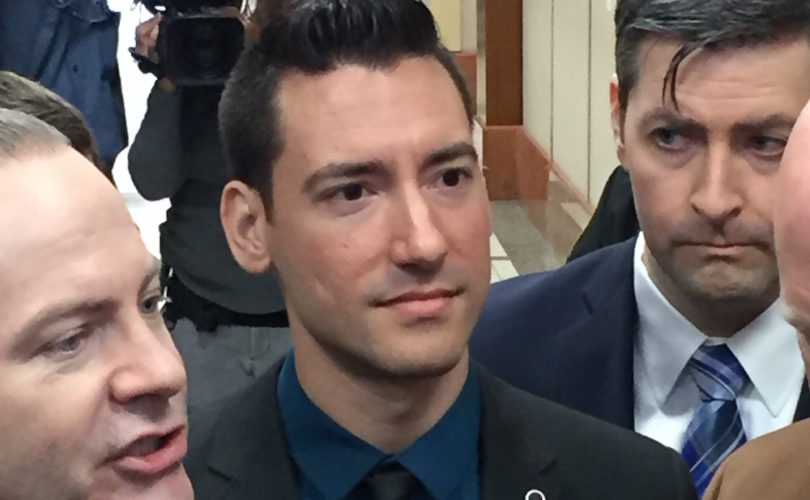 It was the first batch of signatures to be dropped off in LifeSiteNews' ongoing petition. It asks prosecutor Devon Anderson to dismiss the charges facing Daleiden and his fellow investigator Sandra Merritt, which could result in 20 years in prison and a $10,000 fine.

“Houston, we do have a problem,” said Rev. Patrick Mahoney of the Christian Defense Coalition at a press conference at 11 a.m. local time.

“We are standing in solidarity and say, 'When you attack David Daleiden and Sandra Merritt, you are attacking us and our community,'” Rev. Mahoney continued. “Do not proceed with these unjust indictments.”

Congressman Kevin Brady, a Texas Republican, sent a statement to the gathering saying, “Instead of society persecuting the truth tellers, Planned Parenthood needs to answer for their gruesome practices,” as well as apologizing to adoptive families like his own, which the abortion provider has “prevented from being whole.”

The local indictment, made by the Houston-area grand jury last Monday, has drawn national coverage as the first skirmish in a war between Planned Parenthood and those who sought to expose their practices.

“In delivering these petitions, I am representing more than 100,000 people who demand that these charges against this 27-year-old man and his fellow investigator be dropped at once,” said LifeSiteNews reporter Lisa Bourne.

“The next move is up to the Harris County DA's office,” she said, reading a statement prepared by LifeSiteNews. “These petitions prove that the world is watching.”

“The indictment is another example of Planned Parenthood's bare-fisted intimidation tactics,” she added, similar to campaigns taken against former Kansas Attorney General Phill Kline and the Susan G. Komen Foundation.

Andy Parrish, PR director for LifeSiteNews, who was in Houston with Bourne, said he was honored to tell David of the 106,000 LifeSite petition signers who were standing with him. “These signatures are just the beginning. The coalition standing behind David is growing. We've got 100,000, but let's double that.”

David Daleiden addressed the crowd alongside two of his attorneys, Peter Breen and Briscoe Cain, and thanked all those who showed their support for him during his latest legal showdown.

“I just want to say thank you to everyone at LifeSiteNews and everyone who shared the petition, who signed it, and made it possible to deliver that today,” Daleiden told LifeSiteNews. “It means a lot to me, and to Sandra, and to the Center for Medical Progress. Thank you for your faithfulness and for standing up for us.”

He hoped everyone would remain united in demanding justice be done – and, like Cheryl Sullenger of Operation Rescue, hopes that Planned Parenthood Gulf Coast be indicted.

“I firmly believe that if we stay the course, if we stay together, we will bring about a day when there is no longer a price tag on human life,” Daleiden said.

During the windy 45-minute-long press conference, speakers at the rostrum defended Daleiden's undercover journalism tactics in the face of sometimes hostile questions from the established press.

“No one can deny that this was the number one investigative journalism story of 2015,” Rev. Mahoney said, citing statistics of the story's impact on the mainstream media.

In the new media environment of 2016, someone does not need a degree from Northwestern or Columbia to be a journalist, he said.

“He broke one of the biggest stories of the year,” agreed John Hawkins of Right-Wing News, who sent in a written statement to the conference. Pressing charges against him sends a message to conservatives and Christians: “Sit down and shut up, or this just might happen to you.”

“If this were a meat-packing plant investigation, there would be no question about his integrity,” said Alexandra Snyder, executive director of the Life Legal Defense Foundation. “He would be universally lauded as a hero. I think he's a hero…for getting the truth out.”

“In the meantime, we're going to do everything we can do to stand with David,” she said, “and see justice prevail.”

WATCH: David Daleiden turns himself in