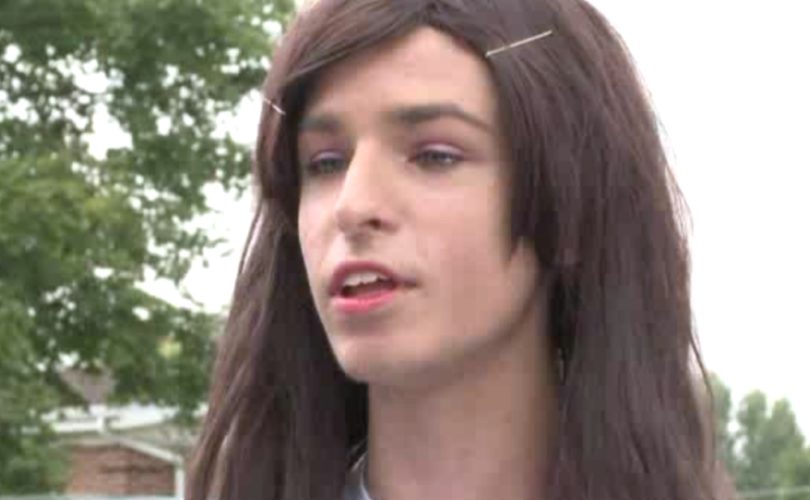 High school senior Lila Perry was offered a gender-neutral washroom, but insists on using the one reserved for girls.

HILLSBORO, MO, September 3, 2015 (LifeSiteNews) — At least 150 students, many backed by their parents, walked out of school earlier this week to protest a boy's use of a female locker room.

And while Lila Perry, who believes himself to be female, says his detractors are acting out of “pure and simple bigotry,” others say the situation isn't as simple.

Student Sophie Beel told a Fox affiliate, “I find it offensive because Lila has not went through any procedure to become female; putting on a dress and putting on a wig is not transgender to me.”

Likewise, 47-year-old Jeff Childs held a sign saying “Girls Right Matter,” and told the St. Louis Post-Dispatch that “this needs to stop before it goes too far.” Childs, who has a niece and nephew at schools in the district, said he is “not trying to be ignorant, but [Perry] is bringing it out in public for everybody else to deal with.”

The situation has escalated in recent months. The 17-year-old Perry has had no operations or other treatment for his alleged dysphoria, but has identified as female since the age of 13. He wears a wig and dresses.

Perry was offered a private, gender-neutral restroom, but he turned it down. “I wasn’t hurting anyone and I didn’t want to feel segregated out. I didn’t want to be in the gender neutral bathroom. I am girl, I shouldn’t be pushed off to another bathroom,” he said.

Local news indicate that 30 to 40 students backed Perry, who says claims that he is faking his dysphoria in order to gain access to females is not true.

“I’m not going to hurt their daughters. I’m not going to expose myself. I’m not a pervert; I’m a transgender woman; I’m a girl,” Perry told Fox 2 Now. “I’m just in there to change, do my business, and that if they have any questions about being transgender, they are more than welcome to talk to me, and I’ll be happy to explain it.”

“It wasn`t too long ago white people were saying I don`t feel comfortable sharing a bathroom with a black person and history repeats itself,” said Perry.

Some officials say the school must provide accommodations for Perry's dysphoria. However, one cited requirement — that the school risks losing federal funding if it doesn't provide special protections to transgender students — was described by an Alliance Defending Freedom attorney as “politically motivated.” That attorney told LifeSiteNews that the regulation, which is based upon an Obama administration rewrite of the 1972 Title IX gender equality law, has no binding effect on schools who choose to ignore it.

During the protest, which lasted about two hours, Perry was locked in the principal's office, allegedly for his safety. Perry says he has been harassed and bullied on social media for his dysphoria.