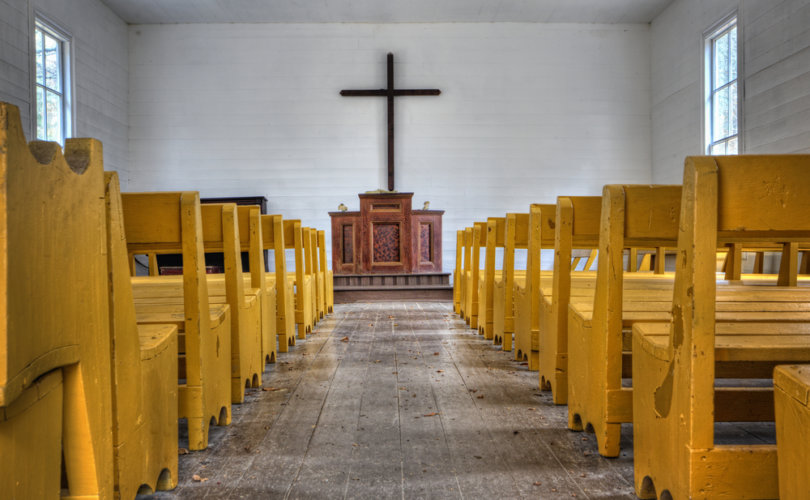 WASHINGTON, D.C., August 9, 2016 (LifeSiteNews) – While most American churchgoers were hearing about political and social issues from their pastors at church in recent months, less than a third received any message about abortion.

Fewer than 3 in 10 Americans said their pastors talked about abortion, according to a new Pew Research Center survey.

The 29 percent figure representing churchgoers who heard about abortion from the pulpit was sampled as the political season transitioned into the general election campaign and was only marginally higher than the number who heard from their church leaders on immigration (27 percent).

The survey was conducted online and via mail from June 5 to July 7 with a nationally representative sample of 4,602 adults, taken from the 40 percent of Americans who reported attending religious services at least once or twice in the few months before the poll was done.

About two-thirds of the group (64 percent) reported hearing clergy at their church or other place of worship talk about at least one of the six social and political issues referenced in the survey, with close to half (46 percent) saying their religious leaders had preached about more than one of the issues.

The hot-button subjects of religious liberty and homosexuality were spoken about most by pastors, with 4 in 10 Americans saying they heard about each of them in church during the survey period. These were followed by abortion and immigration, both hovering around the 3 in 10 mark, with the environment and economic inequality at the bottom of the survey list for those having heard about them in church, at 22 percent and 18 percent, respectively.

Of the U.S. churchgoers who did hear from their clergy on abortion during the spring and early summer, 22 percent said their church leaders spoke against it, 3 percent had their clergy preach in favor of abortion, and 4 percent heard both for and against messages.

In terms of favorable preaching on abortion, 3 percent of black Protestants said they heard it from their clergy during the survey period, as compared to 2 percent of Catholics and 1 percent each of white evangelicals and white mainline Protestants.

Six percent of Catholics reported hearing messages both for and against abortion from their pastor, where that number was 5 percent for black Protestants, 2 percent with white evangelicals and 1 percent for white mainline Protestants.

While the 1954 Johnson Amendment forbidding churches from endorsing candidates has been attributed with chilling free speech among pastors, resulting in many avoiding mention of political issues while preaching for fear of losing their tax exempt status, the Pew results said 14 percent of Americans who attended church during the survey period reported their church leaders had spoken either in favor of or in opposition to one of this year’s presidential candidates.

A comparable portion of churchgoers (11 percent) said they had heard religious leaders speak out against a candidate, with 7 percent saying their pastor spoke in opposition to Trump and 4 percent who heard opposition to Clinton. Those numbers include some people (6 percent) who have heard both positions.

Hillary Clinton, known for her fervent support for abortion and Planned Parenthood, has promised supporters she would enact the greatest expansion of abortion funding in U.S. history.

In her acceptance speech at the recent Democratic National Convention, she affirmed the party’s platform, which includes repealing the Hyde and Helm Amendments, relaxing state and federal abortion restrictions, and fighting any effort to stop taxpayer funding of the nation’s largest abortion chain, still embroiled in its human body part trafficking scandal.

Donald Trump, who has repeatedly said he would repeal the Johnson Amendment and restore the voice of religion in American discourse, was somewhat tepid in his support for life during the early part of the presidential campaign.

Later on, however, he has continually promised to appoint pro-life and otherwise constitutionalist Supreme Court justices, and his running mate, Indiana Gov. Mike Pence, has vowed that he and Trump will send Roe vs. Wade “to the ash heap of history where it belongs.”