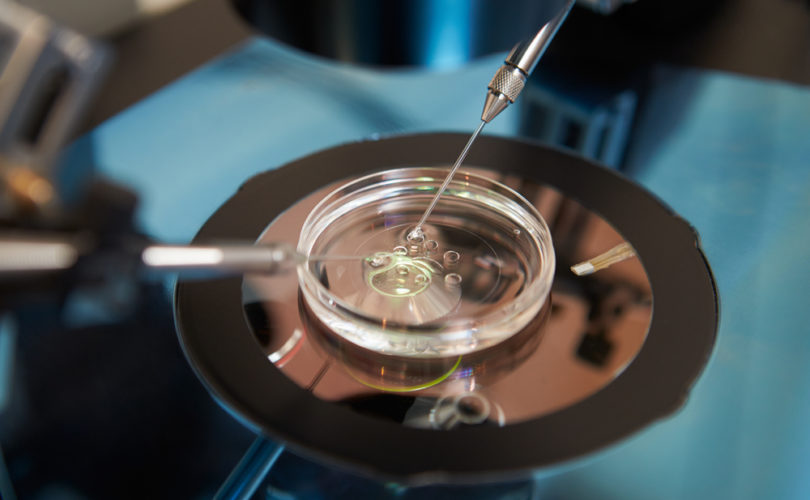 LEICESTER, England, September 13, 2016 (LifeSiteNews) — Statistics show that women are delaying both marriage and having children, with a rapidly increasing number of women freezing their own eggs in hopes of having baby in the intentionally distant future.

There are a variety of reasons for this in modern times, led by the “climb the career ladder” feminist culture that downplays domesticity and devalues motherhood. But The Daily Mail has found that the reason more women are freezing their eggs is because they haven't found the right father for their children-to-be.

Researcher Kylie Baldwin, a Ph.D student at De Montfort University, surveyed 31 women who have frozen their ova and discovered the women are actually waiting for a “hands-on” father.

“It was the absence of this particular type of potential father, not just the absence of any partner, that led them to freeze the eggs,” she told The Daily Mail. “It's about having the right dad for their child.”

“None of the women underwent the procedure for career reasons,” Baldwin explained.  Instead, many aggressively pursued their career precisely because they had not found a fatherly man who was as committed to parenthood as they wanted him to be.

Several women surveyed were in relationships with partners that satisfied them personally but weren't “father material,” so they froze their eggs while remaining in the sexually satisfying relationship in the hope that a better man would enter their lives.

Freezing ova for later fertilization was first offered to cancer patients whose treatment caused permanent sterility to allow them to have children after treatment. Now it is most common among women simply choosing to delay motherhood — at a cost of up to $80,000 ($8K per treatment, with as many as 10 treatments).

The “bottom line,” it seems, might be summed up in the old adage, “Why buy the cow when you can get the milk for free?”

Britain's leading fertility doctors have noted that modern men are far more reluctant to commit to having a family, let alone commit to one woman.

“Young men are not committed to relationships in the way they have been in the past,” Professor Adam Balen, chairman of the British Fertility Society, told The Daily Mail.

But the women have been sold a lie.

In vitro fertilization pioneer Robert Winston admitted that IVF has been “grossly oversold by commercial interests with very little practical chance of a baby in most instances.”

Of all the British women who have frozen their eggs in the past 15 years, only one in 63 have borne a baby.

Dr. Geeta Nargund, medical director of Europe's largest IVF clinic, admitted as well that in today's sexual revolution men are no longer under obligation to become a father.

The last verse of the Old Testament says the Spirit of the Lord turns the hearts of fathers to their children.

Pro-life leaders say the whole premise is a perversion of goodness and love, designed to work against men taking responsibility as husbands and fathers. “The entire IVF process is immoral and just wrong,” American Life League Executive Director Jim Sedlak told LifeSiteNews. “IVF separates the two inseparable parts of licit sexual union — the procreative and the unitive. Obviously, with IVF there is no unitive aspect.”

“Freezing women's eggs for potential future use in IVF simultaneously preys on their fear of remaining childless and gives a false sense of security,” Human Life International’s (HLI) Dr. Joseph Meaney told LifeSiteNews. “A legitimate desire to have children is being instrumentalized in a misleading way. The very procedure used to obtain the eggs can contribute to future infertility.”

“The ‘success’ rates of IVF are abysmally low, particularly with women in their 40s, which is what is being sold with these schemes,” Meaney, HLI’s Director of International Outreach and Expansion said.

Sedlak agrees, adding that in vitro fertilization kills far more babies than it delivers “IVF babies are screened and many are put to death before others are frozen,” Sedlak explained.

“The process of unfreezing a living human being is fraught with problems and, in many cases, leads to their death,” Sedlak said.

Furthermore, IVF babies are statistically at much greater risk for health problems. “Even if they live through the unfreezing, implanting in the womb and living until birth present many more problems,” Sedlak notes.

“There is no scientific ‘fix’ to the problem of meeting Mr. Right and having children in a loving family,” Meaney concluded. “To suggest otherwise is fraud.”

“It is time the human race recognized that children are not a commodity. Not some trophy,” Sedlak concluded. “They are a gift from God, and should be created as the result of a loving embrace by mother and father and grow to be nurtured by those same two individuals — God permitting.”