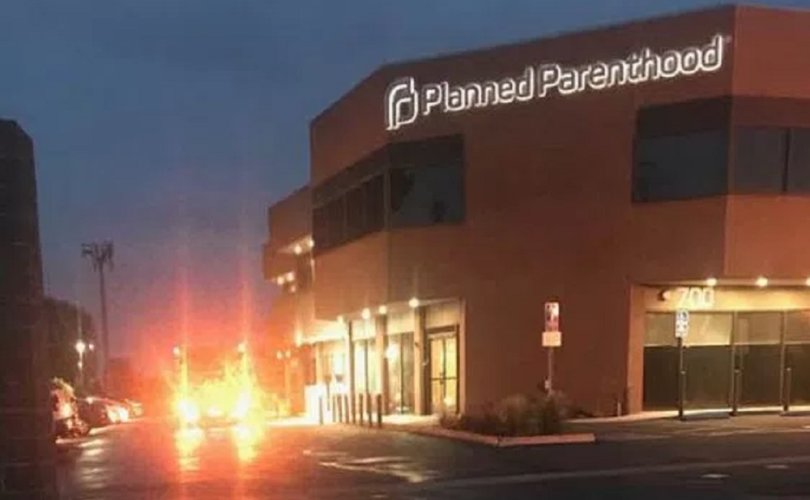 March 22, 2018: An ambulance transports a patient from the Planned Parenthood abortion facility in Orange, California, just after 6:30 A.M.Operation Rescue

March 26, 2018 (Operation Rescue) – It was still dark when pro-life activists arrived at the Planned Parenthood abortion facility in Orange, California, for an early-morning prayer shift on March 22, 2018. As the first hints of light announced an impending sunrise, their prayers were disturbed by an unusually high number of cars speeding into the parking lot. A few minutes later, at around 6:30 a.m., the fire department and paramedics arrived on the scene.

Witnesses observed a woman being brought out of Planned Parenthood on a gurney. She was loaded into the awaiting ambulance and rushed away – presumably to a nearby hospital where she could get the emergency treatment she needed.

As one of the most liberal states on abortion in the country, California continues to adjust safety laws in favor of abortion businesses – all at the cost of patient safety.

On January 1, 2018, changes to California's abortion clinic licensing law dropped the requirement that abortion facilities maintain hospital transfer agreements, while maintaining the requirement for birthing centers. The changes to §1204.2 were supported by Planned Parenthood organizations in California and opposed by Right to Life affiliates.

“It seems crazy for California to recognize the need for smooth and speedy transport for women who may have complications during childbirth, but if during an abortion, a woman's uterus is perforated or she is hemorrhaging to death, she is not assured the same protections under the law,” said Troy Newman, President of Operation Rescue.

Why does California treat these women as second-class citizens? It is because the state government is dominated by Democrats who are radical supporters of unrestricted abortion and aggressive protectors of Planned Parenthood. This political climate has prioritized the desires of abortion businesses to be less accountable over the health and safety of women.

For women like the one transported by ambulance from Planned Parenthood in the early morning of March 22, they are left vulnerable to patient dumping.

“We have documented cases where abortion facilities have dumped women on unprepared hospital emergency rooms, whose physicians are left in the dark about the nature of their injuries. Figuring out what happened and what kind of help the women need takes extra time when speedy treatment can mean the difference between life and death,” said Newman.

Another California law that has recently placed women at additional risk is the 2013 provision that allows nurse practitioners and other non-physicians to conduct abortions in the first trimester.

In the first twelve weeks 2018, Operation Rescue has received reports of 20 medical emergencies at abortion facilities across the nation. While this number is far from exhaustive, it indicates a serious need to keep abortion facilities as accountable as possible. But as long as California panders to abortion businesses, that accountability will continue to decrease while medical emergencies are expected to increase.

“For the state government in California, killing babies is the most important thing. The lives of women who suffer life-threatening emergencies resulting from out-of-control abortionists simply do not matter in practice to these liberal Democrats,” said Newman. “If women actually understood how relaxing laws on abortion facilities devalues them as human beings, there would be an uprising!”

(H/T to Teresa Marsano, who contributed information to this report.)