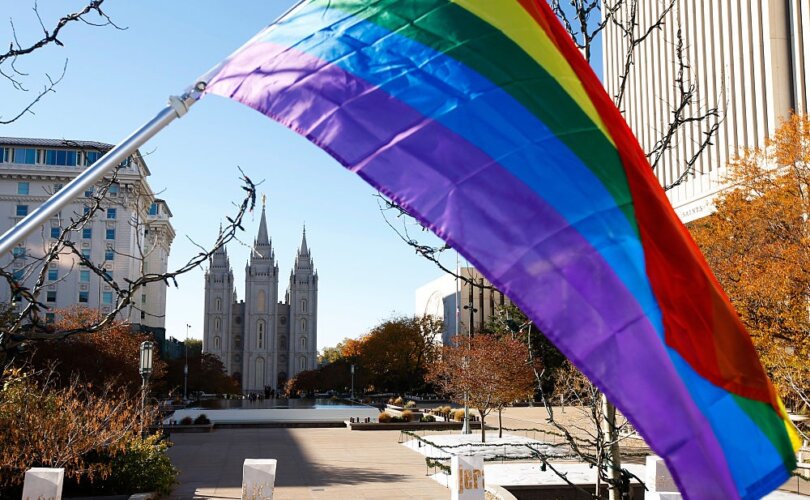 A pride flag flies in front of the Historic Mormon Temple as part of a protest on November 14, 2015 in Salt Lake City, Utah.Photo by George Frey/Getty Images

SALT LAKE CITY (LifeSiteNews) — The Church of Jesus Christ of Latter-day Saints, long seen as a bulwark for conservative family values, sent out shockwaves Tuesday when it gave its support for radical legislation currently before Congress that would enshrine gay “marriage” into federal law. The affirmation comes despite the church’s previous moves to fight LGBT infiltration in the culture.

The LDS made the declaration in a Tuesday statement published on its official website.

According to the statement, while the church’s doctrine “related to marriage between a man and a woman is well known and will remain unchanged,” it believes the so-called Respect for Marriage Act protecting homosexual unions under federal law “is the best way forward.”

We believe this approach is the way forward. As we work together to preserve the principles and practices of religious freedom together with the rights of LGBTQ individuals, much can be accomplished to heal relationships and foster greater understanding.

— The Church of Jesus Christ of Latter-day Saints (@Ch_JesusChrist) November 15, 2022

If passed by Congress, the legislation would federally codify a radical redefinition marriage at odds with all major religions. Catholic bishops, including San Francisco Archbishop Salvatore Cordileone and Bishop Joseph Strickland of Tyler, Texas — along with leading conservative organizations — have warned the measure would pave the way for discrimination against Christians and others who support the traditional understanding of marriage.

As LifeSiteNews has reported, bipartisan carveouts for religious liberty have focused solely protecting religious nonprofits from being compelled to solemnize or celebrate a same-sex “marriage” opposed with that group’s religious beliefs. Notably lacking is any language shielding Christians or other people of faith who simply reject homosexual unions as a form of “marriage.”

Tony Perkins, president of the Family Research Council, issued a stark warning Tuesday that “the misnamed Respect for Marriage Act will accelerate the persecution” of Christians who support traditional marriage “to a level no one ever dreamed.”

Arguing that the legislation’s language is “light years more radical than” the redefinition of marriage by the U.S. Supreme Court in Obergefell v. Hodges (2015), greenlighting crackdowns on “parents, charities, adoption agencies, teachers, Christian schools, counselors, and Bible-believing professionals,” Perkins said “the government would be declaring open season on anyone who believes in marriage as it’s always been: the union of a man and woman.”

Regardless, the LDS Church appeared to accept the narrow safeguards afforded in the radical legislation.

In its Tuesday statement, the church said it is “grateful for the continuing efforts of those who work to ensure the Respect for Marriage Act includes appropriate religious freedom protections while respecting the law and preserving the rights of our LGBTQ brothers and sisters.”

“We believe this approach is the way forward,” the statement continued. “As we work together to preserve the principles and practices of religious freedom together with the rights of LGBTQ individuals, much can be accomplished to heal relationships and foster greater understanding.”

Fox News noted that prior to the LDS Church’s official Tuesday statement, all four of Utah’s congressmen already voiced their support for the bill “despite all of them being practicing members of the church.”

RELATED: Matt Walsh: Republicans who vote for same-sex ‘marriage’ should be ‘exiled from the party’

LifeSiteNews has reached out to the Church of Jesus Christ of Latter-day Saints. This article will be updated if comment is provided.

Meanwhile, news of the Mormon Church’s support for the radical bill has come as something of a shock to conservatives, who have relied on the LDS for its unflinching support of the pro-marriage cause.

As far back as 2008, the LDS Church drew outrage from LGBT advocates for joining other traditional religious groups in supporting California’s Proposition 8 to safeguard the legal definition of marriage as being between one man and one woman.

In 2010, the LDS joined leaders in the Anglican, Baptist, Catholic, Evangelical, Jewish, Lutheran, Mormon, Orthodox, Pentecostal and Sikh communities in an open letter affirming their commitment to traditional marriage as opposed to a legal protection for same-sex unions.

“Marriage is the permanent and faithful union of one man and one woman. As such, marriage is the natural basis of the family,” the letter stated, going a step farther to affirm that “Marriage is an institution fundamental to the well-being of all of society, not just religious communities.”

“As religious leaders across different faith communities, we join together and affirm our shared commitment to promote and protect marriage as the union of one man and one woman,” the statement read.

In 2014, the church vehemently pushed back against the legalization of same-sex “marriage,” affirming that “[c]hanges in the civil law do not, indeed cannot, change the moral law that God has established.”

“God expects us to uphold and keep His commandments regardless of divergent opinions or trends in society,” LDS leaders said.

In 2015, the church released an official document declaring that unrepentant homosexuals within the Mormon community were “apostates.”

That same year, the LDS generated national headlines for blasting the Boy Scouts of America (BSA) — which it had supported for over a hundred years — for its “admission of openly gay leaders,” saying would need to re-examine its collaboration with the organization. In 2018, church leaders announced the LDS Church would cut all ties with BSA after the organization said it would start allowing girls to join in the name of inclusion.

However, recent polling found that support for same-sex unions has skyrocketed among the Mormon population as the LGBTQ agenda has become more firmly embedded in the culture. Earlier this year, Religion News reported that Mormon support for LGBT “marriages” shot up from less than 25% in 2011 to a staggering 46% in 2021.

The Senate is expected to vote on whether to codify the redefinition of marriage into federal law on Wednesday.

LifeSiteNews has launched a Voter Voice and LifePetition enabling conservatives to demand that Republican senators reject the radical bill.