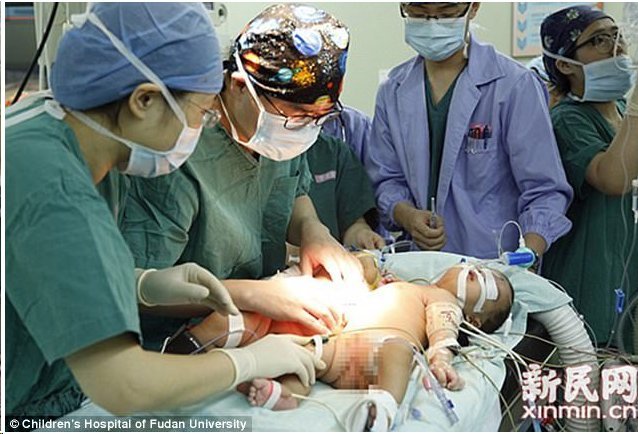 May 11, 2017 (NationalRighttoLifeNews) — Considering the conjoined twins were born in China, notorious for a viciously coercive population control program, which includes forced abortion and involuntary sterilization, their survival and subsequent successful separation is a multiple miracle.

Reporting for the Daily Mail, Tracy You tells us that the mother, identified only by the surname of Liu, learned her babies were joined at the liver when she was about five months pregnant.

You gently puts the situation this way: Liu said “she and her husband decided to keep the twins and did not agree to an induced labour, reported Huanqiu.com, a part of People’s Daily.” Inducing labor that early would mean the girls would die at birth.

“Doctors from the Children’s Hospital of Fudan University in Shanghai received Ms Liu when she was 22 weeks pregnant,” You reported. Ms. Liu had left her hometown in nearby Jiangsu Province to go to Children’s Hospital because in the past two years, doctors had successfully separated two sets of conjoined twins. One set was joined at the hip, the other by the stomach.

Doctors examined Ms. Liu and decided to “help the woman give birth and to carry out the separation after the twins were born… A team was formed to monitor the growth of the twins around the clock.”

Born February 9 when Ms. Liu was 35 weeks pregnant, the babies weighed a combined 10.3 pounds. But in such cases surgeons will not operate until each baby weighs at least 11 pounds. When the girls reached that juncture, a two-hour operation took place the morning of May 8.

According to reporter You, hemorrhaging and/or dysfunctional livers are the primary immediate dangers. Surgeons were aided by 3-D imaging technology and were able to “cut the abnormal blood vessel which connected the two babies by the liver.”

As of yesterday’s Daily Mail report, the twins were doing fine.