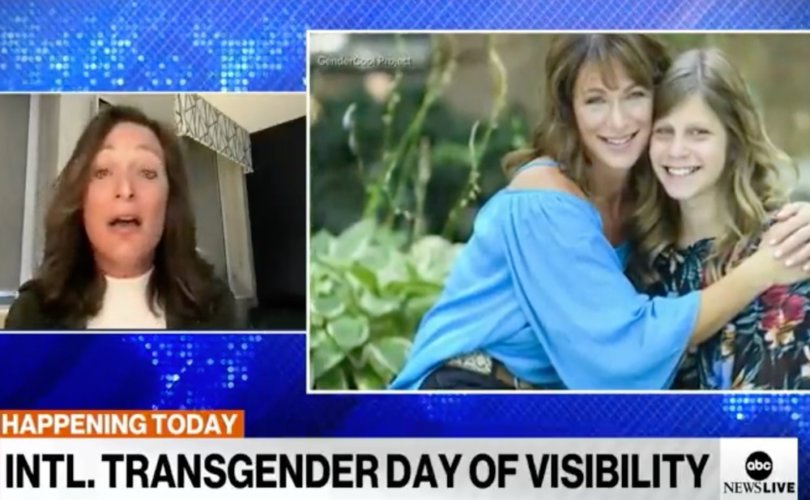 (LifeSiteNews) — The mother of a young boy who believes he’s a girl told ABC News her son communicated his alleged transgenderism “at the earliest moment that” he “actually had words and language.”

Jen Grosshandler, a mother of four boys and the founder and director of the pro-transgender “Gendercool Project,” told the ABC News host Thursday that when one of her sons — whom she now calls her “daughter” — first “began to communicate to us,” which was “at the earliest moment that” he “actually had words and language,” he identified as a girl.

“We were a little surprised because we didn’t expect it,” she said.

For ‘transgender day of visibility,’ ABC news featured a mother who said her “assigned male at birth” child started to communicate being transgender “at the earliest moment that she actually had words and language” pic.twitter.com/kWcNZruBEN

Grosshandler went on to explain that she and her husband “just literally raised” their son “Chazzie” as a girl, supporting him “just like all parents do.”

The boy’s mother said she and her husband are teaching him “the right values,” and “to give back,” adding that one of “Chazzie’s” “favorite things in the world to do is to volunteer and be in service to others.”

During Grosshandler’s comments, images of her family were shown in the screen, depicting the young boy with long hair wearing girls’ clothing.

“That surprise evolves into something just really cool and important,” Grosshandler said, explaining that she and her husband came to  “the realization that” their son was actually “our daughter.”

“And so what I would say to all of those parents our there and all the folks by the way, millions of folks still in our country who say they’ve never met a transgender or non-binary young person, I would say this: I would say, these children are here, and they are wonderful, and all it takes is love,” she said.

The transgender activist organization founded by Grosshandler, GenderCool, is billed as a “youth-led movement bringing positive change to the world,” according to its website.

Grosshandler’s son has a profile on the site, where he is described as a “15-year-old high school freshman with passion for volunteering” whose pronouns are “she/her.”

According to the website, the teenager’s “personal journey was the inspiration behind The GenderCool Project, a national storytelling campaign and movement helping to replace misinformed opinions with positive, powerful experiences meeting dynamic young people who identify as transgender and non-binary.”

RELATED: Woman who lived as a man explains how the internet drives teens to embrace trans ideology

The profile states that “Chazzie” “realizes that by telling” people about his journey the teen “is helping people understand that transgender and non-binary kids are just like all other kids.”