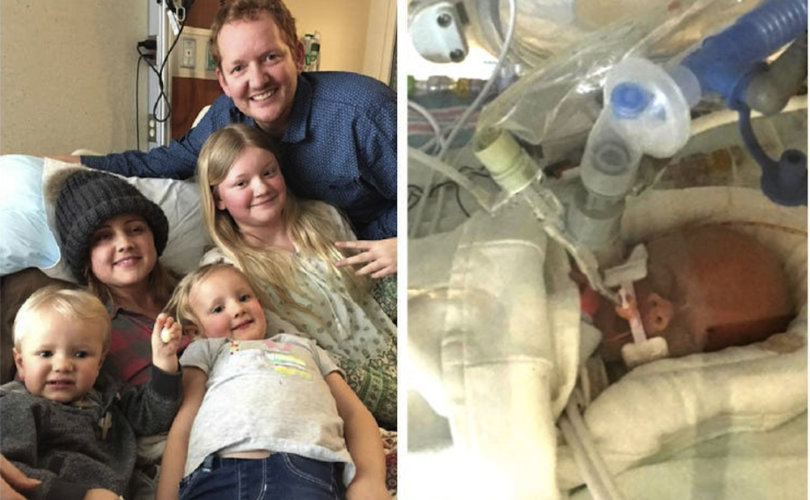 Carrie and Nick DeKlyen with their family (left) in the hospital and baby Life Lynn (right). Facebook

ANN ARBOR, Michigan, September 12, 2017 (LifeSiteNews) — A Christian mother of five gave up her only chance for life to give life to her sixth child.

Carrie and Nick DeKlyen were stunned in April by tests that showed Carrie’s headaches were caused by a brain tumor. “You think you are going in for migraine headaches,” Nick shared. “The doctors came back and said, ‘You have a mass on your brain, but it doesn’t look like cancer.’“

The full-time homemaker known for her loving and generous spirit immediately underwent surgery to remove the tumor at Mercy Health Saint Mary’s Campus in Grand Rapids.

The DeKlyens’ hopes were dashed yet again when tests showed the tumor was cancerous. Within weeks, the tumor grew back. Worse, the type of cancer she had, Glioblastoma, spreads rapidly and is terminal.

Glioblastoma multiforme cells grow quickly, but Carrie qualified and was accepted into a promising clinical trial that could prolong her life for a decade or more.

Then an unexpected complication came: Carrie was found to be eight weeks’ pregnant.

Doctors told Carrie that if she went ahead with the clinical trial, her preborn baby would have to be aborted. The only other option was chemotherapy, which might give Carrie a few years but would certainly kill her baby.

“We talked about it and prayed about it,” Nick said. “Even with everything on the table, my wife chose the baby.”

That fateful May, Carrie was resolute. She and Nick are pro-life believers, not just in words but in deeds. Married 17 years, they met in church when Carrie was 10 and Nick was 12.

After a second surgery to remove as much as possible of the recurrent tumor, Carrie cancelled plans for the potentially life-saving clinical trial and life-prolonging chemotherapy.

Carrie reportedly said, “All the treatments, I’m not doing any of them.”

The surgeon replied, “If you choose to do this, you will not live another 10 months. I promise, you will die.”

“We love the Lord. We’re pro-life,” the DeKlyens explained. “We believe that God gave us this baby.”

Carrie decided to forgo her own treatment and hold out as long as possible to give her baby a chance at life. Thirty-two weeks is all she wanted, she said. Family members supported her decision.

By June, the tumor was back but inoperable. Carrie was taken to the University of Michigan in Ann Arbor. The only thing doctors could do was drain the fluid buildup that was pressuring Carrie’s brain.

In July at 19 weeks’ gestation, the pain was so great that Carrie went back to Ann Arbor in convulsions. She suffered a stroke in the emergency room and went into a coma.

“They said that she had a massive stroke,” Nick related. “They said the fluid built up so much the cranium had no place to go.”

Nick followed his wife’s deepest wishes and authorized a feeding tube and respirator to keep Carrie alive so their daughter could grow strong enough to deliver.

By August, Carrie’s brain was under such pressure that the surgeons had to remove her skull to keep her going.

At 22 weeks, the baby’s growth slowed. Two weeks later, the preborn girl had grown sufficiently but had stopped moving. Doctors told Nick that he could do nothing and hope for the best, or he could authorize an emergency C-section delivery. They said they felt it was the baby’s only chance of survival.

Life Lynn DeKlyen was born at 5:30 p.m. Wednesday, at one pound, four ounces. The couple chose the baby’s name before Carrie’s tumor was discovered.

“I went to the surgeon and said my wife had had enough,” Nick said. “She chose to have the baby. That’s what she wanted, and I supported her. She had the baby, and now it’s time to go home. She’s going to heaven. She’s going to be healed.”

Doctors disconnected Carrie’s feeding tube and respirator. Elijah, 18, Isaiah, 16, Nevaeh, 11, and Dad spent Thursday sitting with their mom at her death bed. “I sat by her the whole time,” Nick said tenderly. He held her hand, kissed her and told her, “You did good.”

In the wee hours of Friday morning, Carrie opened her eyes and then closed them. She squeezed her hands, then let go and stopped breathing at 4:30 a.m.

“She gave up her life for the baby,” Nick told The Washington Post. “I just want people to know that my wife loved the Lord. She loved her kids. She put anybody in front of her needs … above herself.”

“Carrie, we love you and we will miss you, but your legacy will live on,” the DeKlyens’ Facebook page reads. “You have touched so many lives and your love for Jesus was evident in the way you lived your life … We know we will see you again!”

Life DeKlyen is now in intensive care doing well. “The baby is doing better than anyone expected,” Nick said the day after Life’s birth. “She is healthy, and she’s almost breathing on her own.”

Nick stays at the Ann Arbor Ronald McDonald House between frequent trips home to the Grand Rapids suburb of Wyoming to check on their children, Elijah, Isaiah, Neaveh, Lelia, 3, and baby Jez, 1.

Nick sold his stake in a vending business months ago to care for Carrie, and now his family’s only means of support is GoFundMe page donations.

“By this we know love, that he laid down his life for us; and we ought to lay down our lives for the brethren.” 1 John 3:16.

“This life is so quick,” Nick commented. “I’m going to pass away, and I’m going to see her again. I understand that. That gives me peace.”