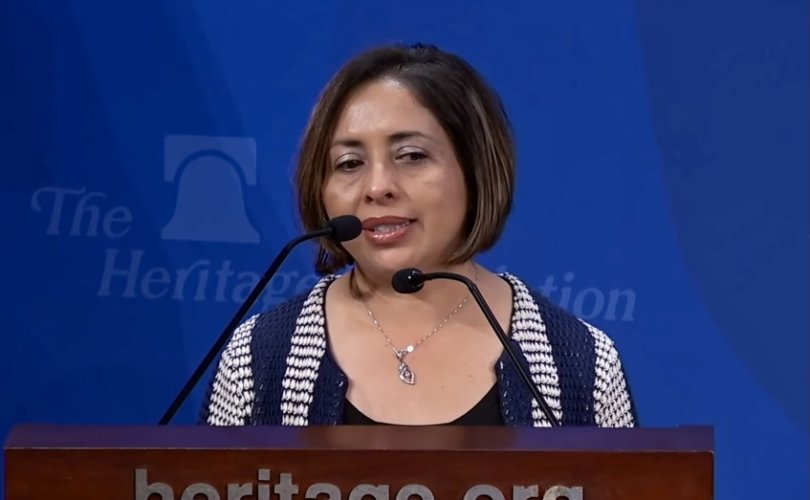 (LifeSiteNews) — A mother spoke at a Heritage Foundation conference to share how the LGBT agenda in the school system and government led to her teenage daughter’s suicide.

In a heartfelt presentation for the Heritage Foundation on March 7, American mother Abigail Martinez outlined how the government and the public school system indoctrinated her daughter into thinking she was a “transgender” boy. Martinez explained that the push toward the LGBT lifestyle that her daughter experienced ultimately led to the California DCFS (Department of Children and Family Services) taking her out of the Martinez home and ended with the teenage girl committing suicide.

In the beginning of the speech, Martinez explained how her daughter was the stereotypical “girly girl” growing up, who enjoyed to play “dress-up” and other traditionally feminine activities.

After suffering through a period of bullying, Martinez’s daughter began showing “signs of depression” in middle school. Upon her child’s transition into high school, the depressed mood only continued to worsen, causing Martinez to ask the school to “keep an eye” on her child.

According to Martinez, without her knowledge, her daughter eventually started attending the “LGBT” group at school, and came home explaining that she was now a “boy.” Martinez said she knew that a so-called transition would not fix the problem, and that her daughter had a “mental health” issue not a gender identity issue.

Martinez’s desire for her daughter to seek mental health counseling before taking drastic steps such as so-called hormone therapy was seen as a red flag by school administrators, who reported to the DCFS that her daughter would “be better off out of the house.”

According to Martinez and Heritage Foundation senior research fellow Jay Richards, Martinez’s daughter was “incentivized” to agree with being removed from the home, because she was told that if she was under the custody of the state of California, the state would pay for her so-called transition.

The DCFS agreed with the school and concluded that since Martinez was apprehensive of her daughter’s desire to mutilate her healthy body before undergoing a psychiatric evaluation, she was unfit to be her child’s caregiver, and the DCFS removed the then 16-year-old girl from the care of Martinez.

According to Martinez, she was only allowed to visit her daughter “once a month,” and only under direct supervision. Martinez said she was also instructed to not talk about certain topics to her own daughter, including any references to “God.”

In tears, Martinez explained that it was during this time when her daughter was removed from the home for the purposes of “transitioning” that she tragically took her own life.

“I don’t have my daughter anymore … September 2019 … she decided to take her life away,” Martinez stated.

“She went to the railroad track, I was told that she just walked in front of the train, lay on her knees, raise her hands, and took her life away,” the mother sobbed.

In her concluding remarks, Martinez said that she wants “everyone to know what happened to our family, because it didn’t have to happen.”

Martinez’s story is not an isolated incident. According to the American Academy of Pediatrics, 50.8 percent of adolescent women who “transition” to young “men” attempt suicide, compared with just 9.8 percent for the biologically male population.

Just earlier this week, victims of the transgender movement celebrated what they call “Detrans Awareness Day.” On “Detrans” day, young people shared their stories about how they were indoctrinated into thinking they were the opposite sex, and the negative impacts attempting to “transition” had on their lives.

“Detrans” refers to those who “transitioned” into the opposite sex but regretted the decision and “de-transitioned” back into their original sex.

when i was 15, lonely, and hated my body, i got sucked into gender ideology online.

my school encouraged me and i was easily prescribed a high dose of testosterone at 18, and it was very damaging.