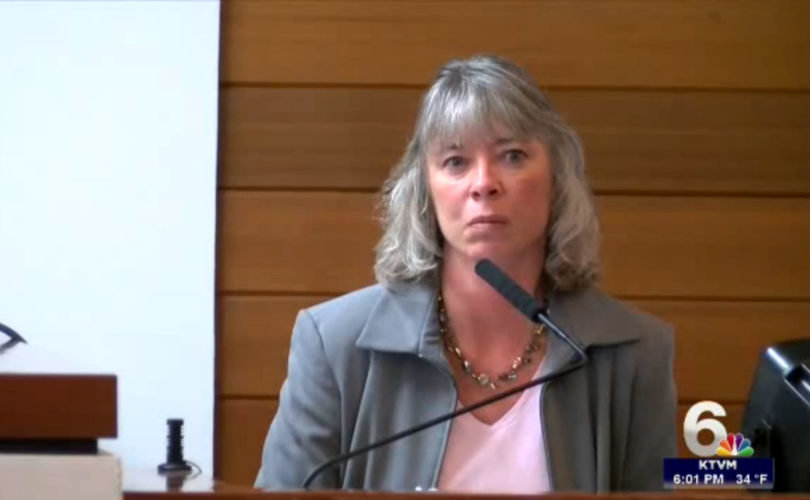 Kerrie Evans testifies during the hearing into her wrongful death lawsuit.NBCMontana video screenshot

BOZEMAN, Montana, February 16, 2016 (LifeSiteNews) – A mother suing her health care providers for millions of dollars because they did not diagnose her daughter's serious illness in utero, depriving her of the ability to abort, has lost in court.

“I would have had an abortion,” Evans testified last week, according to a St. Louis Post-Dispatch report, saying she said she had not been given any information on cystic fibrosis carrier screening. Her daughter, who has the disease in a severe form, is now six years old.

Evans said that she believed that the chorionic villus sampling (CVS) test she had requested would have shown the existence of Down syndrome or cystic fibrosis in her pre-born child. A positive result on either would have spurred her to abort.

The jury deliberated for approximately two hours before finding that Scanson, of Livingston, and Peters, of Bozeman, did not deviate from the standard of care in Evans's prenatal treatment.

The lawsuit was initially filed in 2011 seeking $14.5 million in damages, which included $10 million for the child's medical care.

The clinic and Scanson had requested that the case be dropped, their attorney, Julie Lichte, saying at the time that Evans and herhusband Joe were suing “for a missed opportunity to abort their daughter” and that they would be asking “the jury to award them damages for the very existence of their daughter.”

Montana is not among the roughly one dozen states to prohibit “wrongful birth” lawsuits, but it is likewise not one of the 20 or so that do specifically allow for them.

Despite the contention that with no legal recognition for “wrongful birth” in Montana, the Evans suit would have a dangerous legal precedent, Judge Salvagni rejected the motion to dismiss in 2012, ruling that the suit was not likely to cause a flood of similar claims and could go forward.

Evans acknowledged under cross-examination that she did not read a cystic fibrosis pamphlet she received during her first appointment with Scanson, the Post-Dispatch report said.

The cystic fibrosis pamphlet said the first step would be a blood test to determine if the mother was a carrier for the disease, and then, if so, the father would be tested. If both were carriers, there would be a 25-percent chance of them having a child with the disease.

Attorneys for Scanson and Peters also pointed out that both of those blood tests would have to have been done before the lab performing the genetic testing would know which of the hundreds of mutations of cystic fibrosis to test for.

Peters said he offered carrier screening to Evans before performing the CVS, but she declined.

Evans can't say she was glad her daughter was born and in the same breath say, “I need money because I would have terminated,” Lisa Speare stated.

The amount Evans's attorneys asked for dropped from the original amount in the suit, with their asking in closing statements for just over $2.5 million.

Mom files complaint against abortionist for ‘wrongful birth’: thanks God for her ‘little angel’