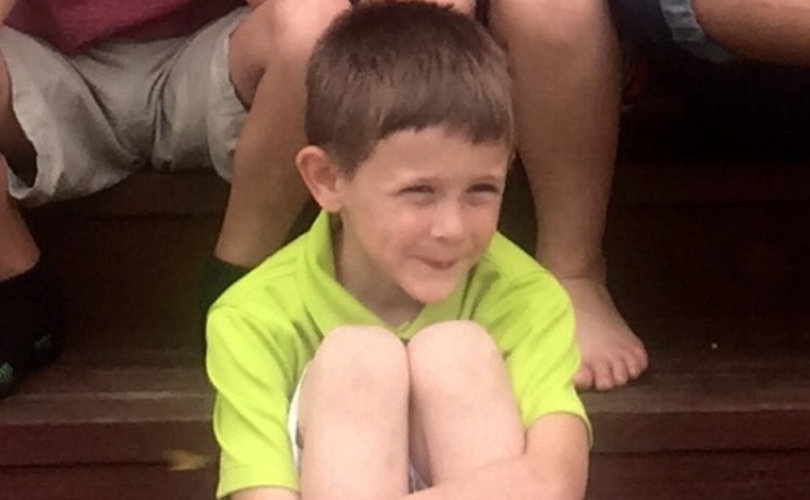 CONRAD, Montana, September 30, 2016 (LifeSiteNews) — Seven-year-old Allen Calloway may be still alive in St. Vincent’s Hospital in Billings thanks to a court order making his mother, Tasha, his guardian and giving her the power to veto a test the hospital sought to determine whether he was “brain dead.”

“The ruling is quite significant because it keeps decision-making with parents,” Dr. Paul Byrne of the Life Guardian Foundation told LifeSiteNews. “Further, it requires permission from parents or someone to do the harmful, cruel, potentially lethal procedure of apnea testing.”

The dispute raises the issue of “brain death,” which, according to Byrne, is a concept developed to maximize opportunities to harvest internal organs from people who are still alive but comatose.

Allen nearly drowned on July 22, but paramedics pronounced him alive and took him to the hospital in Billings still “spontaneously breathing.” When his condition worsened a week later and he needed a respirator to breathe, the hospital conducted tests designed to satisfy the conditions of Montana’s Uniform Determination of Death Act for declaring him “brain dead.”

The tests are supposed to reveal whether “irreversible” damage has been done to the brain and, if so, allows the hospital to disconnect him from routine bodily sustenance, or given the boy’s overall health, to keep him alive in case his family consented to an organ donation.

“It is in the best interest or the transplant industry when there is no consent to transplants that the person who is found brain dead very quickly becomes really dead so that the public does not find out the lie being told,” Byrne told LifeSiteNews.

Allen’s mother, Tasha Stone, and her partner, Clint Stone, told the court they were not advised initially that the tests were to confirm “brain death.” According to their testimony, they believed “the procedures were being conducted to determine the health of A.C.’s brain.”

Moreover, the apnea tests, which involved cutting off the respirator, caused Allen distress, at least according to Stone, who was present. The results led medical staff to conclude the boy was “brain dead” and they sought to retest him.

While hospital staff told the court apnea tests were safe, Byrne told LifeSiteNews that the body is overloaded with carbon dioxide, not only causing discomfort but risking injury. “Sometimes people die from it.”

Asked for consent for yet another apnea test, the mother refused permission and sought a court order confirming she was Allen’s guardian and that she had the legal authority to refuse medical procedures. Judge Robert Olsen granted her guardianship and confirmed that it gave her such power, though the hospital disputed the judge’s ruling.

Olsen noted that parental rights were “perhaps the oldest of the fundamental liberty interests the Supreme Court has recognized under the Due Process Clause” of the Constitution and they include the right to make medical decisions in the child’s interests. And while a court could override parental rights to save a child’s life, in this case the parents were trying to save their child’s life while “it is the hospital and its personnel who are administering medical procedures that could lead to the termination of A.C.’s life.”

Byrne, an activist against organ transplants, notes that there are several indications that “brain death” is misleading. In the United Kingdom, for example, organ harvesters must anaesthetize the donors before opening up their bodies to alleviate pain. “A corpse does not feel pain,” Byrne told one interviewer. “And several unconscious women who met all the criteria for brain death nonetheless have given birth. A corpse does not bear children.”

Byrne said Callaway is now being treated to reduce the swelling in his brain in order for it to heal and be restored to normal function. He added that research into treatment for brain injuries is being hampered by the transplant industry’s reliance on “brain dead” patients. “Every organ that is harvested comes from a living person like Allen. His organs are worth a million dollars at least and as much as $5 million.”

“We feel the hospital was deceptive and unprofessional at first,” Tasha Stone told LifeSiteNews. “But they have been very helpful since the court ruling in getting Allen prepared for returning home.”

The Stones are revamping what is now their classroom (they are homeschoolers with seven children) to provide Allen a ground floor bedroom, and they are acquiring two respirators (one for backup) and two generators because winter power outages are common in rural Montana.

“Allen won’t be on any special medications,” Mrs. Stone reported. “All we hope and pray for is that he will wake up.” She asked for prayers.