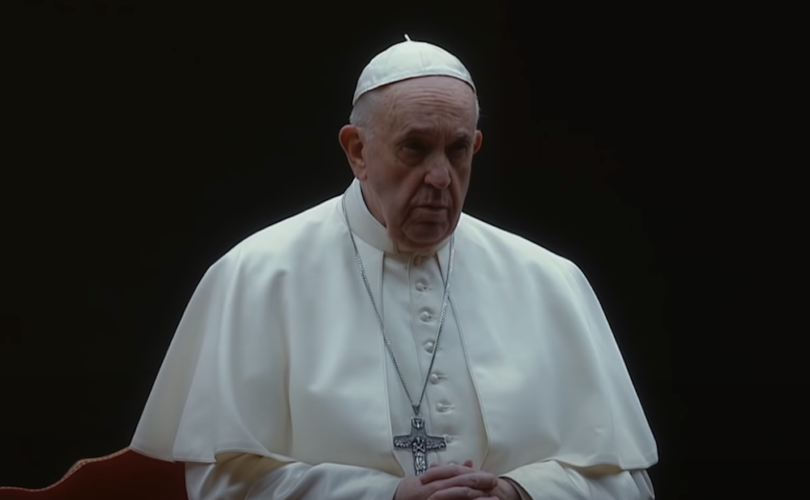 Pope Francis in the 2020 documentary “Francesco,” in which he expressed support for same-sex civil unions in violation of Catholic teachingPFX/YouTube screenshot

(LifeSiteNews) – Catholics must reject statements that contradict the faith even if the Pope utters them, Mother Miriam said in a recent episode of LifeSite’s “Mother Miriam Live!”

“When the Pope says what is sinful, what is inaccurate, what is against the faith,” said the Benedictine prioress, “not only do we have the right to not believe, but we should not believe. We must follow God and not men, even when that man is the Holy Father, if he does not speak what is true.”

“The first one we obey is God, always,” Mother Miriam stressed. “And if the Pope teaches something contrary to the Faith or what God has spoken through his Word or in the Natural Law, then we do not obey. We do not obey the Pope.”

The Catholic Church teaches that Christ endows the Roman Pontiff with the charism of infallibility in matters of faith and morals, but that he only exercises infallibility “when, as supreme pastor and teacher of all the faithful … he proclaims by a definitive act a doctrine pertaining to faith or morals,” as declared by the First Vatican Council.

Her comments echo those of St. John Henry Newman, who wrote in his Letter to the Duke of Norfolk that if a Pope prescribed an immoral act, such as lying, “his command would simply go for nothing, as if he had not issued it, because he has no power over the Moral Law.”

Mother Miriam specifically pointed to Pope Francis’ opinion that COVID-19 vaccination is a “moral duty” and an “act of love.” In a 2020 doctrinal note, the Congregation of the Doctrine of the Faith stated that vaccination is not a “moral obligation,” however.

“So when the Pope says it’s OK to take the vaccine, he went beyond that and said it’s uncharitable not to take it,” Mother Miriam said. “He is wrong in that, he is wrong in other cases.”

“I’m not his judge, but we know the teaching of the Catholic Church.”

READ: Cardiac arrests among the young increase by over 25% in Israel after COVID vaccine rollout: study

She also highlighted a recent message from Pope Francis to LGBT activist Fr. James Martin, SJ, in which the Pope suggested that Catholics who “reject” so-called “LGBT Catholics” belong to a “sect” rather than the Church.

Those remarks are “not true,” Mother Miriam said, pointing out, firstly, that “there’s no such thing as an ‘LGBTQ Catholic.’”

“If you call yourself a Catholic and you are practicing homosexuality or same-sex so-called ‘marriages’ or unions, or if you are active, then you have excommunicated yourself from the Church,” she insisted. “You may be baptized a Catholic, but you are not on your way to heaven and you’re not in good standing with God. You need to repent.”

Mother Miriam added that “those who repent, who live a celibate lifestyle and who honor God, yes, they will be Catholic, but they no longer call themselves ‘LGBTQ’ because they know that that is terribly dishonoring to God.”

“He died for every one of you, everyone. But he will not accept a sinful lifestyle,” she said, stating also that “we can have certain tendencies without labeling ourselves a way that it is not helpful to you, as if God cannot change you or change things around.”

Pope Francis has repeatedly appalled faithful Catholics with his public support of same-sex civil unions, in contradiction to Church teaching, and of the LGBT movement more broadly.
The Argentine Pontiff has sparked controversy with numerous other dubious statements, such as that “the diversity of religions” is “willed by God” and that “apostates” are included in the communion of the saints, as well as with his 2016 apostolic exhortation Amoris Laetitia and the “Pachamama” scandal, among other things.

Same-sex ‘marriage’ is ‘not love at all’

In an earlier segment, Mother Miriam also dismantled a listener’s claims that there can be “loving homosexual ‘marriages’.”

“There is no such thing as a homosexual ‘marriage,’” she corrected. “There is such a thing as homosexual relationships. But a marriage is between a man and a woman, not between two men or two women. That’s what God has created.”

“There’s no such thing as ‘loving homosexual “marriages”.’ There’s no. Such. Thing.”

Mother Miriam: Catholics who support LGBT movement are ‘on the way to hell’
Mother Miriam: ‘Someone needs to tell’ Biden, pro-abortion ‘Catholics’ they’re going to hell