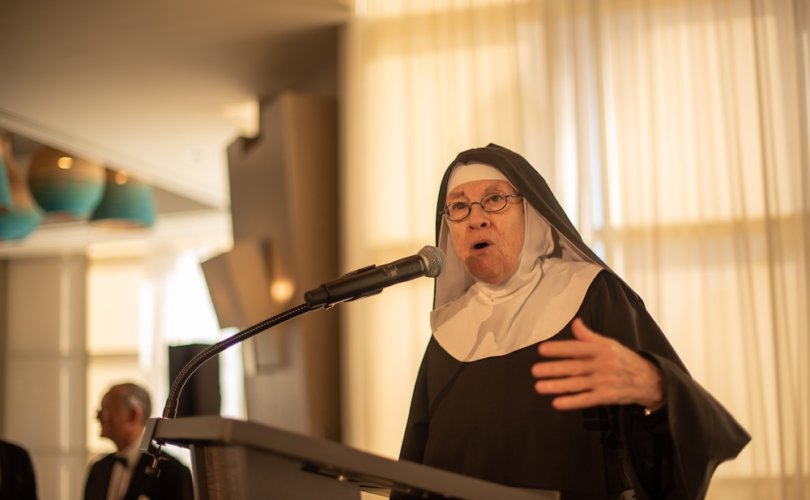 (LifeSiteNews) – Popular Catholic apologist Mother Miriam blasted Democrats’ same-sex “marriage” bill and its Republican supporters, who she said have “turned against God” and betrayed their voters.

On Wednesday’s episode of Mother Miriam Live!, the fiery Benedictine nun warned listeners about the so-called “Respect for Marriage Act” (RFMA), which would enshrine homosexual “marriage” into federal law and make it virtually impossible to undo the Supreme Court’s disastrous redefinition of marriage.

Mother Miriam called the bill “so evil” and “deceitful” and noted that it would not only codify same-sex “marriage” but would also require the federal government to grant legal recognition to polygamous marriages if a state recognizes them and open the door to new attacks on religious liberty.

“We must tell Republican senators to oppose the Democrats’ radical same-sex ‘marriage’ bill,” Mother Miriam stressed, calling on listeners to sign LifeSite’s petition urging Republicans to defeat the RFMA when it comes before the Senate.

The Respect for Marriage Act passed the House this summer with an unexpected 47 Republican votes, and Democrats are now hopeful that the bill will win enough Republican support to pass the Senate and give Joe Biden his first major legislative victory on LGBT issues. Democrats need 10 GOP defections to overcome the Senate filibuster.

So far, four Republicans senators (Sens. Susan Collins of Maine, Rob Portman of Ohio, Thom Tillis of North Carolina, and Lisa Murkowski of Alaska) have signaled their likely support for the bill, and several more are reportedly undecided. Wisconsin Republican Sen. Ron Johnson initially said he saw “no reason to oppose” it but has since backpedaled on his apparent endorsement amid grassroots backlash.

“I tell you, all of you Republicans, all of you who have allied yourself with a party that believes in God and the Constitution, you have betrayed your people and you have turned from God, and your eternity is at stake,” she continued. “Hell will be filled with people who have voted for the Respect for Marriage Act and who live its freedoms, so to speak.”

Polling shows broad disapproval of the RFMA among Republican voters, with at least 50 percent opposing it, including nearly 40 percent who strongly oppose it, and only around one-third in favor, according to a new Politico/Morning Consult survey.

And while some Republicans have quietly weakened on same-sex “marriage” in recent years, Mother Miriam noted that the Christian principles underlying America’s traditional understanding of marriage haven’t changed.

“There’s no such thing as homosexual ‘marriage,’” she explained. “Marriage is God’s design, not man’s, and it is one man and one woman. End of story.”

Mother Miriam pushed more Republican senators to speak out in favor of biblical marriage and condemn the Respect for Marriage Act. Remaining silent, she said, “is equally evil” as supporting it.

Democratic Sen. Tammy Baldwin, an open lesbian and the lead sponsor of the RFMA in the Senate, announced Thursday that senators will postpone a vote until after the midterms but said she remains “very confident that the bill will pass.”

Bishop Strickland: RFMA is a ‘blatant denial of God’s plan”

Along with Mother Miriam, other faithful Catholic leaders have strongly denounced the Respect for Marriage Act, with Bishop Joseph Strickland warning that the legislation “places us in great peril.”

The irony of the “Respect for Marriage Act” now before Congress is tragic. It is in truth a blatant denial of God’s plan for humanity & places us in great peril. All who love God & seek to live His Commandments must go on record opposing this travesty & denial of God’s Law.

“The ‘Respect for Marriage Act’ would do the opposite of what its name implies, codifying a demand for states and the federal government to honor whatever may be deemed ‘marriage’ by any other state,” the archbishop lamented, noting that three cities in Massachusetts have already granted legal recognition to polyamorous partnerships.

In addition to LifeSite’s petition, LifeSiteNews is running a Voter Voice campaign alerting senators about the dangers posed by the Respect for Marriage Act and about conservative voters’ opposition to the bill.