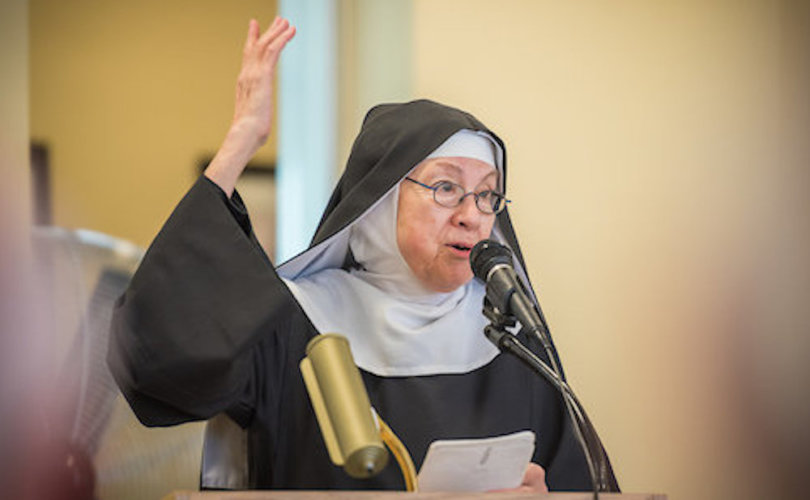 (LifeSiteNews) – With Roe v. Wade on the verge of collapse, Mother Miriam blasted so-called Catholic lawmakers rushing to preserve legalized abortion, warning that they “will spend eternity in hell,” along with any priest or bishop who lets them receive Communion.

In an episode of “Mother Miriam Live!” the Benedictine nun highlighted the leaked Supreme Court draft opinion which, if upheld, would overturn Roe and once again allow states to ban abortion-on-demand. The leak has caused “a firestorm in the Democratic Party,” however, with the left doing everything in its power, including “invading Catholic churches,” to pressure the Supreme Court justices against defending life.

“They’ve got demonstrations outside their homes. Their lives are being threatened,” Mother Miriam said, urging the Church Militant to pray for the justices to “do what is right.”

At the same time, many self-professed “Catholic” politicians are moving quickly to protect legal murder of the unborn and undercut Roe’s possible demise. Mother Miriam cautioned that any such Catholics and any clerics who knowingly give them the Eucharist are putting their souls in mortal danger.

“Anyone who votes for abortion or allows someone to receive the Holy Eucharist who is for abortion is not on his way to heaven,” she said. “There’s no way on earth.”

“You are not Catholic and you are not on your way to heaven,” Mother Miriam emphatically stated, adding that pro-abortion “Catholics” must “deeply repent.”

“This is not my opinion,” she said, but rather “the teaching of Our Lord Jesus Christ, who gave our Church and gave the law.”

The Catholic Church teaches that abortion is always “gravely contrary to the moral law,” according to the Catechism of the Catholic Church, and attaches the canonical penalty of excommunication to any “formal cooperation” in abortion. A 2004 memo issued by then-Cardinal Joseph Ratzinger identified “campaigning and voting for permissive abortion and euthanasia laws” as formal cooperation, requiring denial of Holy Communion.

Despite reaffirming his support for the “right” to “abort a child” and his rejection of Catholic doctrine on life, Joe Biden continues to receive Communion at Jesuit-run Holy Trinity Catholic Church in Washington, D.C., with the explicit approval of Cardinal Wilton Gregory.

Penalty for sodomy is ‘hell forever’

In the same episode, Mother Miriam also doubled down on recent comments warning that all Catholics, from the pope down, cannot back the LGBT movement or same-sex so-called “marriage” without facing damnation.

She cited St. Paul’s blunt condemnation of homosexual acts in his Letter to the Romans, in which he describes homosexuality as “unnatural” and “shameless”:

God gave them up to dishonorable passions. Their women exchanged natural relations for unnatural, and the men likewise gave up natural relations with women and were consumed with passion for one another, men committing shameless acts with men and receiving in their own persons the due penalty for their error.

“And every single lawmaker and bishop and priest who supports LGBTQ, homosexuality, same sex so-called ‘marriage,’ gender ideology, gender change, all of that, you have put yourself on the road to hell, every single one of you, unless you repent,” she added.

“It’s not my opinion. Read the Scriptures.”

Biden a ‘child’ of the devil

Mother Miriam later clarified that if her statements about God’s punishment for people in “such abominable sin” seem harsh, “someone needs to tell them.”

“You need to repent and convert, and so does everyone,” she continued, also naming House Speaker Nancy Pelosi and all priests and bishops who have “bought into this darkness and evil.”

Mother Miriam: ‘The family is the key’ to stop the left’s ‘diabolic’ agenda