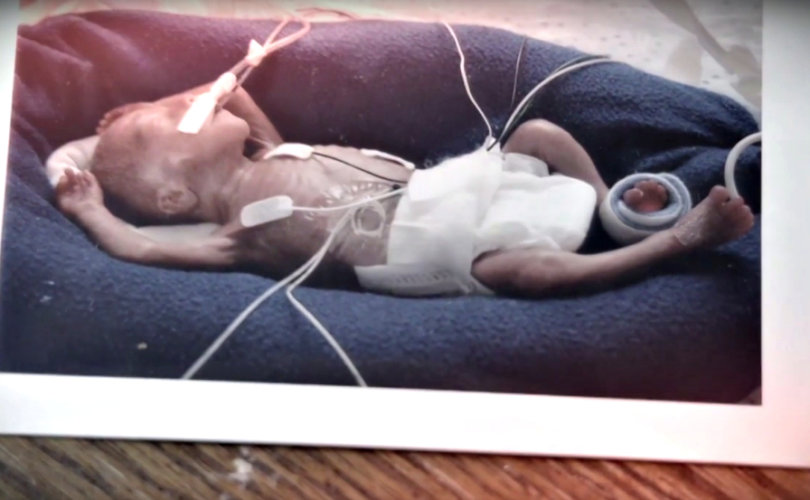 WASHINGTON, D.C., August 3, 2016 (LifeSiteNews) – The mother of a baby born at 22 weeks asks pro-abortion politicians, especially Hillary Clinton, to look at her healthy toddler before consigning other babies to the abortionist’s scalpel in a touching new campaign ad produced by the Susan B. Anthony List.

Danielle Pickering does all the talking, but the star is Micah, who was born extremely premature in 2012.

“Micah today is a wonderful little boy,” she says in the ad. “For somebody to say that a baby at 20 weeks doesn’t have the right to live, I want to tell them to come and see Micah.”

“This is a child’s life at stake,” Mrs. Pickering says. Hillary Clinton “is not cherishing that baby’s life.”

“Hillary Clinton’s position on late-term abortions is just too extreme,” she concludes.

Clinton has vowed to veto the Pain Capable Unborn Child Protection Act, which would bar abortionists from killing any child with the capacity to feel pain. The bill, originally introduced by Rep. Trent Franks of Arizona, sets that milestone at 20 weeks.

Pickering has previously said that her son serves “as a witness to the truth that unborn children – at the very least those born at 20 weeks fetal age – can experience pain and deserve the protection of the law.”

“I could see the pain my son experienced when he was in intensive care at 22 weeks. He was very sick,” she has said. “The doctors at our hospital recognized that he was suffering and kept him medicated so that he would not feel excruciating pain.”

Donald Trump has said he will sign the bill, if it reaches his desk.

Clinton not only refused to support additional restrictions on abortion but has called for taxpayer-funded abortion through all nine months of pregnancy in the United States and around the world and said her campaign “belongs” to Planned Parenthood.

“It comes down to this: Planned Parenthood and their candidates support abortion on-demand up until the moment of birth, at taxpayer’s expense. That is what they are campaigning” on, Mallory Quigley, the communications director of the Susan B. Anthony List, told LifeSiteNews.

Supporting the right to life “is a winning issue so long as it is articulated – and articulated well,” Quigley said.