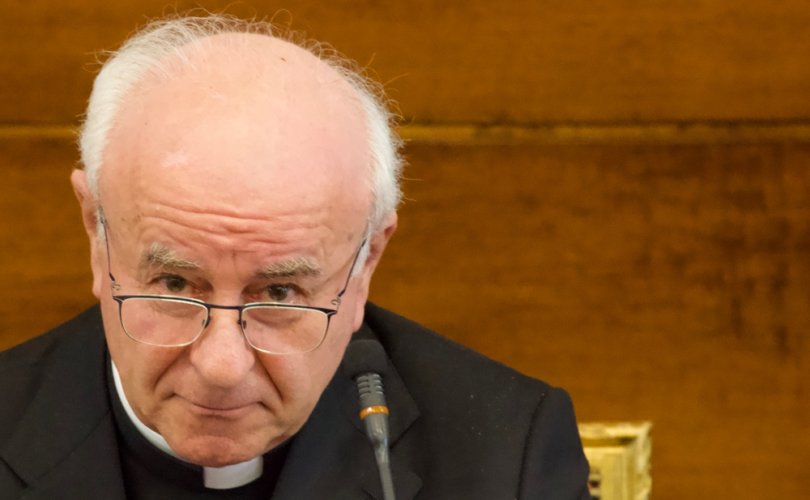 ROME, March 21, 2018 (LifeSiteNews) – The mother of a 9-year-old boy who suffers from a severe disability due to a mitochondrial disease has offered the Vatican’s Academy for Life president a “filial correction” following his recent statements on the Alfie Evans case.

She has also said if Archbishop Vicenzo Paglia’s recent statements about Alfie Evans are true, he “cannot and should not” remain as head of the Pontifical Academy for Life.

Taking a leaf out of the ‘dubia’ cardinals handbook, the Italian mother said she “respectfully” wrote to Archbishop Paglia regarding his recent interview with the Italian agency Tempi, but as she has not received a reply, she has now decided to share her “reflections as a mother.”

As LifeSiteNews reported on March 12, in the March 9 interview with Tempi, Archbishop Paglia seemed to side with a British judge who has ordered 22 month-old Alfie Evans to be denied life support against his parents’ will.

In his decision, Judge Anthony Hayden said that “continued ventilatory support is no longer in Alfie’s best interest,” even though doctors from  the Vatican’s Bambino Gesú Hospital, having reviewed the case, offered to take little Alfie and provide him with full palliative care, including ventilation.

LifeSiteNews had written to Archbishop Paglia’s secretary with several questions prior to publication of our March 12 report but received no response.

By chance, on March 13 this correspondent ran into Archbishop Paglia in Rome’s Fiumicino airport and asked him about his interview on the Alfie Evans case. But the archbishop was silent and walked away, signaling to his secretary to ‘take care of the matter.’

The secretary said he would follow-up by email, but when asked if Archbishop Paglia would comment further on the case, he wrote that the archbishop had nothing more to add.

Although Archbishop Paglia may have nothing more to add, here below we publish in full one mother’s reflections.

I am the mother of Mele, Emanuele Campostrini, a 9-year-old boy suffering from a severe disability due to mitochondrial disease and mitochondrial DNA depletion. Some might know me for the public stand I took in Italy over the Charlie Gard case.

Recently, deeply struck and outraged, I wrote to Archbishop Vincenzo Paglia, president of the Pontifical Academy for Life, after reading his statements on the Alfie Evans case in the interview published on March 9 by [the Italian website] Tempi.

I wrote respectfully but with the intention of offering a filial correction, because I think that every believer wants the Church to be more beautiful and more holy, and that a Christian loves fraternal correction since his goal is to please God and to gain heaven. I have not yet received a reply, and so I thought I would share my reflections, as a mother, which initially were rightly addressed only to Archbishop Paglia.

If what is written in the interview with Tempi is really true, I think that Monsignor Paglia cannot and should not be the head of the Pontifical Academy for Life.

The “drama of parents” who have a sick child is absolutely incomparable to the tragedy of not being able to defend him from a horde of evil people who are attempting to take his life. It is hard to listen to such ignorant and arrogant words. The fact that there is neither a diagnosis nor a therapy for a disease, and that humanly speaking it is “incurable,” does not justify killing anyone. Of course it is “suppression,” and the word is more than proper. Indeed, it is the only one to use, because it respects the truth of what is happening: Alfie is not cerebrally dead.

For Alfie there is no diagnosis or treatment. Therefore, he is not undergoing any special therapy for his unknown pathology, and so there is no “overzealous treatment.” He is not undergoing any active therapy.  No one knows “what” therapy to propose because they don’t know what illness he has. “Overzealous treatment” occurs when the therapy itself causes uncontrollable suffering and is useless. It really was nothing to do with this case. In fact, there are no “disproportionate means” in Alfie’s case because mechanical ventilation and nutrition by nasogastric tube are completely normal for many people who live in hospital or even at home, (including my son!). In fact, the parents are not asking for any special or experimental therapy to be carried out. They simply want to allow their son to live and to die when God calls him.

Is it really possible that Archbishop Paglia does not know the documents he cites? Or does he quote them in bad faith? Is it possible that he is so taken up with burning incense to the powers that be, in order to remain on the chair of his own power and vainglory? And yet I can still remember his catecheses at the time of Pope John Paul II which were of a completely different tenor (click here for the Italian). In those days, Archbishop Paglia wondered whether the scarce number of miraculous cures was due to a lack of faith of Ministers, and he said they should obey God’s command to lay hands and heal the sick…that the care of the sick is the center of Jesus’s ministry.

Now, instead of laying hands on a sick, innocent and defenseless child to implore his healing, alas he justifies their killing with mellifluous accuracy and by distorting the words of the Magisterium and the Pope. You “accept that you cannot prevent death” only once you have given the patient food and drink, and you have helped them to breathe, and they die anyway and you have no choice in the matter. No one can prevent another from dying by force, even if they try everything. One needs to know that it is possible to die even attached to a ventilator, eating and drinking, even ten minutes after the last meal. If I remove these things, I do not “accept that death cannot be prevented.” Rather, I cause it by a failure to provide assistance. Beyond being “euthanasia by omission” — let us speak clearly and be honest — it is killing without consent. Without the parents’ consent. This is what it’s about and nothing else.

The devil relishes all this. He relishes in killing an innocent and sacrificing him on Friday like Christ (and like Charlie Gard). But he also enjoys destroying that beautiful and pure image of God the Father to which the parents of these creatures, knowingly or not, are bearing witness. Alfie’s parents, like the parents of other little ones, are the clearest image of what the love and mercy of God for his creatures means: whatever the cost, to the end, in spite of any illness or defacement by sin, a love so complete, free, male and female, of a mother and father; the unconditional love of God. Each one of us wants to receive this love. We yearn for it for ourselves, we seek it everywhere and we are restless until we find it. These parents demonstrate [this love] so well! These children, these parents reveal the face of God, which the enemy cannot stand and which he seeks to destroy.

The parents … Paglia talks about them, but it is so difficult, having no experience, to really understand the parents’ “drama” and their “emotional involvement.” We as parents, and as Catholic parents, have never suffered any pain because our child is ill, we love God and we trust in Him. Our son is a gift from the Lord, he is a beautiful gift. We have never needed any psychological support. It is a lie from the devil to believe that if parents have a sick child at birth, they are sad. The parents are concerned, and they begin a formidable battle for life!

The only “help” we really needed, apart from prayers, was the help of those who taught us how to keep our son alive: how to feed him with a nasogastric tube (which we do ourselves, even now); how to ventilate him with an Ambu bag to help him breathe, or when he needs the ventilator for longer periods; how to deal with his epileptic fits, how to change him, sit him down, turn him round, teach him, etc …, how to look after him, well, and how to help him grow up with us and his siblings. We needed the help of doctors, technicians, teachers, administrators and staff with the courage to sign the papers that allowed us to have what we needed: a wheelchair, tutors, corsets, aids, staff, resources and whatever was needed, without worrying about the “finances” of their company or what their boss might say if they spent this money.

We have obviously also fought with inept, unworthy, ignorant and occasionally (it is very rare) really wicked people. This is our battle and our cross, certainly not the illness or the life of our child. Alfie’s parents, despite being young, are courageous and strong and they know Christ very well, because they take care of Him everyday.

At times like this everyone has a responsibility, even those who remain silent for fear of the consequences: no one will save his life if he is not willing to lose it for the love of God. But how great is the responsibility of pastors! To have wolves disguised as lambs or as confused pastors, who even insinuate subtly and with almost persuasive words doubts about Catholic doctrine, which is clear and unalterable, is for us parents like feeling betrayed by Judas. With the words of the Lord Jesus once more I say: “Whoever scandalizes even one of these little ones who believe in me, it would be better for him to have a great millstone fastened around his neck and to be drowned in the depth of the sea” (Matthew 18.6).

Editor’s note: The above reflection was translated from Italian by LifeSiteNews’ Diane Montagna. It first appeared on La Nuova Bussola Quotidiana.