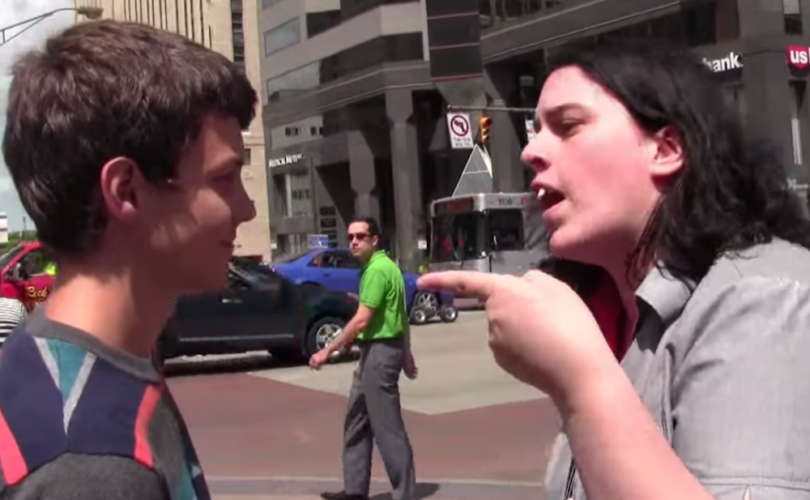 The mother of a Burger King employee caught on video shoving and hitting members of a pro-life activist group and kicking down their signs during an obscenity-laden tirade against “male privilege” says she will file a civil lawsuit against the pro-life group due to the “emotional distress” her family has experienced after the embarrassing clip went viral online.

The video in question shows Victoria Duran, 28, screaming in the face of a teenage boy who was standing beside an image of an abortion victim and passing out literature for pro-life group Created Equal on a street corner in Columbus, Ohio.  Duran was apparently enraged over a poster depicting a 12-week-old unborn child, which she insisted was a “lie.”

“That is not what a fetus looks like,” Duran screams in the video. “It’s a clump of cells at 12 weeks. It does not look like that! It’s a clump of blank cells. You’re a racist f—ing male that doesn’t stand for women’s rights!”  She then violently kicked over the poster, and when she realized she was being filmed, physically assaulted the person holding the camera and started running down the street, kicking over another poster as she fled.

Seth Drayer, the group’s director of training, pursued Duran on foot and informed her they were calling the police.  She stopped running and confronted Drayer face-to face, screaming obscenities at close range until she spotted the police.  At that point, she shoved Drayer aside and boarded a nearby city bus.  The police removed her from the bus and arrested her on charges of assault and criminal damaging of property.

Duran’s mother, Anairis Carter, who lives in Florida, fought the charges, claiming her daughter is autistic and therefore can’t be blamed for her actions.  The county prosecutor dropped the criminal charges, but ordered Duran to pay $80 to Created Equal to cover the cost of the posters she destroyed.

Now, Carter is suing Created Equal for emotional distress.  She says that ever since the group posted video of her daughter’s violent outburst, her family has received threats and harassment, driving her to purchase a security system for their house.

“On top of emotional distress all the excess things that have to do that have come out of pocket for me to be able to protect my children because of what they've done,” Carter complained to ABC6. “It irritates me that [the pro-life activists] are trying to make themselves be victims when they are hardly that if you're a victim you don't sensationalize it.”

On Created Equal’s Facebook page, Carter continued to defend her daughter and vowed to keep up the fight against the pro-life group.

“[Victoria] had an outburst … autistic people have them,” Carter wrote. “She didnt [sic] deserve everything else that happened afterwards and THAT'S why I AM SUEING [sic] them. They have HURT my children and their lives and their way of life … So, no, I wont leave them alone. The courts will decide on what happens. It will be in their hands.”

In another Facebook post, Carter compared Created Equal to abortion clinic bombers and expressed her support for abortion-on-demand.

“I am so disgusted by these people,” Carter wrote. “I actually went on their website and I saw the MOST horrendous of things [sic]. These people are using an intro of MLK's ‘I have a dream speech’ [sic] to compare themselves and what they do to to [sic] the civil rights and civil liberties movement. They are comapring [sic] what they do to something so important as this?”

“Trying to overturn Roe v Wade is the most horric [sic] thing there is,” declared Carter. “Trying to send women back to the 30's, 40's, and 50's where llegal [sic] abortions with wire hangers and dying on kitchen tables must be more acceptable to them than the alternative.”

Carter has repeatedly accused Created Equal of lying about her daughter shoving Drayer into the side of a city bus.  In response, the group recently posted a second video that clearly shows the assault, along with a bystander threatening to mace Duran if she continued her violent behavior.