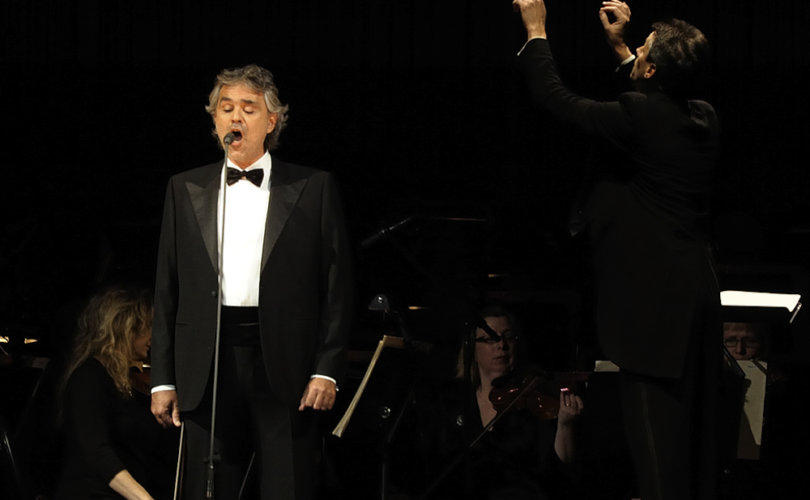 ITALY, January 23, 2018 (LifeSiteNews) — Once upon a time, a frightened young bride was told that she was pregnant with a blind child and that she should abort him. She refused, and the boy grew up to become a musical superstar.

It may sound like a fairytale, but it’s true. During an episode of Italy’s Sunday talk show “Domenica in” last week, Edi Alighieri, mother of Andrea Bocelli, described the dramatic circumstances under which she found out she was pregnant.

As Bocelli himself revealed in 2009, when Alighieri was a young newlywed, she went to the hospital with terrible stomach pains, thinking she might have appendicitis. There she was told that she was pregnant, but the baby she was carrying was already seriously disabled. He had congenital glaucoma that would render him blind, doctors told her, from birth.

“They told me to abort; I refused,” she was reported as saying on the program.

During the show, Alighieri revealed that it was Bocelli’s blindness that led him to music in the first place. When he was staying in a hospital in Torino, undergoing treatment for glaucoma, Bocelli met a Russian man who listened to symphonies all day.

It was love at first listen. “He no longer remembered being in care, he was fascinated by music,” his mother recalled.

Bocelli, who was born in 1958, became completely blind at 12 after an accident playing soccer. Today, he is one of the world’s most famous classical singers. He has recorded 15 solo albums of both popular and classical music, and topped the charts with his duet with Sarah Brightman, “Time to Say Goodbye.” Released in 1995, the song sold more than 12 million copies, becoming one of the best-selling recordings in history.

Bocelli himself is a firm advocate of unborn children’s right to life.

Other singing stars whose mothers resisted pressure to abort include Scotland’s Susan Boyle and Canada’s Justin Bieber. Bieber’s mother, Pattie Mallette, wrote an autobiography that was 17th on the New York Times Bestseller list the week it was released. She also served as the executive producer of the pro-life film Crescendo.