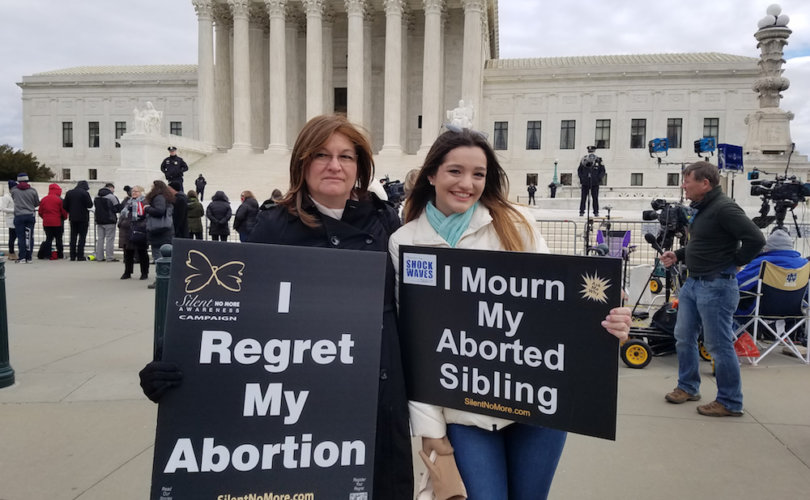 Andrea Pearson (left) and daughter Madeline of Leesburg, VA, stand in front of the Supreme Court awaiting the procession from the 2017 March for Life. Andrea had three abortions beginning as a teenager. Peter LaBarbera / LifeSiteNews

WASHINGTON, D.C., January 30, 2017 (LifeSiteNews) — Some of the most compelling stories at the March for Life came from women who regret having an abortion or abortions but now use their personal tragedy to educate others, especially young women.

One such woman is Andrea Pearson, who stood with her 17-year-old daughter, Madeline, in front of the Supreme Court on Friday, awaiting the procession of the massive March for Life, marking the 44th anniversary of Roe v. Wade.

Andrea, who lives in Leesburg, Virginia, told LifeSiteNews how she became pregnant at 18 and went to the local Planned Parenthood “to get advice.” She left with an appointment for an abortion scheduled for just a few days later. She did not tell her parents.

Pearson said the abortion procedure “was never explained” to her and that she “never met the person about to do the procedure.”

On the day of the abortion, “He just came in and started the procedure,” apparently an aspiration suction abortion.

“So I had my abortion,” she said, and within a few days got very sick with a high fever.

Her mom rushed her to the hospital, where she was given antibiotics for an infection resulting from the abortion. This is how Andrea’s mother found out about it. Pearson, tearing up, said her mom was “crushed — you know, she lost a grandchild.”

“Within weeks, that abortion would haunt me,” she said. “The sounds of the suction [from the abortion], the coldness of that room, and it was constant.”

Like so many other post-abortive women, Pearson dealt with haunting guilt and pain through drugs and alcohol. “They became my friends,” she said, to “help me ease the pain of what I was experiencing after my abortion.”

She developed a “promiscuous lifestyle” that lasted for years. “And during this horrific cycle of sex, drugs and alcohol, I had two more abortions.”

It got so bad that thoughts of suicide started to enter her mind, scaring her. But, thanking God for her parents implanting a “seed of faith” in her as a young child, Pearson told how out of desperation she walked into a church “and sat in front of a tabernacle, and I prayed and I cried.”

But she still did not sense divine forgiveness, she said, “because I still felt, ‘How could God forgive me?’ Look at what I’d done, and look at the life I’m living … but I still was asking for His help.”

Then a priest entered the church and Pearson said, “It took all the courage I had to go over and talk to him.” She said they talked for a long time and “he gave me the hope of rebuilding my life.”

From there, she went through years of counseling until finally attending a Rachel’s Vineyard weekend retreat, “and that is where I discovered true love and forgiveness.” A ministry of Priests for Life, Rachel’s Vineyard helps post-abortive women and their loved ones through intense counseling and prayer to deal with “buried feelings [that] can surface later and may be symptoms of post-abortion trauma.”

After the retreat, Andrea said, “I was finally able to move forward in my life … and grieve my [aborted] children. I was never able to grieve them.”

Pearson said one of the hardest things she had to do was to tell Madeline about the abortions, which she did after praying to God for the proper time.

“I did it because I wanted to be a voice,” she said, “and I received love and forgiveness from my daughter.”

Madeline remembers the conversation: “I wasn’t mad, I wasn’t hurt by it. I just felt bad for her, and how she had to go through that.”

Asked what she would say to a teenage girl considering abortion today, Andrea said, “They make it sound like it’s an answer to a problem. First of all, a baby is not a problem. But [abortion] is not a quick and easy solution. It’s not. So it affects your life the rest of your life.”

She said she comes every year to the March for Life and “each time it’s healing for me. And I want people to know how bad abortion is.”

Madeline, too, comes every year, and she is extraordinarily committed to the pro-life cause, having launched a pro-life club at her high school as a freshman. She said she loves coming to the march because “It’s so much fun, just speaking with people who also support the cause.”

Madeline said she has told only her close friends about her mother’s past but now is stepping out to help other women who might, like her mom, see aborting a child as their only choice.