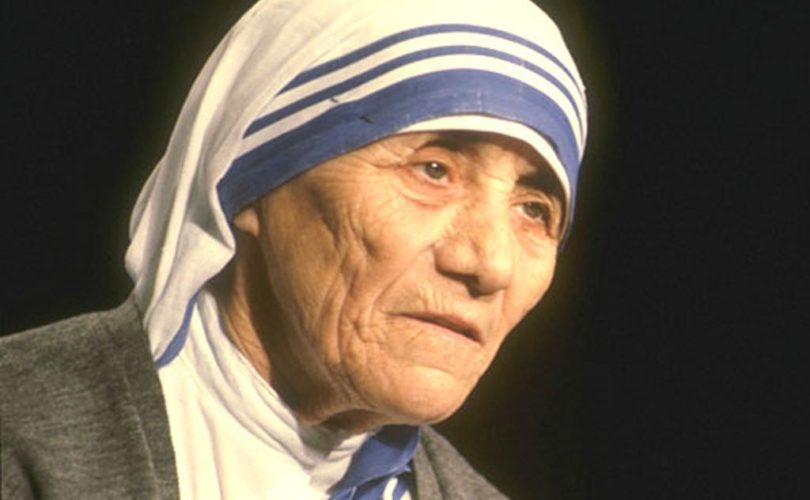 ROME, May 22, 2015 (LifeSiteNews.com) — The canonization of the foundress of the Missionaries of Charity, Nobel Prize winner, and pro-life heroine Blessed Mother Teresa of Calcutta may take place in 2016, though conflicting reports from Rome haven't clarified when the hoped-for event will happen.

Reports in Italian media say that Archbishop Rino Fisichella, president of the Pontifical Council for the New Evangelization, advised Rome’s municipal authorities that September 4, 2016 would be a possibility, as it is the day marking the Voluntary Work Jubilee, celebrating those who volunteer in works of mercy.

This date, according to Catholic News Service, was suggested by the Vatican’s prefect of the Congregation of the Causes for Saints, Cardinal Angelo Amato, at a May 18 meeting between Vatican officials and Pope Francis.

However, Vatican spokesman Father Federico Lombardi issued a statement saying that while Blessed Mother Teresa could be canonized during next year's Holy Year of Mercy, no date had been finalized.

“It is a working hypothesis, therefore there is no official confirmation to be given,” Lombardi said. “The cause for Mother Teresa is still underway and it is therefore premature to speak of an already established date for the canonization.”

Mother Teresa's work helping the “poorest of the poor” in the slums of Calcutta and spreading around the world through the Missionaries of Charity, which she founded in 1950, was recognized with a Nobel Peace Prize in 1979.

Her statements condemning abortion and in support of the poor, helpless, and voiceless are part of the lexicon of all pro-life work around the world.

Mother Teresa said: “Any country that accepts abortion is not teaching its people to love, but to use any violence to get what they want.”

In her Nobel Prize acceptance speech, she stated, “I feel the greatest destroyer of peace today is abortion, because it is a direct war against the child, a direct killing of the innocent child – direct murder by the mother herself. … Because if a mother can kill her own child – what is left for me to kill you and you kill me – there is nothing between.”

In 1985, she reiterated and expanded on this point in an interview with New York journalist and pro-life activist Thom O’Connor that, until a few years ago, had been almost unknown.

In the O’Connor interview, which is now publicly available after being uploaded onto YouTube, Mother Teresa explained that the unborn child is created “in the image of God for greater things, to love and be loved. That is why it is such a terrible thing to think that the mother, to whom the child has been given as a gift of God, could destroy it.”

The famed humanitarian called it “something unbelievable” that the “mother can murder her own child.”

In the interview Mother Teresa spoke briefly of her work among the “poorest of the poor” in India and elsewhere, and noted that abortion is less common among those with less material wealth.

“Something very strange is that the poor people are not destroying their children, the unborn child,” she said. “It is the better-off people who want something else and are afraid of the little one. So they destroy the child.”

“But the very poor people are not doing that. We have seen it again and again in every place where our sisters are working.”

O’Connor spoke about his experience of interviewing the frail-looking woman that many believed at the time was a living saint. “Her personality and warm presence are so powerful, so commanding, that her gentle humility quietly radiates throughout her entire being,” he said.