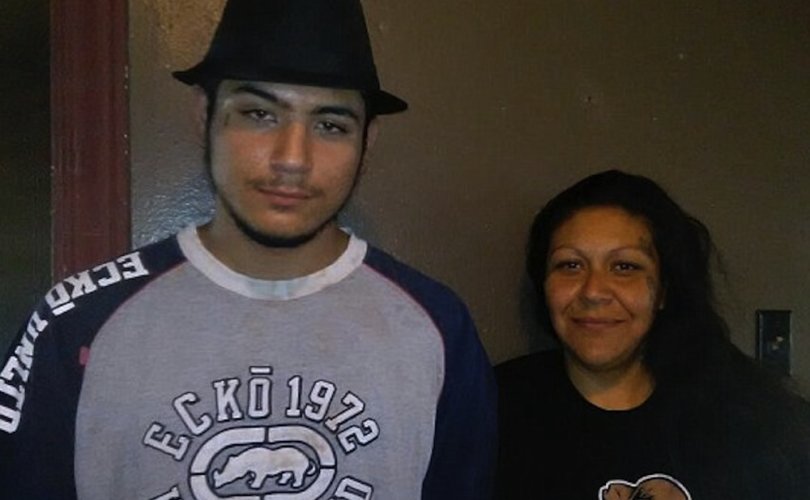 August 17, 2016 (LifeSiteNews) — A woman and her son living in New Mexico are fighting in the courts for what they call a “right” to have a sexual relationship.

Thirty-six-year-old Monica Mares and her son, Caleb Peterson, 19, of Clovis, New Mexico, were separated after Peterson was born when she gave him up for adoption, but say they “fell in love” after they were reunited earlier this year and Peterson moved in with his mother.

They claim they have an orientation called “Genetic Sexual Attraction” (GSA) and want to “raise awareness about it.”

His mother says she’s so committed to their “love” that she’s willing to go to prison to defend it. She even claims she would give up custody of her other eight children to continue her relationship with Peterson.

The two were arrested by police in February after angry neighbors reported their illegal relationship. They were released under a court order to abstain from contact but then arrested again in March after being caught together.

They have been charged with incest, which is a third-degree felony in New Mexico that can be penalized with up to three years in prison and a $5,000 fine. Their case is scheduled for trial in September.

An incest advocate who goes by the name of “Cristina Shy” is raising money for the legal defense of the couple. She says attraction to incest is a sexual “orientation” similar to others such as homosexuality, and that “full marriage equality” will not be achieved until parents and children as well as other close family members can “marry” one another.

“It was the same with gay people just a few years ago,” she told the Mail.

“Gay people were also once accused of being mentally ill … and now that has been disproved,” Shy wrote on her blog.

“As we all know, as recently ago in history as the 1950s, homosexuality was illegal, people found to be having gay sex were arrested, put on trial, convicted and imprisoned. Society told gay people that they were perverts, sick, mentally ill, disgusting, and sinners against God. Wait a moment, this tirade of pure nonsense sounds awfully familiar doesn’t it. … OH OF COURSE, these are the very same things that consanguinamorous people have to deal with RIGHT NOW,” Shy wrote.

“Consanguinamory,” is Shy’s term for incestuous relationships, which she says should be legalized and recognized as “marriage.”

“Relationship and marriage equality have come a long way,” Shy wrote. “However, we still have a very long way to go to achieve FULL marriage equality for ALL consenting adults. With public awareness, more people reaching out, and people willing to take action, we can achieve more and more to reach our goals and change the oppressive laws that are currently in place.”

“I threw up in my mouth,” a reader wrote in the comments section. “IDC when they met, she carried him in her womb!!! Knowing they were mother and son and still going that route is disgusting.”

“It’s my fault for reading this while I was eating lunch,” another wrote.