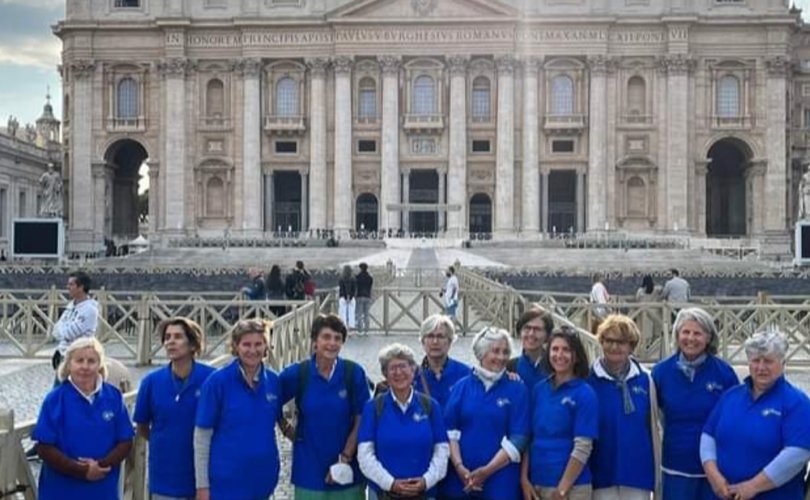 The mothers, members of the group “La Voie Romaine” (“The Roman Way”), had made a pilgrimage by foot from Paris to ask the Pontiff to lift the restrictions imposed on the celebration of the Traditional Latin Mass.

The papal audience in St. Peter’s Square today was the culmination of the eight-week walking pilgrimage of over 880 miles undertaken by the mothers of priests who used to offer Mass according to the Church’s ancient usage. The traditional Latin Mass, which is also known as the Tridentine rite, has been greatly restrict0ed by Pope Francis’ motu proprio Traditionis Custodes.

The Holy Father acknowledged the mothers at the audience, saying, “I cordially greet the French-speaking pilgrims, especially the association ‘La Voie Romaine’… who have come from France.”

The women brought letters addressed to the Pope from “all the faithful attached to the celebration of the Tridentine rite… as a testimony of their faith and their commitment to the mission of the Church.”

One of the mothers, Elisabeth Denis, who walked the entire journey from Paris, told LifeSiteNews that she made the pilgrimage on behalf of her son who has been a priest in the Institute of Christ the King for ten years. Her husband made the journey with her.

The mothers said they wished “to lay at the feet of the Holy Father the supplication of all the faithful who live the faith of the Tridentine rite and in the full communion of the Church.” They affirmed they have been, and continue to be, “strengthened by our love for this liturgy that still leads so many souls to turn to the Lord.”

Five mothers made the long journey in its entirety, beginning on March 6. Each week they were joined by about ten other women, also mothers of priests, for that week’s stretch of the pilgrimage. The pilgrimage included stops along the way at churches and monasteries that still offer the Traditional Latin Mass in France. The mothers arrived in Rome April 30, and today asked the Pope to lift his restrictions on the celebration of the Mass and sacraments according to the Missal of 1962.