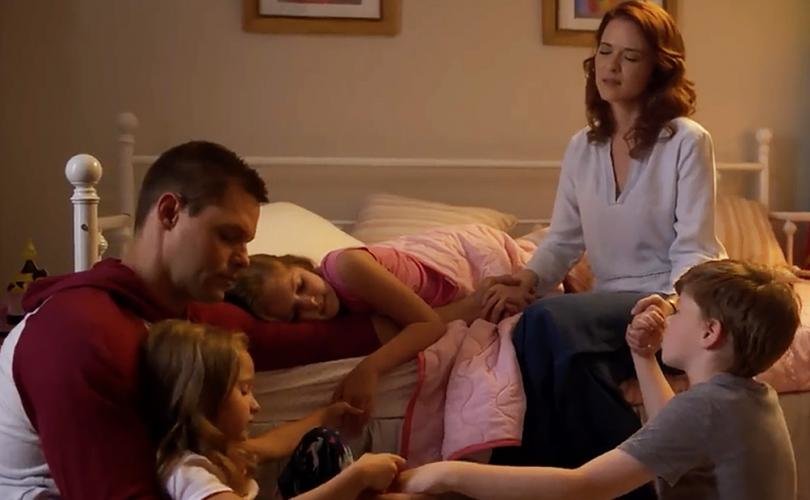 MEMPHIS, Tennessee, May 11, 2018 (LifeSiteNews) – The producers of some of the most popular recent faith-based films have just released the first trailer for a movie about an aspect of the War on Terror often overlooked: the role of chaplains helping troops keep their faith on the battlefield.

“Indivisible,” is based on the real-life story of Darren Turner, a U.S. Army Chaplain whose marriage was put to the test during the Iraq War.

The trailer depicts a mix of gritty military action and human drama on the home front, as a tour of duty separates Turner from his wife Heather (played here by “Grey’s Anatomy” actors Justin Bruening and Sarah Drew) for fifteen months. The film depicts both the responsibilities of a military chaplain, such as counseling soldiers and performing baptisms and funerals, and the toll his absence takes on his wife and children.

“Indivisible’s true story shows there is no marriage too broken for God,” director David Evans said in a press release. “We hope husbands and wives who see the Turners’ story on film will stop fighting one another and join forces to fight for their marriages together instead.”

“The heart of Indivisible is about marriage,” added Drew, who is also one of the film’s executive producers. “The military is the setting through which we tell a story about what it means to fight hard for the vows you make on that day you stand before God and before your community and say, ‘I will love you for better or worse.’”

Author Moni Basu also told Turner’s story in the 2012 book “Chaplain Turner’s War.” That year, the real-life Turner told her how the war’s horrors, the strain of the separation, and the perceived lack of concern for American troops among the general public grew into anger that he eventually began taking out on his family when he returned home.

“I came home angry,” Turner explained. “Even my attitude, which I thought I was in control of, was walling me in. I didn't realize it until my wife told me, 'You're no longer welcome in our house.'”

“I was very selfish and tried to control my surroundings, which crushed those closest to me,” he admitted.

The unrest manifested in intense fights over minor issues like dishes, leading the two to separate after a few months.

We were not fighting together for our relationship. I wasn’t really fighting for our marriage. I was fighting against him, for our marriage. And he was just running away,” Heather recalls. “I knew something deeper, something supernatural, that we could not manufacture, had to happen, or else this was going to go nowhere.”

The turning point came one day four months after they separated, when Darren dropping off the kids with Heather simultaneously drove home the situation’s gravity in both of their hearts.

“We both were broken at the same time,” he explained. “This was divine inspiration in our lives, and thank God that He interrupted our selfishness.” She agreed that the moment “was as if a fog was lifted,” and they committed to rebuilding their marriage.

After a stint in a sales position, Turner became what he calls “a renewed man both in marriage and profession,” and resumed his job as a chaplain, while Heather volunteers with military families.

Ultimately, he says, Jesus Christ remains his biggest source of strength. “He's been there on the other side, and came back to tell us,” Turner explained. “That's the biggest event in human history, something that maintains hope, even in battle. When soldiers get that, it changes everything.”

The film is produced by Reserve Entertainment, Provident Films, The WTA Group, Graceworks Pictures, and Calvary Pictures, which are responsible for faith-themed movies such as “Fireproof,” “Unstoppable,” and “The Grace Card.” It also features the acting talents of Jason George (Grey’s Anatomy), Tia Mowry (Sister, Sister), Michael O’Neill (NCIS), Eric Close (Without A Trace), and more.

“Invisible” is slated to hit theaters October 26. More details can be found at the film’s official website.