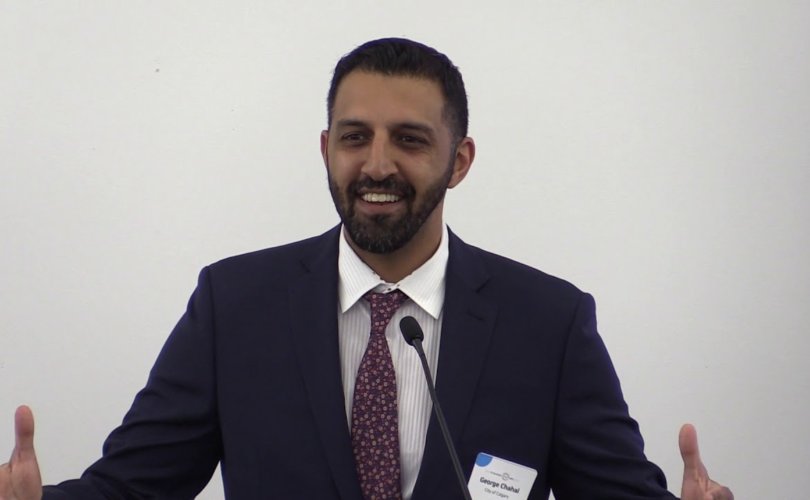 (LifeSiteNews) — Newly elected Liberal Calgary-Skyview MP George Chahal is facing an investigation by Elections Canada after he swapped out his main competitor’s flyers with one of his own while on the campaign trail.

According to a Western Standard report, Chahal’s case is now before the Office of the Commissioner of Canada Elections (CCE).

Kyle Shewchuk, a lawyer for Conservative Party of Canada (CPC) candidate Jag Sahota whose flyers were swapped out by Chahal, said they will file a Court of Queen’s Bench application to ask that results from Calgary-Skyview be invalidated.

Last week, Facebook user Glenn Pennett posted a doorbell camera video that appears to show Chahal removing the incumbent Sahota’s flyer and then leave his own on the step.

According to Pennett, however, the flyer swapped in by Chahal gave the wrong information on where to vote and directed him to a polling station over 16 kilometers from where he was required to vote.

A CBC report shows both flyers in question. Pennett provided the CBC with Chahal’s flyer, and Shewchuk provided them with Sahota’s flyer.

Pennett confirmed that Sahota’s flyer was the one taken from his house, which according to Shewchuk had the correct polling information, according to the CBC.

Shewchuk said concerning the flyer swapping incident that it is “reaching that this could have been a mistake” as the two polling stations were “nowhere near each other.”

“It raises the question if this activity was widespread and if it could have affected the outcome of the election,” Shewchuk noted, according to the Western Standard.

The CCE said that due to “confidentiality provisions of the (Elections) Act,” it could not confirm that it was investigating the flyer-swapping incident.

However, the CCE did say the “confidentiality provisions do not extend to individuals outside of our office, including complainants or those who may be the subject of a complaint.”

According to a Sun-News report, Chahal campaign manager Randall Zalazar admitted that it was Chahal in the video, but that he took the flyer because it had “incorrect polling information.”

Sahota, who was the incumbent for Calgary-Skyview, said she ran a “very clean” campaign and she expected the “same” from all other candidates, according to a Sun News report.

“This video shows the Liberal party candidate didn’t comply with that,” Sahota said.

Chahal beat out Sahota by fewer than 3,000 votes in the hotly contested riding.

Sahota has a “red light” rating from Campaign Life Coalition’s voter guide. She was listed as a “not” supportable candidate for voting earlier this year against pro-life Bill C-233, which would have outlawed sex-selective abortion but was defeated.