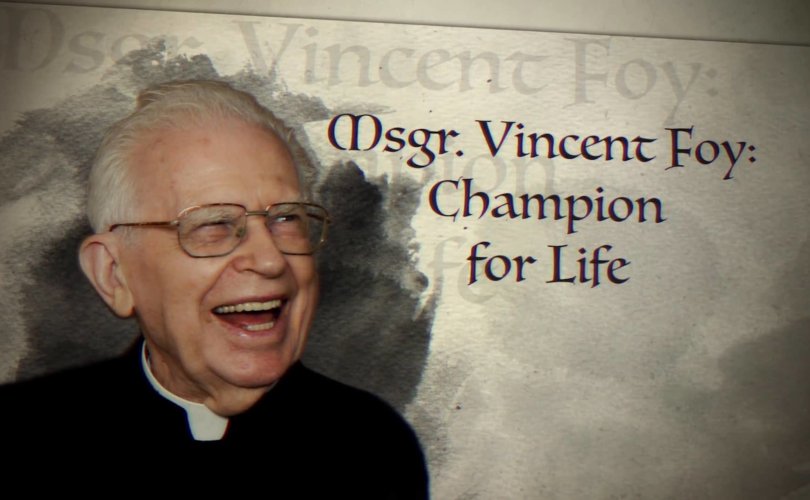 TORONTO, March 14, 2017 (LifeSiteNews) — Canadian Catholics are mourning the loss of one of the local Church’s most ardent defenders of life. Monsignor Vincent Foy, who died March 13 from natural causes at age 101, is remembered especially for his decades-long battle to promote the Church’s authentic teaching on procreation.

A canon lawyer and priest of the Archdiocese of Toronto for 78 years, Msgr. Foy was “an inveterate defender of the sacredness of all human life, especially that of unborn babies,” said Basilian Father Alphonse de Valk, former editor of The Interim and founding editor of Catholic Insight Magazine.

“His greatest and most courageous contribution to Canada’s pro-life cause came when he decided that he could no longer be silent about the betrayal by a large majority of Canada’s bishops” of the Church’s teaching on contraception, Fr. de Valk told LifeSiteNews.

That betrayal came in the form of the Canadian Conference of Catholic Bishops’ 1968 Winnipeg Statement, released two months after Pope Paul VI published Humanae Vitae in July 1968, which reaffirmed Catholic teaching that contraception is intrinsically evil.

The “bishops fell into the trap of moral relativism,” Msgr. Foy wrote in Tragedy at Winnipeg, his major critique of the document first published in Challenge Magazine in 1988.

It gives a play-by-play account of the lead-up to and fallout from the Statement’s publication on September 27, 1968, which Foy described as “the saddest day in the history of the Catholic Church in Canada.”

The Statement’s Paragraph 26 tells Catholics if they sincerely try but cannot follow Church teaching in this matter, “whoever chooses that course which seems right to him does so in good conscience.”

Msgr. Foy was unflagging in his opposition to the Winnipeg Statement, even though “he often seemed like a lone voice” speaking out against it, “with many Canadian Catholics welcoming the document,” noted a 2014 LifeSiteNews article.

“Despite advice that he was wasting his time, reprint after reprint appeared, article after article continued to savage contraception,” de Valk told LifeSiteNews.

‘A hero in every sense of the word’

“Monsignor Foy was a hero in every sense of the word,” noted John-Henry Westen, co-founder and editor-in-chief of LifeSiteNews.

“He battled on the most difficult field, against his own confreres in the hierarchy who refused to remain true to the teaching of the Church on the intrinsic evil of contraception.”

“Through his writings and clarity he likely saved countless souls,” added Westen.

“He was solid as a rock,” echoed Jim Hughes, president of Campaign Life Coalition, who knew Msgr. Foy for 50 years.

Msgr. Foy will be remembered for “his constant faithful leadership over the years,” said Hughes. “He was a great supporter, he was a great son of the Church.”

“The archdiocese of Toronto mourns the death of Msgr. Vincent Foy, the longest-serving priest in the history of our archdiocese,” said Toronto’s Cardinal Thomas Collins in a March 14 tweet.

“As a prayerful shepherd, champion of life issues and witness to the loving service to others, may his legacy live on for years to come,” wrote the cardinal. “We give thanks to God for the incredible journey of Msgr. Foy.”

We mourn the death of Msgr. Vincent Foy, the longest serving priest in the history of our archdiocese https://t.co/BiilGdNDb8 #catholicTO pic.twitter.com/VjU2zcPPDq

‘Saying Mass is my greatest joy’

As a young boy, he promised God that he would try and become a priest if God healed his mother of double pneumonia, according to a 2015 article by Marlena  Loughheed on the archdiocesan website.

His mother recovered and Vincent kept his word, going on to be ordained a Catholic priest on June 3, 1939 at age 24.

He earned a doctorate in canon law from Laval University, and in 1942, was appointed Vice-Chancellor of the Archdiocese of Toronto and Secretary of the Toronto Archdiocesan Matrimonial Tribunal, according to a biography on his website.

In 1947, he was named the Secretary of the new Toronto Regional Tribunal, which he served later as Defender of the Bond and Judge.

Those included St. John’s in Toronto’s Beaches neighbourhood, where he was born, as well as Holy Martyrs of Japan in Bradford, then of St. Patrick’s in Phelpston.

Msgr. Foy was part-time director of catechetics for the archdiocese for many years, and in 1957 when he was 42 years old, Pope Pius XII named him Prelate of Honour and gave him the title of monsignor.

Msgr. Foy was also a founder and honorary member of the Canadian Canon Law Society, involved in the Fellowship of Catholic Scholars, lived in Rome for a year in an advocacy capacity, and was chaplain of the Legion of Mary.

He recalled his love for the Rosary at his 75th ordination anniversary, according to the Catholic Register.

He retired in 1979, giving him time to go full tilt on exposing the Winnipeg Statement and on his pro-life evangelization.

For these efforts he earned “a papal commendation,” according to his website. In 2014, American Catholic network EWTN named him Pro-Life Man of the Year, and commissioned a documentary on his life, produced by Dunn Media with the help of Niagara Region Right to Life.

He lived his last seven years at the Catholic Cardinal Ambrozic Houses of Providence.

The only priest in the history of the Toronto archdiocese to reach 75 years of ordination, he marked that milestone in June 2014 with Mass celebrated by Cardinal Collins.

Above all else, observed CLC’s Hughes, Msgr. Foy was a faithful priest.

“He deserves whatever accolades come his way,” Hughes told LifeSiteNews. “But he would deflect them all because he was only doing what he was ordained to do.”

Or, as Msgr. Foy put it himself to Marlena Lougheed: “Saying Mass is my greatest joy.”