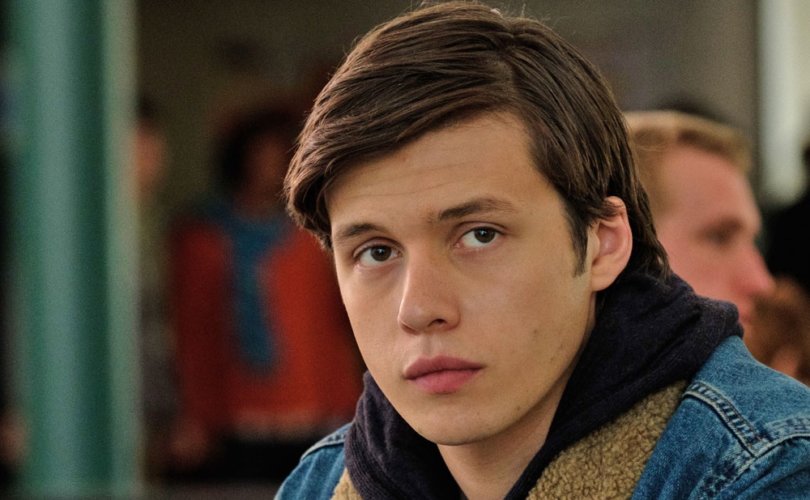 The award, presented by the cast of the Netflix suicide drama “13 Reasons Why,” went to actors Nick Robinson and Keiynan Lonsdale for the climax of the 2018 film “Love, Simon,” about a teenager who comes out to his friends and family, the Washington Blade reports.

The event also hailed another LGBT work, giving writer Lena Waithe a Trailblazer Award for writing an episode of the Netflix series “Master of None” in which a character comes out to her family, as well. In addition, singer Lady Gaga declared “Happy Pride Month” while accepting an award for Best Music Documentary.

“Lots of mainstream critics are hailing the way it normalizes teen homosexuality,” Paul Asay and Adam Holz wrote in their “Love, Simon” review at Focus on the Family’s Plugged In website. “And even though I might appreciate, on some levels, the film’s authenticity, that very quality also makes the movie’s quiet advocacy for homosexuality that much more problematic for families trying to raise their kids by truths rooted in Scripture.”

Asay and Holz further noted that film’s parents take a casual view of teenage heterosexual activity, as well, and that overall the film reinforces the importance of “self-love” over finding happiness on God’s terms.

“The idea is to twist adolescents, who are already susceptible to flattery and sycophancy, into false consciousness,” National Review’s Armond White added in his review. “The disrupter, Michael (a weaselly Logan Miller in the film’s best performance), uses ‘Donald J. Trump’ as his phone ID; an already out, femme black male, Ethan (Clark Moore), styles himself after Oprah and instructs Simon, ‘You think it’s easy?’; and a smiley black friend, Bram (Keiynan Lonsdale), wears a lei to a Halloween party and announces his guise as ‘post-presidency Barack Obama.’”

Fourteen major studio films featuring LGBT themes were released in 2017, according to a recent GLAAD report attacking Hollywood for decreasing its LGBT output from previous years, possibly a result of audience’s decreasing tolerance for “social justice” lecturing in movies.

This year, the Christian film “I Can Only Imagine” earned almost twice “Love, Simon’s” $41 million box office, despite a smaller budget and opening in far fewer theaters.

Despite Hollywood’s overwhelmingly secular nature, the awards ceremony did feature one overtly Christian message. While accepting a Generation Award, actor Chris Pratt used his speech to deliver “9 Rules for Life,” including multiple appeals to faith.

“You have a soul, be careful with it,” said Pratt, the star of the “Guardians of the Galaxy” and “Jurassic World” franchises. “Learn to pray. It’s easy. And it’s so good for your soul.”

“People are going to tell you you’re perfect just the way you are. You’re not. You’re imperfect, you always will be,” Pratt continued. “But there’s a powerful force that designed you that way, and if you’re willing to accept that, you will have grace, and grace is a gift. And like the freedom that we enjoy in this country, that grace was paid for with somebody else’s blood. Do not forget it. Don’t take it for granted.”