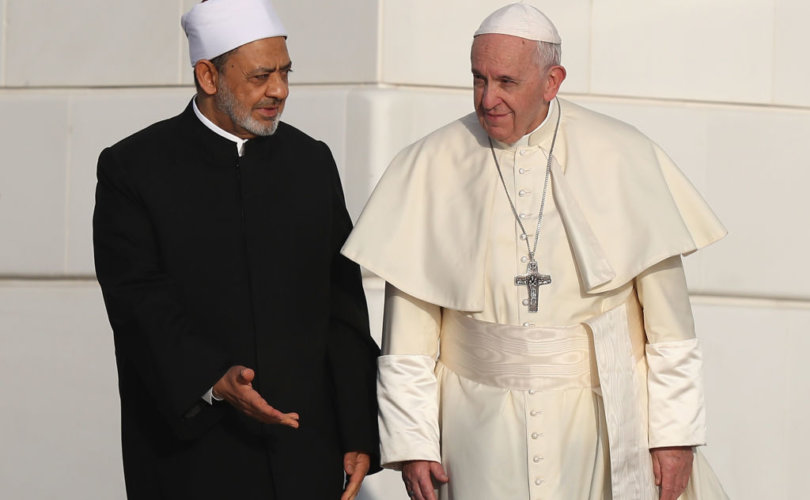 August 22, 2019 (LifeSiteNews) – A multi-faith “higher committee” was announced this week to implement the “Human Fraternity” document signed by Pope Francis and a Grand Imam in February that stated, among other things, that a “pluralism and diversity” of religions is “willed by God.”

Prominent members of the committee that has been set up in Abu Dhabi include Pope Francis’ personal secretary Monsignor Yoannis Lahzi Gaid, Bishop Miguel Ángel Ayuso Guixot, President of the Pontifical Council for Interreligious Dialogue, and Judge Mohamed Mahmoud Abdel Salam, Advisor to the Grand Imam.

News of the committee’s formation was announced by Emirates News Agency, the state news agency, on Monday and confirmed by Vatican News, the Holy See’s news website, the following day.

The Committee has been tasked with “developing a framework to ensure the objectives of the global Declaration of Human Fraternity” for World Peace and Living Together are realized.” These objectives include the promotion of the “ideals of tolerance and cooperation,” according to Vatican News. It remains unclear at this point who formed the committee and gave the committee its mission.

Grand Imam of Al Azhar Al Sharif said the formation of the higher committee comes at a time when all peace lovers are required to unite and join the efforts to spread coexistence, brotherhood, and tolerance throughout the world, reported Emirates News Agency in an August 22 report.

Critics say this amounts to putting the Catholic faith and its worship of the God of revelation on a same plane with religions that do not worship the true God and deliberate reject Him. It also contradicts the teaching according to which there is no salvation outside of the Catholic Church.

In a direct exchange between Pope Francis and Bishop Athanasius Schneider that took place in March 2019, Pope Francis said that the phrase in question on the diversity of religions meant “the permissive will of God,” giving explicit permission to Bishop Schneider to quote his words.

“I mentioned this point to the Holy Father, and he acknowledged that, with this direct comparison, the sentence can be understood erroneously. I stressed in my response to him that the diversity of sexes is not the permissive will of God but is positively willed by God. And the Holy Father acknowledged this and agreed with me that the diversity of the sexes is not a matter of God’s permissive will.

This private acknowledgment on the part of Pope Francis was not followed by any public clarification or rectification of the Abu Dhabi Declaration, which as it stands, still contains this troubling assertion that some critics say amounts to material heresy.

Despite this, in mid-March 2019, only a few weeks after Pope Francis’ private conversation with Bishop Schneider, the Pontifical Council for Interreligious Dialogue sent out a letter dated February 21, 2019, to Catholic university professors in Rome, asking them to give the Declaration the “widest possible dissemination.”

The letter’s signatory, Bishop Miguel Ayuso Guixot, secretary of the Pontifical Council, asked professors as well as priests and religious active in universities “to facilitate the distribution, the study, and the reception” of the Document.

The creation of a “higher committee” constitutes a further step in the promotion of a gravely problematic document, this time under the form of a joint initiative involving high-ranking members of the Catholic hierarchy and Muslim dignitaries of the prestigious Sunnite university of Al-Azhar in Cairo and others who share its (at least apparent) drive to implement a restructured, relativist type of Islam that also purports to accept a “diversity of religions” as compatible with the will of Allah.

Bishop Miguel Ayuso Guixot, who is now president of the Pontifical Council for Interreligious Relations, is the higher committee’s most high-ranking Catholic member.

He has a long record of cordial relations with Muslim dignitaries. In January of 2016 – he had not yet been ordained a bishop at the time – Fr. Ayuso Guixot was the only non-Islamic participant at the First Forum of Arab Thinkers in Abu Dhabi on “Interreligious Dialogue and Extremism.” Promoting a “culture of the encounter,” he then encouraged all to pray according to their own traditions.

Also present in the list of members of the new Committee is Monsignor Yoannis Lahzi Gaid, personal secretary of Pope Francis. Mgr Lahzi Gaid is a Coptic Catholic priest who is fluent in Arabic, Italian, French and English and “always on hand,” according to the Emirati press, to translate for the Pope. He was named Second Secretary in April 2014 and was by the Pope’s side during Francis’ visit to the United Arab Emirates last February when the document on Human Fraternity was signed.

The Crown Prince of Abu Dhabi, Sheikh Mohamed bin Zayed Al Nahyan, said that the formation of the committee would “help to implement the shared vision of developing initiatives and ideas to foster tolerance, cooperation and coexistence,” according to the statement published by the Emirates News Agency. “The UAE supports all efforts that promote peace and spread the principles of fraternity and peaceful coexistence worldwide,” he added.

The higher committee has been given a global role, as it will be in charge of preparing “the necessary plans to implement the document,” and will “follow up on its implementation at regional and international levels, and hold meetings with religious leaders, heads of international organizations and others to support and spread the idea behind this historic document.”

The higher committee will also be the authority in charge of supervising the new “House of Abrahamic Family” whose construction was ordered in February by the Crown Prince Mohammad Bin Zayed Al Nahyan on Saadiyat Island in order to commemorate the “historic visit by Pope Francis and Dr. Ahmad Al Tayeb, Grand Imam of Al Azhar, which culminated with the signing of the Abu Dhabi Declaration that heralds a new era in the history of humanity.”

While the Abu Dhabi document declares that religions must “never incite war, hateful attitudes, hostility and extremism, nor must they incite violence or the shedding of blood,” its writers fail to take into account that Islam was imposed through violence, bloodshed and armed conquest, and that the Koran itself, as well as the Hadiths relating the life, deeds and words of the “Prophet” are full of calls to violence towards non-Muslims.

The whole document is also permeated with the masonic vocabulary of “tolerance” and “fraternity” that rests on the idea that all forms of “dogma” or affirmation of a transcendent truth are to be rejected, while religions accept to submit to the principles of the Enlightenment that allow, at best, for the affirmation of a global “spirituality” manifesting itself through a multiplicity of beliefs and traditions.