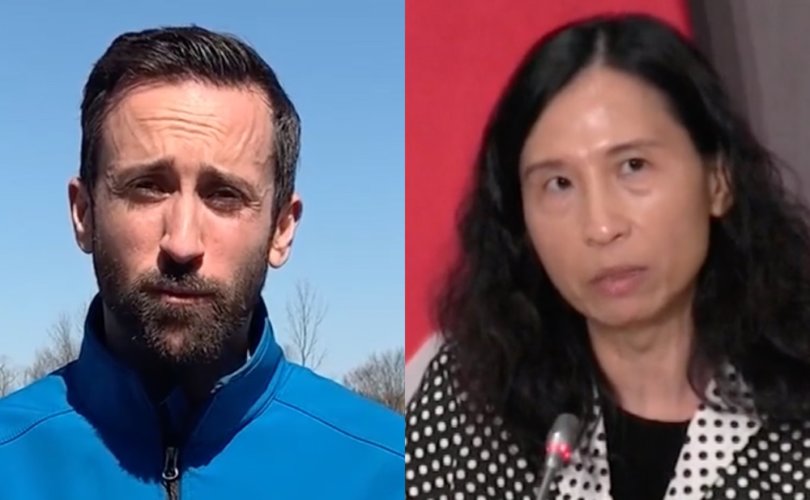 TORONTO, May 6, 2020 (LifeSiteNews) — The “Five Eyes” intelligence dossier confirming that China covered up the coronavirus outbreak and the World Health Organization repeated its lies is a welcome shot in the arm for Canadian Conservative Party leadership hopeful Derek Sloan, says the national pro-life group supporting his bid.

“That intelligence report says China lied and that the WHO repeated the lies. This is total vindication for Derek Sloan,” said Jack Fonseca, director of political operations for Campaign Life Coalition.

But Sloan — who was the subject of an Ontario Conservative caucus secret emergency meeting last week where, according to accounts leaked to the media, he was asked to apologize for his allegedly “racist” remarks — could still be under the threat of being expelled from his party over the matter, Fonseca said.

Sloan, MacKay, O’Toole and Toronto lawyer Leslyn Lewis are the four candidates in the race to replace Conservative leader Andrew Scheer, the winner of which will be determined by a ranked mail-in ballot, with date of receipt no later than August 21.

“The thinking within Conservative circles goes like this: MacKay has enough of an advantage in fundraising, endorsements, and name recognition that O’Toole can’t secure a first-ballot win against him. Instead, O’Toole’s strategy will focus on cobbling together support from the corners of the Conservative tent, where MacKay is not so popular,” wrote Boutilier.

Sloan: Tam should resign or be fired

Sloan sparked a media furor when he released a video April 21 declaring that Tam should resign or be fired for her handling of the coronavirus pandemic, and asking: “Does (Tam) work for Canada or for China?”

The rookie MP pointed out in an accompanying letter that Tam is one of seven people who sit on the World Health Organization’s (WHO) independent Oversight and Advisory Committee, “whose job is to prevent politics from interfering with what happens during health emergencies.”

The “WHO has been a puppet of the People’s Republic of China for over a decade now,” and Tam “dutifully repeats the propaganda of a CCP government obsessed with political control and saving face,” contended Sloan.

In a subsequent letter defending his position, Sloan reiterated that Tam “has shown terrible judgment and great incompetence handing COVID-19. She was wrong on travel bans. She was wrong on asymptomatic transmission. She was wrong on voluntary quarantines. And Justin Trudeau stood by Dr. Tam’s — and the WHO’s — advice every step of the way.”

Sloan’s critique has now been confirmed in a dossier by intelligence agencies of the United States, Canada, United Kingdom, Australia and New Zealand — the so-called “Five Eyes” intelligence alliance — which was leaked to the media last weekend.

The 15-page document blasted President Xi Jinping’s Communist regime for its “assault on international transparency’’ — most notably for refusing to admit until January 20 that the virus is transmitted human to human, and detailed that even as Xi’s regime was downplaying the threat of the virus to the world, it was destroying evidence of it at home, censoring media, and silencing whistle-blowers or making them disappear.

The intelligence dossier also faulted the WHO for uncritically repeating Beijing’s claims and denying human-to-human transmission of the virus, despite Taiwan and Hong Kong raising concerns in late December and early January respectively.

“Derek was right and all his critics were wrong,” Fonseca told LifeSiteNews.

“Shame on them for the hate campaign they waged, most especially his fellow Conservative colleagues [Calgary MP] Michelle Rempel, [Ontario MP] Dan Albas and [Ontario MP] Michael Chong,” he added.

Sloan still under threat of  expulsion from the party

During the conference call caucus meeting last week, Ontario Conservative MPs “were prepared to call for a vote to kick Sloan out of caucus” if he did not apologize for the question: “Does [Tam] work for Canada or China?” two Conservative sources told the Toronto Star.

MP Scott Reid reportedly put forward the motion that Sloan apologize, and only Sloan and O’Toole voted against it, sources told CBC.  They also revealed that Sloan did not offer an apology but said his question was meant to be “rhetorical,” a position he held in a statement released later that day, in which he reiterated his call for Tam to resign or be fired.

In a string of Tweets late last Thursday, Reid condemned the leaks, suggesting the MP responsible should be expelled, and that, like it or not, Sloan did offer a “retraction” of his remarks.

He also suggested that the only one to gain from ousting Sloan — and leaking the information — is another leadership candidate.

“Under the CPC’s preferential ballot system, the 2nd-ballot preferences of Sloan supporters could determine who becomes our next leader. Someone wants to get rid of him. Thus, even if we  don’t know who leaked, we do know why, and for whose benefit,” Reid tweeted.

Fonseca agrees that “from media reports, it seems pretty clear… that it was the Peter MacKay campaign who orchestrated this attempted ouster of Sloan.”

The Ontario caucus includes at least 12 MPs and two senators who have endorsed MacKay, who is known to be hostile to social conservatives and who infamously referred to leader Andrew Scheer’s personal pro-life and pro-family views as “a stinking albatross” around his neck. O’Toole is also pro-abortion and pro-LGBT, and not endorsed by Campaign Life.

With high-stakes leadership politics in play, Sloan could still be under threat of expulsion, according to Fonseca.

“Given the successful red Tory track record of disqualifying social conservative leadership candidates, first Richard Decarie and then Jim Karahalios, we must assume that the anti-Sloan forces are still trying to get the requisite number of signatures to force a vote on expelling Sloan,” he told LifeSiteNews.

It’s therefore critical that social conservatives preemptively mobilize to support Sloan, a lawyer and father of three who is unabashedly pro-life and pro-family.

Campaign Life “is urging all pro-life, pro-family people to contact their local Conservative MP and tell them that if a motion to expel MP Derek Sloan comes before the national CPC caucus, they must vote against it,” Fonseca said.

Campaign Life has provided a list of all Conservative MPs, and their contact information, beginning with those in the Ontario caucus. To contact these MPs to voice support for Derek Sloan, go here.

Campaign Life is also urging social conservatives 14 years of age and older to buy Conservative Party memberships by May 15 to be eligible to vote for the new leader.