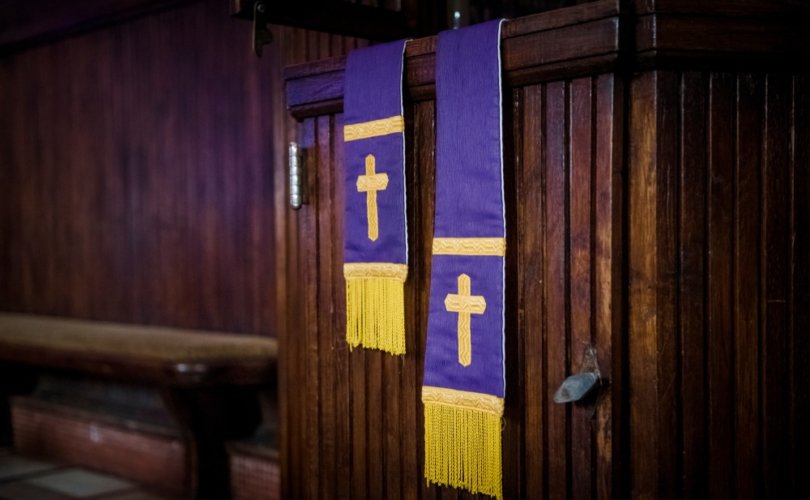 BISMARCK, North Dakota, January 15, 2021 (LifeSiteNews) — A North Dakota bill would force priests to break the seal of Confession, and they would face 30 days in prison and/or a fine of $1,500 for not complying.

S.B. 2180 would compel priests to report information about child abuse heard in the confessional or face 30 days in jail and/or a fine of $1,500. It does not specify what a priest would be required to do when a confession is behind a screen or anonymous, which they often are. In essence, the bill would amend the state’s current mandatory reporting laws on child abuse or abuse of vulnerable adults by striking out any previous exceptions that were extended to clergy in the confessional.

Priests are bound by the seal of confession, and until now, North Dakota laws have respected that. According to the Catechism of the Catholic Church, #1467, “[g]iven the delicacy and greatness of this ministry and the respect due to persons, the Church declares that every priest who hears confessions is bound under very severe penalties to keep absolute secrecy regarding the sins that his penitents have confessed to him. He can make no use of knowledge that confession gives him about penitents’ lives. This secret, which admits of no exceptions, is called the ‘sacramental seal,’ because what the penitent has made known to the priest remains ‘sealed’ by the sacrament.”

Some argue that it is not necessary to encroach upon religious freedom when clergy are already bound to report abuse in their professional capacities and have done so. However, if a priest is acting under his spiritual capacity in the confessional, that is a different story. He is bound by the seal of confession to say nothing of what he has heard.

Christopher Dodson, the executive director of the North Dakota Catholic Conference, says the bishops plan on pushing back against the bill, arguing that that they have been forthcoming on reporting child abuse. In fact, the bill proposal came on the heels of an investigation on child abuse that lasted 18 months in North Dakota’s two dioceses. The results of that investigation confirm “that all but one accusation of abuse by priests in the diocese had already been reported,” per the National Catholic Register.

Dodson told LifeSiteNews, “We are going to oppose it. We are getting ready let senators know that this an invasion of religious freedom and of the expectations people have of privacy in religious counseling and in confession.”

The Vatican’s Apostolic Penitentiary released a “Note on the importance of the internal forum and the inviolability of the Sacramental Seal” in 2019 addressing the question of breaking the seal of confession due to legal and societal pressure. “The inviolable secrecy of Confession,” the document reads, “comes directly from revealed divine law and has its roots in the very nature of the sacrament, to the point of admitting no exception in the ecclesial sphere, nor in the civil sphere.”

This is not the first time lawmakers have attempted to dismantle the seal of confession. In February of 2019, California senator Jerry Hill introduced a bill to the state Legislature there that would mandate that Catholic priests expose information gleaned in the confessional regarding child abuse. In 2006, New Hampshire also attempted to push a bill that would violate the seal of confession despite mandatory reporting laws already in place. And according to a 2019 Bismarck Diocese blog post, “[a] similar law passed in South Australia in 2018, but bishops and priests there have publicly vowed never to break the seal of the confessional.”

Per canon law, even though priests are held to the seal of confession, when a criminal confesses a grave sin that could endanger others, for example, the priest is within his rights to withhold absolution unless the penitent agrees to turn himself in.

Some priests from the Bismarck diocese explain that although they seem well intentioned, such laws would infringe on religious rights and potentially cause more harm than good.

Fr. Greg Luger, St. Joseph, Williston, was quoted in the Diocese of Bismarck’s 2019 blog post regarding the issue:

How many people in dire need of this sacrament would refuse to receive it if they knew that the priest would turn around and testify against them in court? Also, the seal protects the priest. If this exemption is gone, then anybody could levy a false accusation and have him jailed. This could also result in a sting operation wherein a priest ends up in prison for simply doing his priestly duty.

Fr. Chris Kadrmas, diocesan judicial vicar of Bismarck, said in the same post, “My reaction to the bill is that it is foolhardy, but this development is not surprising in the current post-Christian culture in the West. It is foolhardy in two ways: first, this is a no-brainer for priests. We will not break the Seal of Confession. It is drummed into us throughout seminary formation that maintaining the Seal of Confession will be one of the most important things Mother Church will expect of us as priests. (See canon 1388, 1: Code of Canon Law.) Second, how will any infractions be discovered, enforced, and successfully prosecuted?”