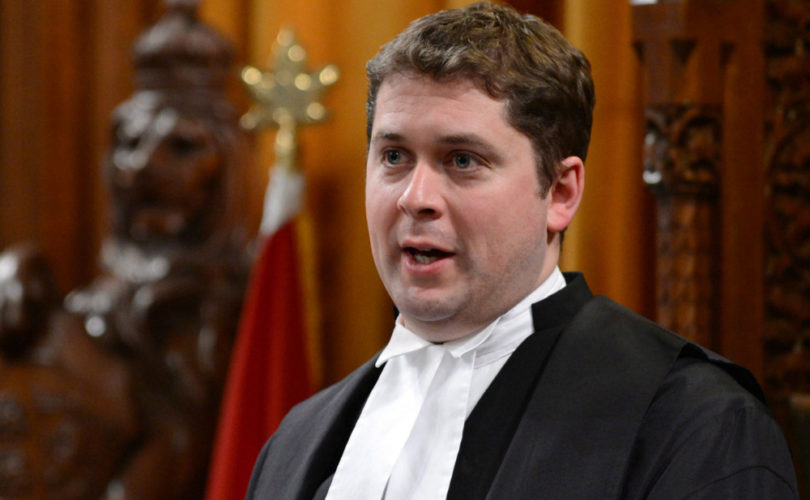 August 1, 2019 (LifeSiteNews) — Christian psychotherapist Dr. Ann Gillies was six weeks into campaigning for the Conservative Party of Canada nomination in her Ontario riding when she received a curt email from party executive director Dustin Van Vugt telling her she’d been disallowed.

A longstanding party member whose campaign in Bruce-Grey-Owen Sound had been building “really, really good momentum,” Gillies was “shocked” — not just that she’d been disqualified, but that the party gave no reason for its decision.

But she has a good idea what was behind it, Gillies told LifeSiteNews.

A source close to the party, whose identity she won’t reveal, told Gillies her public criticism of the LGBTQ agenda and transgender ideology was her undoing.

“Well, that would be the only reason that they would disallow me. There would be no other reason,” Gillies told LifeSiteNews. “I can’t prove any of this.”

Although Gillies was reinstated on appeal, the national council rejected her again eight days later. Her source told her then that “someone who was very high up in the party, who really did not want me in the party,” had relayed quotes to the council from Gillies’s 2017 book, Closing the Floodgates.

The book is described on its back jacket as an exposé of “how a determined minority is using social engineering to reconstruct our social and moral worlds by redefining gender, sexuality and the family.”

“I maybe am a bit of a media storm in the sense of what I speak about, and what I write about, but it is all fact-based,” Gillies told LifeSiteNews.

Jack Fonseca, director of political operations for Campaign Life Coalition, says he heard the same from his sources within the Conservative Party.

Fonseca broke the Gillies story in June as Exhibit A of a growing body of evidence he says makes it clear the Conservative Party of Canada is icing out pro-family candidates with leader Andrew Scheer’s blessing.

Indeed, so marked is this trend that a socially conservative Tory M.P. told Fonseca: “If I were running for nomination for the first time today, I honestly don’t know if the party would accept me.”

Gillies was disqualified the first time based on “a YouTube video of a lecture she gave to a church group in which she discussed the phenomenon of Rapid Onset Gender Dysphoria, and criticized school curriculum for pushing gender identity theory and the LGBT agenda on children,” Fonseca told LifeSiteNews.

According to his sources, after Gillies appealed the decision and won, Scheer’s office was not pleased and insisted that the National Council disqualify her again, Fonseca said.

“Scheer’s office presented numerous pages from Dr. Gillies’ book as evidence she must be banned as a candidate. What was in the book that was so bad? Nothing, if you happen to be a biblical Christian, Jew, Muslim or another tradition who believes in natural marriage,” Fonseca said.

“Of course, the unpardonable ‘crime’ committed here by Gillies, according to Scheer’s advisors, was that LGBT ideology was a significant theme explored in the book, and that would supposedly cause the party to lose the election when the liberal media found out.”

But Gillies’s beliefs are “mainstream in her rural riding and in many parts of Canada,” Fonseca pointed out.

That includes “with important swing voter blocs in some urban areas where, if anything, her beliefs would increase the CPC’s chances of defeating the Liberals.”

Cory Hann, communications director for the Conservative Party of Canada, denied that the party discriminates against pro-family members.

“Unlike the Liberals, we’re a grassroots supported party where members ultimately decide their candidate. All of our nominations are completely fair and open, and our rules and procedures are clear — we apply these equally to all candidates in all ridings,” he told LifeSiteNews in an email.

“The Conservative Party is a big tent party where a variety of views are welcomed and allowed, and where we’re joined together by the common goal of uniting Canadians, not dividing them.”

But Hann conceded that disallowances are part of the process.

“In the rare case a nominee may be disallowed, it is never a decision the party takes lightly,” he said.

Fonseca says Hann’s “bafflegab” response implicitly confirms his contention that Scheer and top party brass, notably campaign manager Hamish Marshall, have intervened in the nomination process to block individuals who publicly express belief in the traditional definition of marriage or that there are two sexes as opposed to multiple genders.

The Conservatives also disallowed Salim Mansur in June as the candidate in London North Centre. The decision was widely criticized by conservative pundits, including Andrew Lawton, who reported that Marshall told Mansur the party was concerned his writings could be construed as Islamophobic.

It’s worth noting Mansur’s disqualification came not long after he tweeted photos of himself taking part in the National March for Life in Ottawa, an event organized by Campaign Life Coalition, Fonseca said.

Fonseca says he know knows of several other outspoken pro-life and pro-family nomination candidates who’ve been disqualified or otherwise blocked from running.

After she lost her job with the 700 Club in April 2018 because of her lobbying against British Columbia’s infamous Sexual Orientation and Gender Identity (SOGI) 123 curriculum, she decided to run for the Conservative nomination in New Westminster, Tyler Thompson told LifeSiteNews.

She had asked the party to waive its rule that a candidate must be a party member for six months, a request she says it grants “liberally” to those who ask, when she heard that the party was acclaiming 24-year-old Megan Veck, who at the time was living in Ottawa.

“I got a letter of rejection ultimately from Dustin Van Vugt and [national party president] Scott Lamb. I then wrote a very impassioned letter why, and I never received a response,” Tyler Thompson said.

She applied next to run for the Conservative nomination in South Burnaby, B.C., but the party acclaimed Jason Shin.

“I heard via the grapevine … the higher-ups had had concerns because my posts on my Facebook, which I had refused to remove,” she told LifeSiteNews.

The posts “state facts about gender fluid ideology … I thought, no, I abide by these and the Conservative Party agrees with me, do they not? We shouldn’t be teaching little boys they can be a little girl,” Tyler Thompson said.

“Is this not the party that would stand with me as I now stand for my country? And apparently they are not.”

Fonseca concurs with Tyler Thompson’s assessment of why the party didn’t want to let her run.

“Her TV show devoted episodes to criticizing the teaching of gender identity theory to children and urged viewers to push back against classroom indoctrination,” he told LifeSiteNews.

“Does the party expect us to believe that’s not the real reason why it banned her from seeking the Conservative nomination? Give me a break.”

In her first appeal letter to the Conservative national council, Gillies argued that her disallowance directly contradicted Scheer’s message to a town hall on March 7, 2019.

“You won’t get kicked out of the Conservative Party of Canada because you come from a different perspective or have a different view on issues that are important to you, whether it’s based on faith or your own personal option,” Scheer said then.

Moreover, disallowing her candidacy “may be viewed as expressing intolerance within the party,” Gillies wrote.

“To interfere without justification in the grassroots nomination process strikes at the heart of the democratic process,” she noted. It also “has the undesirable effect of turning otherwise faithful party members into angry opponents.”

Indeed, Tyler Thompson; Mansur; and Angelina Ireland, another outspokenly pro-life nomination candidate who alleges that the party “froze me out” to the point where she felt compelled to withdraw her nomination application in Delta, B.C., have all become candidates in Maxime Bernier’s People’s Party.

Tyler Thompson ran against Shin in the Burnaby South by-election and won 11 percent of the vote. She has now moved to Alberta to run for the People’s Party in Red Deer-Lacombe.

Bernier “has people in his party who are atheists, he has gay people, he has people who don’t agree, but the point is we are Canadian and we have our rights,” she explained.

“And that is where the Conservative Party of Canada has lost the game, they have lost the narrative,” she said.

“We have the most important election of all of history, because this is a big deal. These issues, especially transgenderism, are taking over the nation and so if we do not fight this, we will not recognize our nation in 10 years,” Tyler Thompson told LifeSiteNews.

“We don’t have time for four years of a Conservative Party of Canada government who will bow to the ideology and refuse to allow us to stand.”

Prime Minister Justin Trudeau was roundly criticized, even by the media, when he decreed in 2014 as Liberal leader that pro-life Canadians would not be permitted to run as Liberal candidates.

Now Scheer’s Conservative Party is “deploying the exact same policy” to “deprive Canadians who are religious believers from being able to participate in party democracy,” alleged Fonseca.

The party’s top brass blocked Gillies “not for her strong pro-life beliefs, but for her pro-traditional marriage and pro-biblical sexuality beliefs. This is just as discriminatory as  Trudeau’s ban on pro-life candidates” and makes Scheer’s criticism of Trudeau on this score “stunningly hypocritical,” he said.

Moreover, “Scheer’s continual efforts to appease the left by adopting Liberal-lite positions, his embrace of LGBT ideology which appears to be growing daily, and his discrimination against socially-conservative nomination candidates has caused the party to lose a significant portion of its base,” Fonseca asserted.

That’s reflected in the most recent polls, which suggest the Conservatives have lost their lead over the Liberals, he said.

“The SNC Lavalin scandal fell into the their laps quite by accident and gave the party a temporary lead they could have kept by continuing to energize their small-c conservative base with truly conservative policies, like those which respect the family, free speech, parental rights and at least some nod to the sanctity of life. They’ve done the opposite,”observed Fonseca.

“I’m saddened to say that Scheer and his right hand man, Hamish Marshall, are snatching defeat from the jaws of victory by bumbling their way through this campaign in such an unprincipled manner,” he added.

“Everybody knows you can’t win an election without your base.”