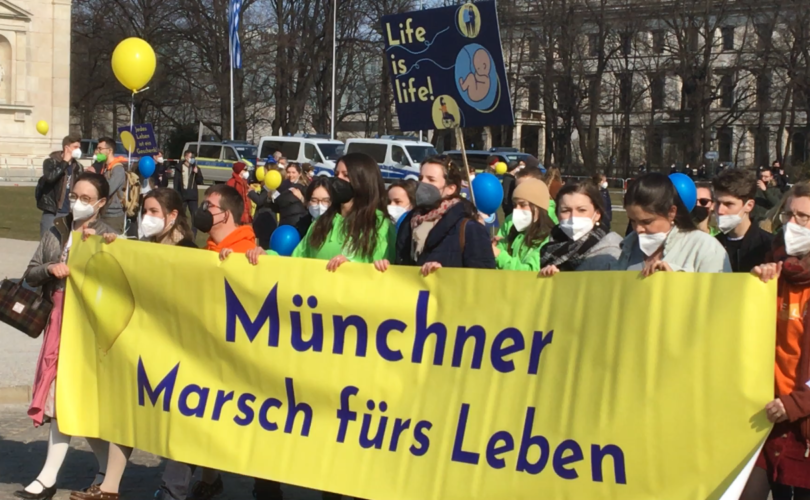 MUNICH, Germany (LifeSiteNews) — On Saturday, March 19, an estimated 2,000 pro-lifers witnessed on behalf of the unborn at Munich’s March for Life. The turnout more than doubled last year’s attendance of 800, which had been severely hindered by Covid restrictions and capacity limits.

Demonstrators gathered at Konigsplatz near Munich’s city center, singing traditional German songs as they marched. At the end, demonstrators let fly balloons with the pro-life message attached to them, “Every life is a gift; maybe this one will change the world.”

Speakers joined in person from different parts of Germany, Austria, and Italy, including one of the members of the Austrian Hapsburg royal family. One speaker, addressing the abortion industry’s attempt to target babies with Down syndrome, declared that she thanks God every day for her own beautiful Down syndrome sister and the wonderful gift she has been in her life. “In my life, I have met many women who regret having an abortion,” she continued, “but I have never met anyone who has regretted giving life.”

Archbishop Nikola Eterovic, the Apostolic Nuncio, and Bishop Stephan Oster of the Diocese of Passau sent a message to the marchers in support of their witness. “The unconditional protection of human life is a central concern of our faith. I thank you all very much for your clear commitment,” Oster wrote to the marchers.

Liberal Cardinal Reinhard Marx, however, whose cathedral was not far from the march, did not respond to an invitation to participate. Despite the absence of any German bishops or political leaders, the March for Life and its message continue to gain attention and strong support among young Catholics and families.

Germany currently commits about 100,000 abortions every year, organizers of Munich’s March for Life told LifeSiteNews. Although the country maintains some of its former laws against abortion, it was decriminalized in 1993, effectively making all laws against it moot. Among the country’s politicians, leaders are either pro-abortion or silent on the matter. None of the conservative politicians or candidates for office run their campaigns on a pro-life platform.

Among Germany’s bishops, there are some who have even expressed hostility and opposition to pro-life work such as the March for Life.

Germany’s largest March for Life takes places each year in Berlin, the nation’s capital. Berlin’s March has drawn as many as 8,000 demonstrators and continues to grow.