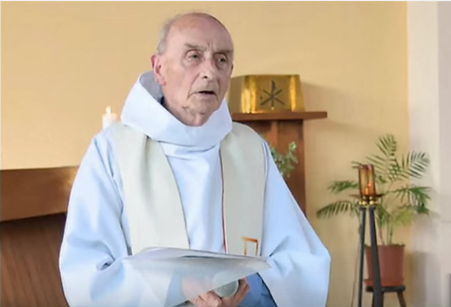 ROUEN, France, August 4, 2016 (LifeSiteNews) — Father Jacques Hamel’s last words before two Islamic State terrorists slit his throat, after forcing him to his knees before the altar where he had been saying morning Mass, were “Go away, Satan!”

And as the 85-year-old priest tried to push the attackers away with his feet, he repeated again, “Begone, Satan!” recounted the archbishop of Rouen during his homily for Father Hamel’s two-hour funeral Mass on Tuesday.

“Evil is a mystery. It reaches heights of horror that take us out of the human,” Archbishop Dominique Lebrun told a congregation of more than 1,500 people that included Muslims, Jews, and state leaders, who gathered in the ancient Gothic Cathedral of Our Lady of the Assumption in Rouen, a port city in Normandy.

“Is not that what you meant, Jacques, with your last words? You fell to the ground after the first stab; you tried to push your attacker with your feet, and you said, ‘Go away, Satan,’” Lebrun said.

“Again you said, ‘Begone, Satan.’ In this you expressed your faith in humanity, created good, but gripped by the devil,” added the prelate, in a translation provided by Aleteia.

Father Hamel was slain July 26 in the parish church of Saint-Étienne-du-Rouvray, a suburb of Rouen, by 19-year-olds Abdel Malik Petitjean and Adel Kermiche, who were later shot dead by police as they ran from the church.

In the first such attack on European soil, the young men took two nuns and an elderly couple hostage; one nun slipped away to raise the alarm, and the 86-year husband of the couple was injured. He remains in critical condition.

The Islamic State immediately claimed responsibility for the terror and murder. The two assailants had pledged allegiance to ISIS, and at the time of the attack, Kermiche was under police supervision and wearing an electronic tag after spending 10 months in custody when he was caught last year trying to travel to Syria.

The gospel reveals that “Jesus healed all who were oppressed by the devil,” Archbishop Lebrun said.

“This is not to excuse the murderers — those who make a pact with the devil! But we must uphold with Jesus that every man, every woman, every human person can change his heart with His grace,” he said.

“This is how we make ours the words of Jesus even as they may seem beyond our strength today: ‘Well! I tell you: Love your enemies and pray for those who persecute you.’”

Archbishop Lebrun also issued a plea to baptized Catholics “especially if you do not come often to church, if you have forgotten how to do it” to “visit a church in the coming days.”

“I extend a simple appeal, to make a first step, one as simple as the life of Father Jacques Hamel,” he said, “to make it plain that you refuse to allow desecration in the holy places, to be a witness that violence will not win in your own heart, to ask for God’s graces for it, to please light a candle in the church, a sign of resurrection; to collect yourself there, and to open your heart to what is most profound; to pray, if you can, to beg for mercy.”

He suggested August 15, the Solemnity of the Assumption, which commemorates the Catholic dogma that Mary, the Mother of God, was assumed body and soul into heaven, would “be a most appropriate day.”

“The Virgin Mary will welcome you with all her tenderness. Let us remember our own mother and pray, God, do not turn away from the pleas of your children, who look to you! God, bring to fulfillment in our hearts what your Son Jesus has begun!”

Father Hamel’s sister, Roselyn, spoke before the homily, saying her brother had refused to become a military officer in Algeria to avoid ordering others to kill. “The God of love and mercy chose you to be at the service of others … until your last breath.”

Lebrun also thanked God for the gift of Father Hamel, who had served as a priest for 58 years at the time of his brutal death, which is widely regarded as a martyrdom, and has led to calls for the priest’s speedy canonization.

Indeed, as Italian historian and writer Roberto de Mattei pointed out, by announcing the start of the process for Father Hamel’s beatification, Pope Francis “would give the world a peaceful but strong and eloquent sign of the will of the Church to defend its identity.”

Father Rutler, who shortly after the French priest was murdered, posted a warning to the West on FaithZette, entitled “A Christian duty in the Face of Terror,” added: “We do not know what Father Jacques Hamel thought about capitalism or climate change, but it is obvious that he loved, and loved intolerably, and, because of that, his last words to his killer were: ‘Va-t’en, Satan!’ — ‘Begone, Satan!’”