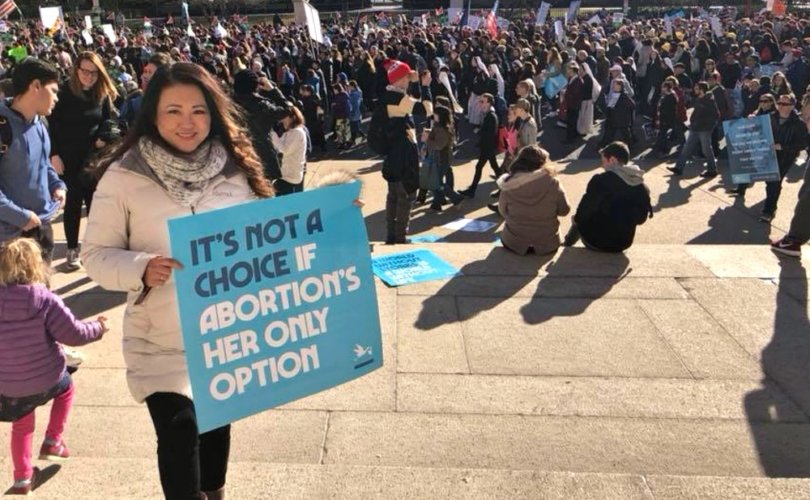 Joyce Bartholomew at the 2018 March for Life in Washington, D.C.

WASHINGTON, D.C., January 23, 2018 (LifeSiteNews) – Powerful pro-life singer Joyce Bartholomew headlined the National Memorial for the Unborn Prayer Service on Friday, the morning of the 2018 March for Life. She sang her signature pro-life song “What was your name?” that Youtube banned in 2014 for violating its “terms of service.”

Bartholomew's abortion regret song has touched tens of thousands of lives with a message about healing and forgiveness. She was the featured performer at the service which was sponsored in part by Priests for Life.  The annual service gathers leaders from across the nation and across the denominational spectrum to join in prayer for the end to abortion and for the success of the March for Life.

“Joyce Bartholomew has a gift from God in her singing,” Priests for Life Director Fr. Frank Pavone endorsed. “She has been using that gift to serve the pro-life cause in a beautiful way which causes people to recommit themselves to protect the children in the womb.”

The service held a special tribute to Norma McCorvey, the “Jane Roe” of Roe vs. Wade, who repented and converted to Christ before her death last year.

Reality TV twins David and Jason Benham were guest speakers at the event, enlivening the audience with their unique banter and lived-out stories of standing up for life against career-threatening pro-abortion pressure.

“Joyce Im Bartholomew captivates the music world with her compassion and artistry to protect the lives of the unborn,” the Benham brothers said.  “Her message of truth impacts the culture and resonates around the world.”

Father Frank Pavone riveted participants during his speech where he made an all-out call to stop the mass slaughter of innocent human lives.

Bartholomew wrote “What Was Your Name?” while reflecting on her experience in counseling women in crisis pregnancy. Her lyrics take the stance of a scared young woman facing the crisis of her life.

“I was alone and afraid, they said I wasn’t ready for you,” the lyrics state. “They said a baby is a ‘big mistake,’ I had no choice, it was all I could do.”

“God alone ordained all your days for you, you could have changed our world,” the lyrics continues. “I wonder what God wanted you to do, were you a boy or a girl?”

The chorus reflects the deep regret of “silent no more” women: “What was your name, what were you meant to be?  I wish I could’ve known you, before you saw eternity.”

Released in early 2014 to widespread success, YouTube censored the video in May, announcing that it “violated” the company’s “terms of service.”

“It did NOT violate anything,” Bartholomew defensively posted on her Facebook page May 16.  “Please pray that it will be fairly put back up. Christians ought to also have peaceable freedom of speech.”

YouTube declined her request to restore the video, and so with the help of the Freedom of Conscience Defense Fund, Bartholomew sued for defamation.

The singer told LifeSiteNews that she was “suspicious” the real reason YouTube pulled her influential pro-life video is because the company is pro-abortion.

Her 2015 trial court ruled that though YouTube’s statement that her video violated its standards was false, it was not specifically defamatory, and so did not qualify legally as libelous.

On Dec. 1, 2017, California’s Sixth District Court of Appeal agreed with the lower court, and awarded YouTube with attorney compensation.

“We do not think that (YouTube’s) removal statement can be deemed to subject (Bartholomew) to ‘hatred, contempt, ridicule, or obloquy, or (cause her) to be shunned or avoided’ or tend to ‘injure (her) in (her) occupation,’” the ruling said.

At the 2018 national prayer service, Bartholomew and her band arrived early to help lead worshipful singing.  She featured her song, “What Was Your Name,” along with other popular songs.  She also closed the service in song.