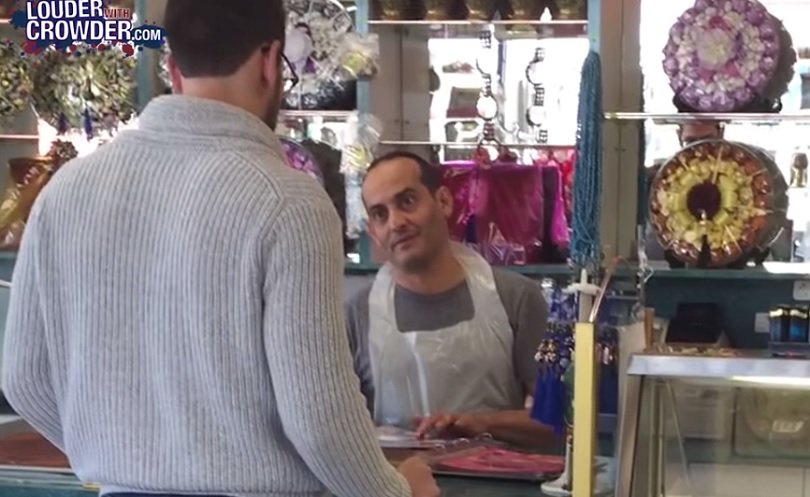 DEARBORN, MI, April 7, 2015 (LifeSiteNews.com) – Homosexual activists have painted Christian bakers, florists, and photographers as veritable hatemongers for refusing to participate in a same-sex “wedding” on religious grounds – but it is not only Christianity that teaches that homosexuality is immoral. In a new video, Steven Crowder discovered numerous Muslim bakeries refused to bake a cake for a homosexual “marriage” – and Crowder is calling homosexuals out for not being equally aggressive toward the Religion of Peace.

Last week, Crowder posted an undercover video in which he visited several Muslim-owned bakeries in the Islamic hotspot of Dearborn, Michigan, posing as a man who planned to “wed” his boyfriend and wanted a cake made to honor their homosexual relationship.

While a few bakeries were willing to create the gay “wedding” cake, “many of them were not,” Crowder reported.

In the video, Muslim bakery employees can clearly be seen and heard refusing to create a wedding cake to celebrate a union of two men.

“No, no, I don’t want it,” said one bakery worker, informed that the cake would be for a homosexual couple’s reception.

Crowder called out the mainstream media for focusing all its attention on Christians when Muslims were more likely to refuse to participate in same-sex nuptials.

“For Christians it only took one lawsuit, yet the media never acknowledges the giant, burqua’d elephant in the room,” Crowder said.

He pointed out that in many Muslim-run countries, homosexuals face more than perceived discrimination – they face death under Shari'a law for violating the tenets of Islam.

“I’m not saying these Muslim bakeries shouldn’t have the right to [refuse to serve gay ‘weddings’],” Crowder added. “They absolutely should – and many more of them would than Christian bakeries,” he said. “That’s why most gay people probably don’t go into Muslim bakeries.”

Crowder ended the video by playing a clip of an argument between two CNN commentators over the right of religious believers to refuse to participate in actions they find morally objectionable.

“Why don’t the photographers just not go into business?” one says, questioning why Christian photographers should be permitted to work if they would abstain from photographing same-sex “weddings.”

“See, when this guy says, ‘Well, then maybe the photographer shouldn't go into business,’ it's very important to know what he’s saying,” Crowder said. “What he is saying is, unless you agree with me and my worldview 100 percent, I should have the ability to ensure that you can't do business, that you can't make a living.”

“Do you honestly believe this is a dialogue of mere hate versus love?” Crowder asked. “Or do you think that religious freedoms come into play at all?”

“And what of the Muslims?” he asked. “Because when it comes to gayness, they’ve made their stance quite clear.”