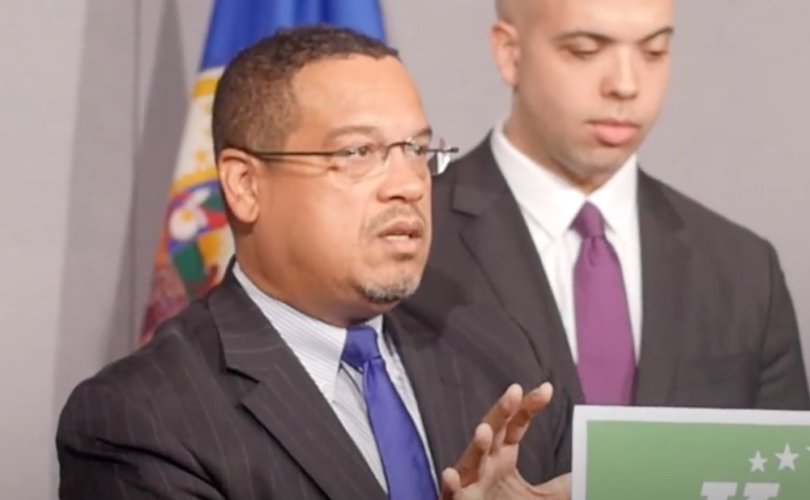 SAINT PAUL, Minnesota, November 5, 2018 (LifeSiteNews) – The Democrat's candidate for attorney general in Minnesota is pushing for schools to have LGBT “safe spaces” and even supports transgenderism for children as young as six years old.

In the lead-up to tomorrow's election, a campaign ad for Democrat Congressman Keith Ellison, a Muslim, extols his support for families with young transgendered kids – little children confused as to whether they are boys or girls.

Although Islamic attitudes towards transgenderism run the gamut, many Muslim countries consider gender dysphoria to be an illness brought upon by Satan.

The Islamic information website Islam Question and Answer clearly states that religion maintains it is not possible for anyone to change their gender.

“Doctors may tamper with him to satisfy his perversion so that he will think that he has become a woman, but he will never be truly female and will live in a state of anxiety and worry, which may lead him to commit suicide,” reads the website.

This couple considers their now-eight-year-old son to be a girl because he started identifying as a girl while he was in kindergarten. In a video on Facebook, they attack the pro-traditional family Republican candidate for attorney general in Minnesota, Doug Wardlow, for allegedly “making a career out of attacking families like ours.”

Wardlow, a former lawyer for Alliance Defending Freedom, a national pro-bono law group famous for defending freedom of religion and expression, is being slammed by the Democrats in this campaign for asserting “the simple reality that there are boys and there are girls and boys and girls are fundamentally different in ways that really do matter.”

That's enough to make the LGBT-activist Edwards back the Democrat in this race.

“[Rep.] Keith Ellison has been an unapologetic ally and defender of public policies that support LGBTQ people and their families,” says Hannah Edwards in the Facebook video.

Ellison wants to see “safe spaces” for transgendered students in schools and special training for teachers to make that a reality.

“Today’s institutions that promote transition affirmation are pushing children to impersonate the opposite sex, sending many of them down the path of puberty blockers, sterilization, the removal of healthy body parts, and untold psychological damage,” Dr. Cretella has said. “These harms constitute nothing less than institutionalized child abuse.”

The Republican campaign team in the race for the attorney general's spot in Minnesota has fired back against the Democrats, claiming that Ellison shows little regard for protecting children.

“Keith Ellison supports and promotes so many extremist views it's hard to keep track of them all,” maintain the Republicans.

They point to Ellison's track record of voting against a bill, proposed in 2004, that would have imposed life sentences on violent sex offenders. Then, in 2013, he also opposed a bill to protect children from sexual predators by prohibiting them from working in schools.

“Time after time after time, Keith Ellison chose to cast votes to support some of the worst offenders of all,” said Republican campaign manager Billy Grant.

The Congressman, who is the vice-chairman of the Democratic National Committee, has also been dogged for more than a decade by allegations of violence towards women.

His former girlfriend, Amy Alexander, alleged in 2006 that he pushed, shoved and verbally abused her and a judge dealt with the matter by issuing restraining orders against both her and Ellison.

Then, in August this year, the Democrat was again accused, this time by ex-girlfriend Karen Monahan and her son of trying to drag her off a bed and shouting obscenities. The politician denied the allegations and an investigation by the Democrats concluded those allegations were unsubstantiated.