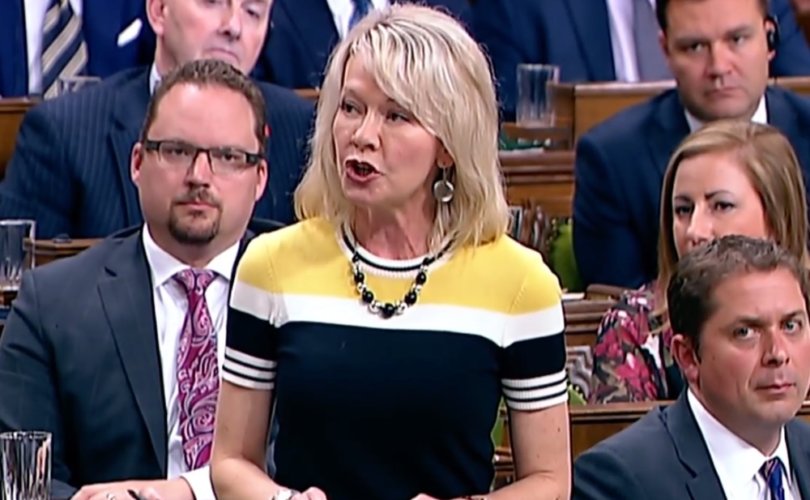 On Sunday, Bergen released a video showing footage of a recent Al Quds Day rally in Toronto by a Muslim group called the Islamic Humanitarian Service group, which she said was meant to “incite hatred and it was an anti-Semitic rally against Jews.”

The rally featured a Jewish Star of David made of barbed wire. “You will leave in body bags, the same body bags you have caused for the Palestinians, your army and the Israeli forces will leave from Palestine in those same body bags,” the speaker ranted. “We pray to the creator, to the almighty, a day will come when we see justice throughout the world, the eradication of the unjust powers, such as the American empire, such as the Israeli Zionists.”

The video notes that the group received more than $20,000 in taxpayer funds in 2017 through the Canadian Summer Jobs Program, and its public support was renewed this year.

The Canada Summer Jobs program provides additional funds for groups that hire students for summer positions. It’s projected to fund almost 70,000 student jobs this summer, but this year controversy has arisen because it now requires participating organizations to sign an attestation that their “core mandate” agrees with a variety of left-wing positions, including a “right” to abortion — regardless of whether the organization is involved in political advocacy against abortion.

Trudeau readily condemned “hate-filled speech of all types” as an affront to Canada’s welcoming nature. But then Bergen challenged that his “actions speak otherwise,” revealing the group’s government funding and noting that the same program denies funds to mainstream charities that refuse to sign its attestation.

“Why is the prime minister allowing certain religious organizations to be funded to promote hatred towards Jews, but saying no to churches that want to help the homeless?” she asked.

Trudeau responded by attacking “Stephen Harper’s conservatives” for advocating funds for pro-life political groups. “We believe that public funds should never be used to actively fight against the rights of Canadians,” he said, “and we will ensure that no money from Canada’s summer jobs program is refunded to organizations that violate the Charter of Rights and Freedoms, that use hate against other Canadians of any type.”

“I could not believe the hypocrisy of Trudeau and the Liberals,” Bergen says in the video, “where they’ll give money to organizations that are spewing hatred, enticing hatred, doing it publicly, and they’re hiring students to do it. The Liberals will give them money, but they won’t give funding to churches or to faith organizations that are helping the homeless, that are helping people in need.”

Among the organizations to lose funds because they refused the new policy are a summer Bible camp in Alberta, a rural museum on the history of Port Hood, Nova Scotia, a small, family-owned agriculture irrigation business in Alberta, a Christian farm that provides free vacations to poor families, and the Catholic Archdiocese of Toronto.