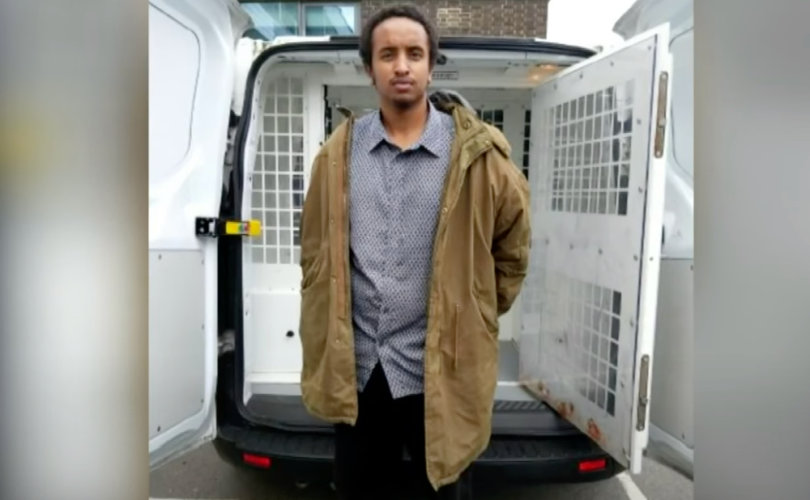 UPDATE April 13: 26-year-old Muslim terrorist Ali Harbi Ali has been sentenced to life imprisonment for the murder of Sir David Amess, in October 2021.

Mr. Justice Sweeney stated that “that the defendant must be kept in prison for the rest of his life.”

Ali was found guilty April 11, after the jury took just 18 minutes to unanimously find him guilty of the murder of Sir David, along with conspiracy to kill other Members of Parliament (MP).

WESTMINSTER, U.K. (LifeSiteNews) – A 26-year-old Muslim man has been found guilty of murdering Sir David Amess, a Catholic politician in the U.K., after he defended the murder during court hearings last week.

On April 11, 2022, the jury in London’s Old Bailey court took only 18 minutes to find 26-year-old Ali Harbi Ali guilty of murdering Sir David Amess. Sir David, a Catholic member of the Conservative party, was meeting with his constituents October 15, 2021, when Ali, a British national of Somali origin, stabbed him over twenty times. Sir David died on the scene.

The jury found Ali guilty of murder and of preparing acts of terrorism, and he will be sentenced April 13.

Praying most especially this evening for the repose of Sir David’s soul, for his bereaved wife, family & friends.
A good man taken from us at a time when we need the witness of good men & women.
May the Lord grant him eternal rest & the beatific vision. https://t.co/x78DPTs5mj

During the hearing, Ali had freely admitted to killing Sir David, defending his actions saying it was to prevent the Catholic politician from “harming Muslims” in Syria. “I decided to do it because I felt that if I could kill someone who made decisions to kill Muslims, it could prevent further harm to those Muslims,” Ali told the court, referring to Amess’ voting record on British foreign policy, including air strikes on the Middle Eastern state.

The court heard how Ali had become radicalized while studying medicine in university and dropped out of his studies with a view to travel to Syria and join “Islamic State.”

When this plan proved too difficult, Ali decided to “help Muslims here,” resulting in his planning a series of attacks upon a number of high-ranking politicians, though only the murder of Sir David came to fruition. Ali had planned on attacking Cabinet Minister Michael Gove; Sir Keir Starmer, the leader of the Labour Party; along with Dominic Raab, the Deputy Prime Minister and Ben Wallace, the Defense Secretary.

However, after he had “scoped out” various attacks and carried his murder weapon with him during the summer, he decided to murder Sir David out of ease.

Ali booked an appointment to meet with Sir David during a regular “surgery,” or meeting with constituents, providing a fake address when booking the appointment.

“He can’t vote again,” Ali said of Sir David as a justification for the murder, adding his hopes that the murder would “perhaps send a message to his colleagues.”

Asked whether he regretted his actions, Ali said “no.” To “encourage someone to an act of jihad” is “a good thing,” he said.

During the hearing, Ali denied accusations of terrorism and radicalism, claiming that if he is considered a terrorist, then so too should “the British politicians who bombed Syria,” while stating that he is “a moderate Muslim.”

The jury heard how Ali had planned to die as a “martyr,” presuming that he would be shot by police. However, when plain-clothes officers entered the building without firearms, Ali was arrested without further bloodshed.

Police on the scene prevented a Catholic priest from administering the Last Rites to Sir David, even though they had already apprehended Ali, defending their decision saying that a priest could not enter a crime scene. The decision by the constabulary prompted an outcry, both from members of the Catholic hierarchy and Sir David’s fellow Catholic Members of Parliament (MP).

A new policy, published March 2022 by the British College of Policing, clearly states that priests may be permitted to access crime scenes to administer the Last Rites to a dying victim.

Sir David played a hidden, but key role in strengthening U.K.–Vatican relations for many years. For Pope Emeritus Benedict XVI’s 2010 visit to the U.K., Sir David was part of a select group invited to Holyrood Palace in Edinburgh to welcome the Pontiff, along with the Queen, due to his role as Chairman of the All Party Parliamentary Group on the Holy See.

A father of five, Sir David reflected his faith in his voting record on issues of abortion and LGBT ideology, consistently voting in a pro-life manner, including against assisted suicide and “buffer zones” around abortion clinics to prevent pro-life street counseling.

“Everything I have done as an MP I have been driven by the preservation of life,” he declared while campaigning in 2010. “I think we should preserve life at all cost, whether that is limits on abortion or not paving the way for assisted suicide.”

He also consistently voted against same-sex “marriage,” despite public criticism from his daughter for his position, as she supports LGBT ideology and declares to be “very pro-gay rights.”

Sir David, an MP since 1983, joined a number of prominent Catholics from the U.K. in signing an open letter expressing their “profound dismay” at the Vatican’s secret “sell out” deal with China.

In November 2020, Amess joined fellow parliamentarians to demand that the government ease restrictions on churches so that religious ceremonies could occur at Christmas. “Whatever replaces the current restrictions in England from 3 December — whether that is new national measures or a local approach — we must never again stop people from attending religious services,” the 70 politicians wrote.