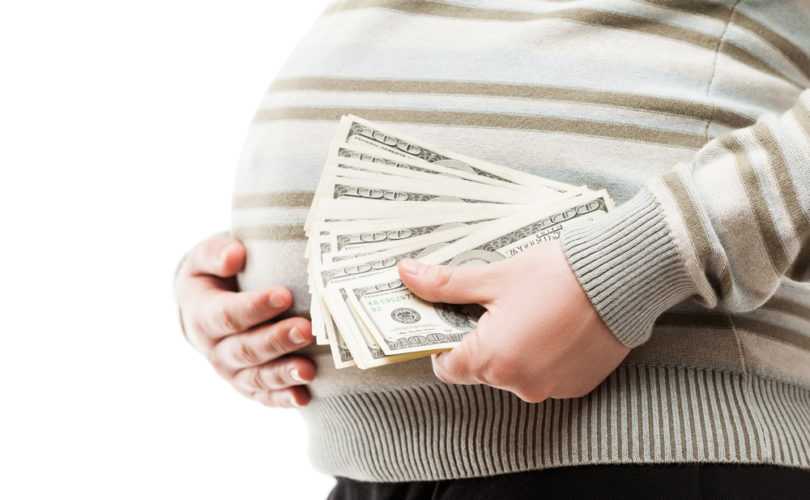 In the years since the fall of communism, Russia has emerged as a country unafraid of religious affiliation and unthreatened by the moral influence of Orthodox Christianity.  Along with passing laws defending marriage, the family, and the sanctity of life, Russia has fearlessly held strong against global criticism and ridicule for its stand against homosexual propaganda to children and against pornography — even censoring websites devoted to hardcore smut.

But one moral area the country has yet to confront is surrogate motherhood. The financial incentive alone brings poor women in droves, economically coerced into a willingness to rent their bodies to strangers.

NewsDeeply reported that 2,000 children were born under contract in 2016 alone. That figure is backed up by the pro-surrogate group European Center for Surrogacy. Meanwhile, the state news agency RIA Novosti reported one quarter of that figure — 500 children — are born to surrogate “mothers” annually.

Russia is undeniably one of the world’s most favorable nations for the surrogacy industry. Not only is motherhood-by-substitute legal, but the business goes largely unregulated.

Russia has become “a sort of reproductive paradise,” Konstantin Svitnev, head of the Center for Reproductive Law and Ethics, lamented. “Being the country with the most favorable legislation … where no specific federal law regulates any aspect of assisted reproduction.”

All that is legally required for Russian women 20-35 years of age to offer their womb-for-rent is to have already had a child and pass a medical exam. Russian law helps all parties remain anonymous so there is no social stigma for the mother or the “parents.”

The average payout for surrogate mothers is $14,000, which is, for example, a year and a half of wages for an average teacher.

Besides the financial temptation, broken marriages contribute to the problem. “Often women come to us because they need money to feed their kids, especially if her husband has left the family,” a Saint Petersburg surrogacy agency manager said. “Most of them also have to pay credits or mortgage loans to the bank.”

And business is booming. One hundred surrogacy businesses dot the countryside.  Moscow alone hosts 40 such centers.

All of this commercial success, despite the Russian Orthodox Church’s disapproval in the strongest terms.  The Church boasts greater influence than the government over the populace, but its insistence that surrogacy is sinful has not stopped the lucrative practice among a very poor populace.

The Church has repeatedly called on the State Duma (the Russian Parliament) to ban surrogacy outright. In its social blueprint for a positive moral society, the Church officially categorizes surrogacy as “unnatural and immoral.”

“This is mutiny against God,” the Patriarchy Commission for Family, Motherhood and Childhood’s Dmitry Smirnov charged. “This is very happy fascism with a contract, the money and confiscation of a child.”

“This is an immoral thing to do in a country that has tens of thousands of orphans waiting to be adopted,” MP Vitaly Milonov stated MP Vitaly Milonov, who championed Russia’s ban against homosexual propaganda to minors. “Making oneself a neat and clean baby is something akin to buying a new model Ferrari.”

Senator Anton Belyakov (Vladimir region) is re-proposing a complete ban. He says commercial surrogacy is like prostitution. “It is immoral and brings harm to both mother and the child,” Belyakov told NewsDeeply.

The stir of controversy reached a head when a famous national pop star, 64 year-old Alla Pugacheva, contracted a surrogate to gestate a baby for her and her 37-year-old husband, Maxim Galkin. The couple already had two surrogate children.

Smirnov, speaking as a senior representative of the Orthodox Church, condemned the famous couple’s “unnatural” arrangements. “I would ban this,” he said, not only for the sake of the couple and surrogate woman and baby involved, but for the sake of their example to the nation. “A bad example is contagious.”

Commercial surrogacy (surrogate motherhood for pay) is legal in Russia, Ukraine, South Africa, and several U.S. states. Non-commercial, or “altruistic surrogacy” -— when a family member bears a child for a childless couple without pay — is legal in the UK, Australia, Canada, Ireland, Denmark, Belgium, India, Israel and several other nations.

In India, relatively low payments to extremely poor women created a $2.3 billion industry and made the nation the world’s surrogacy mecca. However, increasing restrictions, from limiting legal surrogacy to only Indian couples to the March 2017 ban on all commercial surrogacy, have cut down on business.