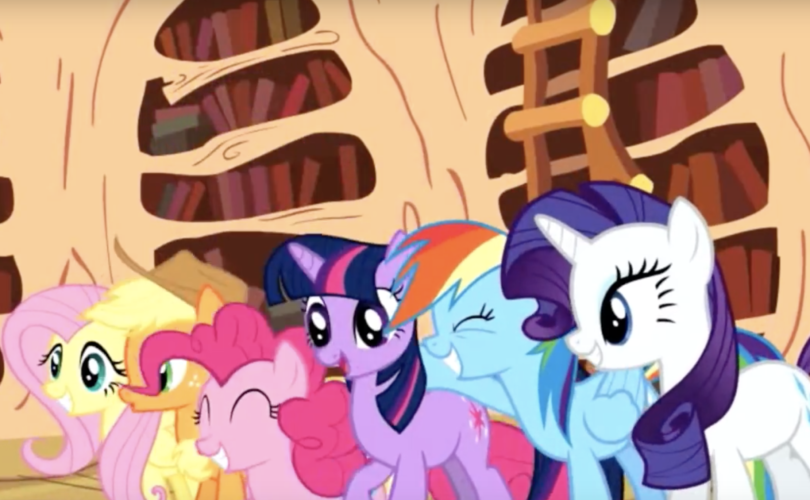 A cartoon series based on the Hasbro company’s popular figurines aired an episode in which a same-sex female pony couple take charge of a school-aged pony named Scootaloo. Previously released in Europe, “The Last Crusade” was broadcast Saturday on the Discovery Channel.

In an interview with Buzzfeed News, writer-producer Michael Vogel said he and co-writer Nicole Dubuc were delighted to introduce a same-sex couple, “Aunt Holiday” and “Auntie Lofty,” to the children’s show.

They had the full permission of the company that owns the “My Little Pony” franchise.

“Nicole and I thought this was a great opportunity to organically introduce an LGBTQ couple in the series, and we asked Hasbro and they approved it,” Vogel said.

He voiced his belief that “diversity and representation are important for kids for so many reasons” and said it is his “first priority on everything” he works on.

Although airing the episode in June, known to LGBT activists as “Pride Month,” wasn’t intentional, Vogel told a fan on Twitter that “it’s a coincidence that seems like it was meant to be.”

In another tweet, he celebrated the introduction of same-sex attracted ponies to the equine cartoon by writing: “Hey hey!!! @NicoleDubuc, @joshhaber and I doin what we can to bring more EQuality to EQuestria!! #PrideMonth.”

The lesbian characters previously appeared in a “My Little Pony” book published in 2017.

The “My Little Pony” toys were first released on the market in the 1980s, and its sales were assisted by a cartoon series based on the toy. In 2010, the brand was rejuvenated when the My Little Pony: Friendship is Magic series introduced the toy to a new generation of little girls.

The show also attracted a fan following among adult men, who created a subculture based on their shared love for the My Little Pony cartoon and its merchandise. Called “Bronies,” the subculture has been featured in two documentaries, “Bronies: The Extremely Unexpected Adult Fans of My Little Pony” (2012) and A Brony Tale (2014). According to the latter film, “My Little Pony” was originally aimed at children ages 2-11.

Unsurprisingly, then, adults have taken to Twitter to celebrate the introduction of an adult theme to the children’s show. However, not everyone was thrilled.

“They hate you. They hate your children. And they want them groomed,” tweeted Shawn Mathis.

Caroline Farrow, an English mother of five, told LifeSiteNews that “it’s a shame everything has to be sexualized.”

It’s a cartoon series with which Farrow is familiar because her children like it.

“All the ponies have friendships with each other. So a lesbian couple introduces a completely unnecessary romantic element,” she added.

“I would feel the same if they had a straight pairing.”

Michael Hichborn, American father of seven and the president of Lepanto Institute, says the intentional introduction of homosexuality to children is why he doesn’t have a TV.

“This is precisely why we do not have access to television in our house,” Hichborn told LifeSiteNews.

“The sexual indoctrination of children into deviant lifestyles is so pervasive that it is becoming very difficult, if not impossible, to avoid. It's in the schools, the libraries, television commercials, all over the internet, and now in children's cartoons,” he added.

“To be honest, I actually wonder how long it will be before such programs and institutions will find 'cute' ways of desensitizing children to necrophilia or bestiality.”