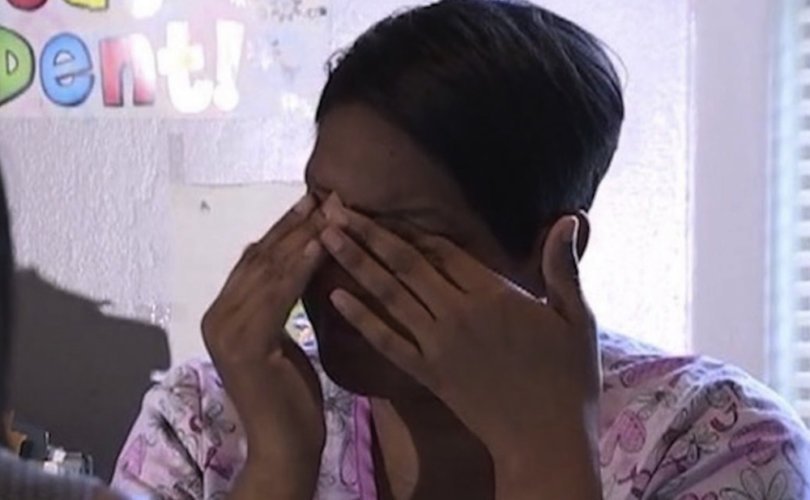 Miracle Foster was distraught after learning her daughter was given a contraceptive implant without her knowledge.KOKI-TV screenshot

TULSA, Oklahoma, April 12, 2017 (LifeSiteNews) — An Oklahoma mother allowed her daughter to go on an educational field trip only to have her return with a three-year chemical contraceptive implant inside her arm.

Langston Hughes Academy hosts an annual sex-ed class by Youth Services of Tulsa. When Miracle Foster's daughter wanted to learn more, she allowed her to visit the clinic.

But Youth Services of Tulsa is part of the Tulsa Area Teen Pregnancy Prevention Collaborative, whose PregNOT program began in 2010 with $1.5 million in tax funding from the Obama Health and Human Services' Office of Adolescent Health. Its stated goal is to reduce pregnancy among poor youth ages 11-19 via “youth-friendly” contraceptives.

Youth Services of Tulsa argued that they legally do not have to tell a parent when contraceptives are implanted inside schoolchildren. Title X allows for youth as young as age 12 to receive “birth control” — even abortifacient contraceptives — without a parent's consent.

The Academy principal also defended the action, saying the school merely transported teens to the clinic. Principal Rodney L. Clark released a statement saying “The student was well within her rights of Title X, which is a federal guideline that provides reduced-cost family planning services to persons of all reproductive age.”

“I just feel like my rights as a parent were violated,” a distraught Foster told local Fox station KOKI. “I feel like the school is responsible. I think they should’ve given us more information, because like I said, I thought she was going to get information. … So, therefore, she could come back home and we could discuss what was best for my child.”

“I think that is something that a mother and a daughter should discuss,” Foster said, weeping.

Youth Service of Tulsa has been in “partnership” with Langston Hughes Academy since 2013.

Church Militant asked Clark if parents were given an opt-out form to remove their children from the annual sex-ed class. Clark said an opt-out form was provided by Youth Services of Tulsa. But Foster said she never received an opt-out form. Instead, she said Clark called her for permission to allow her daughter to visit the clinic.

Youth Services of Tulsa refused to answer questions, but the receptionist said she didn't know of any opt-out form for parents.

Church Militant further pressed Clark regarding how his school made sure parents knew what was being taught in the sex-ed class and what would be conveyed in the trip to the clinic. “We put out a statement,” Clark responded. “I'm really not going to answer any more questions in regard to that.”

Foster said she has not only been offended as a parent but has been deeply hurt by the whole incident. “So many people are saying negative stuff,” she said. “This has really taken a toll on me, seriously.”

President Richard Nixon enacted Title X, which funds contraception for minorities and those in poverty, as part of the Public Health Service Act in 1970. By 2010, Title X was disbursing $317 million in tax dollars, with Planned Parenthood receiving $80 million. Nixon believed in the “population explosion” myth. His administration inaugurated the Commission on Population Growth.

Planned Parenthood has been criticized for targeting minorities and “undesirables,” as founder Margaret Sanger called those she sought to sterilize. Foster is black.

This week, the Republican-led U.S. Congress passed a bill to allow states to redirect Title X funds away from Planned Parenthood.

Cassius Kamarampi of The Mind Unleashed commented, “The U.S. government has a long history of attempting to control the reproduction of citizens. … Because some powers seem to be obsessed with curbing population growth, lawmakers found it a priority to legalize children receiving contraceptives without parental permission.”

“As a 21-year-old American who remembers sexual education in Texas, I know for a fact that they fear-monger about STDs, push vaccination for HPV, contraceptives, and anything else they can in these so called lessons,” Kamarampi continued.  “I can personally tell you that several people were coerced into getting contraceptive implants in sexual education at my middle school in central Texas, and highly dangerous Gardasil vaccines were pushed as well, in 2009. I saw young, impressionable peers receive a sales pitch, and fear-mongering about HPV.”

The Norplant contraceptive implant has been connected to several health problems. Its chemical, Levonorgestrel, causes severe hormonal changes and cervical cysts. The implants have been known to dislodge and get lost in the woman's body, and in some cases cause permanent sterility.

Within six years of Norplant's 1990 FDA approval, more than 6,000 women filed complaints of “adverse medical consequences,” including heavy bleeding and vision impairment. Some overseas women were bedridden for months, some literally went blind, and some died because population control officials refused to remove the implants.

Norplant was taken off the U.S. market in 2002, but manufacturer Wyeth-Ayerst continued to produce it with U.S. tax dollars for vulnerable poor women in Third World countries until 2006. A new manufacturer, Bayer Healthcare, has renamed the drug and contracted with the United States Agency for International Development (USAID) to manufacture and distribute it to international population control groups.