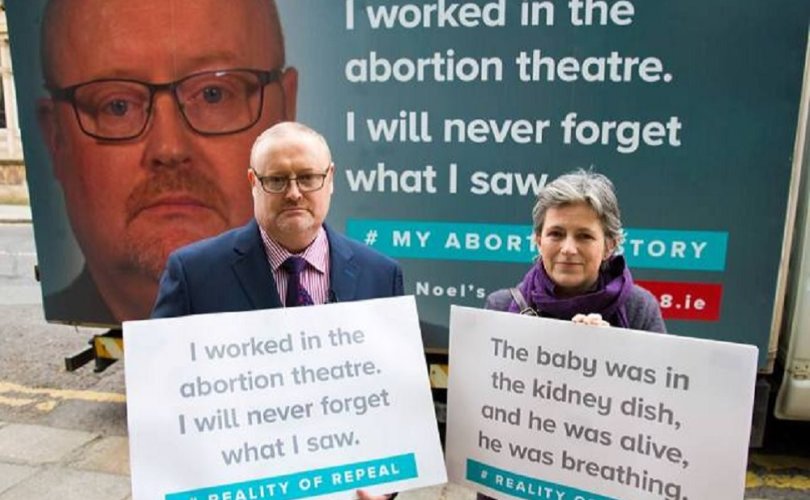 February 28, 2018 (SPUC) – “I often saw women coming in for abortion in great distress, and sometimes under obvious duress from their partners.”

The Save the 8th Campaign has launched a new platform to give a voice to those who have experienced firsthand the reality of legalised abortion.

The truth behind Repeal

The #MyAbortionStory shares the stories of former abortion workers, nurses who have seen children who survived abortion and women hurt by abortion and will include billboards and social media videos.

Two healthcare workers, who feature on the billboards, spoke at the launch event yesterday. Caren Ní hAllacháin, a nurse, told the press conference that she had witnessed a baby who survived an abortion, but had been powerless to help the child because abortion was legal and she was not permitted to intervene, while Noel Patrún recounted his experience in assisting with abortions in a UK hospital.

“It will haunt me for the rest of my life”

Ms Ní hAllacháin describes how, when working as an agency nurse in Sydney, she found a 22 week old baby struggling to breathe in a kidney dish, where he'd been left to die after an abortion. “I was a young nurse and I did not know what to do,” she said.

“Because this was an abortion I wasn't allowed to intervene, I couldn't get help for the baby, I couldn't hold him or comfort him, or get oxygen for him or ask anyone to help him live. To see that baby trying to breathe, and nobody helping him, was so distressing and it will haunt me for the rest of my life.

“I fear for nurses like me if this abortion proposal is passed, and for the culture it will create in Irish hospitals,” she continued. “I fear that doctors will be expected to sit in judgement on the value of a baby's life because of a suspected abnormality. There is a heart-breaking reality to repealing the 8th amendment and legalising abortion that is largely being ignored. I never want any nurse to see the heart-breaking reality that I saw.”

Noel Patrún, a psychiatric nurse who also worked as a scrub nurse for a considerable period of time in gynaecology & obstetric theatre units in the UK and who assisted in carrying out abortions said the Eighth Amendment was a “good law”, adding that mental health difficulties among women following terminations was a “silent epidemic in Britain”.

“I got placed in gynaecology and obstetrics theatre department, which also handled STOPs which are suction terminations of pregnancies,” he told the press conference. “I often saw women coming in for abortion in great distress, and sometimes under obvious duress from their partners. Many other women came in on their own, because men do not man up and take responsibility, sending women for abortion while they were nowhere to be seen. I heard patients say 'my boyfriend bullied me into this'. It began to prick my conscience that what was being described as a matter of choice felt more like women having no choice because they were being bullied and coerced into having an abortion.”

Mr Patrún also exposed the lack of conscience protection for healthcare professionals. “When I told my Charge Nurse however that I didn't want to do terminations anymore I was shocked and upset to find that, in reality, my right to opt-out of performing abortions was not protected. I continued to be restored to assist with abortions despite repeatedly stating that I did not want to do terminations anymore. I then became the target of persistent bullying, and experienced verbal attacks and psychological harassment which became more and more difficult to endure. In the end I was forced to leave my job.”