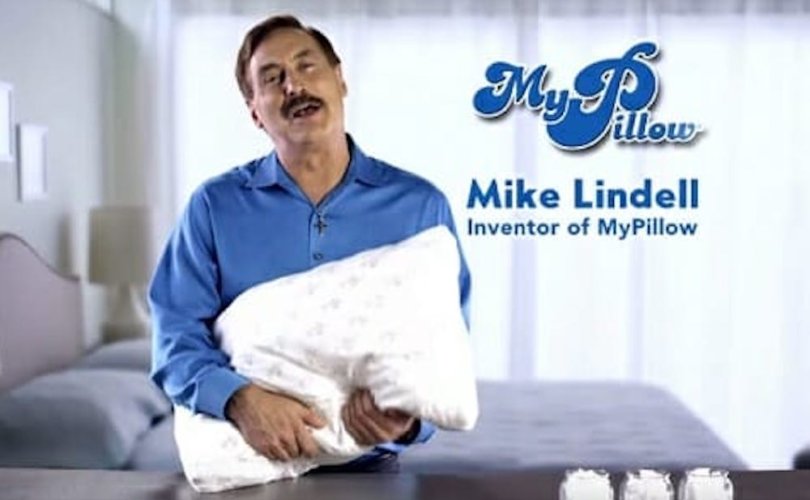 (WND News Center) – MyPillow officials have decided to pull their advertising campaign off the Fox News network, a decision that could have dramatic impact because of its $50 million annual cost, in a dispute over a promotion for a coming cyber symposium.

The Washington Examiner explained how MyPillow chief Mike Lindell directed his company to remove ads from Fox News programming over the issue, where the network refused to run the promotion.

“The ad he sought to have aired promotes his cyber symposium event that will discuss the 2020 election. Lindell has repeatedly asserted the election was fraudulent, claiming Dominion Voting Systems machines were manipulated to steal votes from former President Donald Trump. Election officials and the company have rejected the claims,” the report explained.

Lindell said the commercial just promotes a coming symposium, but he also has explained the event will offer his evidence of election fraud.

He has made the extraordinary offer of a $5 million payment to anyone attending the event who can disprove data “he claims demonstrate election fraud,” the report said.

A multitude of allegations and charges were made about election fraud following the strange results that had huge dumps of ballots – sometimes almost exclusively for Joe Biden – coming in dark-of-the-night hours after President Trump had been leading the race.

Judges up and down the system, however, declined to consider the evidence, dismissing the resulting claims on technical grounds.

Multiple audits of those results continue.

But what is not in dispute is that leftist Mark Zuckerberg of Facebook turned over some $350 million to mostly leftists that run various city, county and state elections systems to help them “run” the 2020 count.

And further, various state officials changed their state rules and laws regarding elections despite the fact the Constitution allows only state lawmakers to do that.

Fox’s statement said, “It’s unfortunate Mr. Lindell has chosen to pause his commercial time on FOX News given the level of success he’s experienced in building his brand through advertising on the number one cable news network.”

Both sides in the dispute, Fox and Lindell, have been sued by Dominion Voting Systems, which has claimed it was damaged by comments raising questions about possible fraud in the 2020 results.

Lindell responded with a lawsuit of his own against the company.

The Examiner noted MyPillow said it spent $50 million on advertising on Fox in 2020 and has spent $19 million already this year.

Lindell multiple times has confirmed he has acquired evidence of significant fraud in the 2020 election results.

He’s reportedly planning to reveal “terabytes” of those details at the symposium, which is to happen in South Dakota – and online – early in August.

It is promoted on Lindell’s website “Frank,” and politicians, cybersecurity experts and others have been invited.

Because of Lindell’s allegations about the election, Twitter has censored his speech.

In May Lindell held another rally – in Mitchell, S.D. – to celebrate the launch of Frank.

Lindell, in his lawsuit against Dominion, charges the company abused the legal process by suing him, violated the Racketeer Influenced and Corrupt Organizations Act, and violated federal law by depriving him of his civil rights.

At issue are contentions that the ballot count for the race that narrowly gave the victory to Joe Biden – by some 43,000 votes spread across a handful of states – included possible fraud.

The actual evidence from the close election, which included oddities such as states shutting down counting operations with President Trump ahead and restarting hours later with Biden in the lead, hundreds of sworn statements from witnesses of alleged fraud, odd middle-of-the-night ballot dumps and more, largely has not yet been evaluated by a court, as dozens of cases were dismissed on mostly procedural grounds.

Several states have tried audits, and the most advanced so far has been in Arizona, where GOP members of the state Senate subpoenaed the ballots and the counting machines.