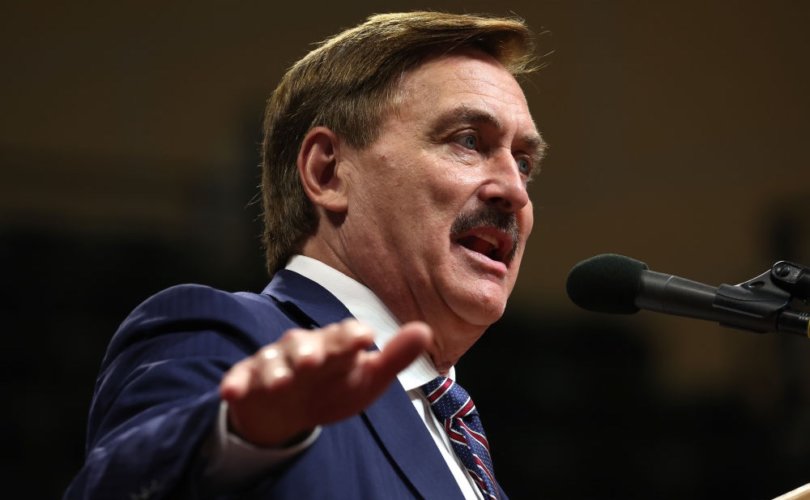 (LifeSiteNews) — MyPillow CEO Mike Lindell, a prominent Trump supporter who has consistently held that the 2020 election was rigged to benefit Joe Biden, said FBI agents approached him Tuesday and confiscated his cell phone. The news comes weeks after the FBI raided former U.S. President Donald Trump’s Florida home, and days after reports emerged that the FBI delivered subpoenas or search warrants to up to 50 Trump allies.

Lindell made the announcement during a Tuesday livestream, saying he had been approached by FBI agents while heading to Iowa for a hunting trip.

“I have my own breaking news tonight,” Lindell said, explaining that while stopping at a fast food restaurant in Mankato, Minnesota, “cars pulled up in front of us, to the side of us, and behind us, and I said, ‘Those are either bad guys or the FBI.’ It turns out they were the FBI.”

According to Lindell, one of the agents told him, “Well, I got some bad news. … we’re taking your cell phone, we have a warrant for your cell phone.”

Lindell said he attempted to avoid handing over his device, arguing that he relies on his phone because he runs “five companies off that,” doesn’t “have a computer,” and uses the device to operate his “hearing aids.”

RELATED: Biden’s DOJ is getting desperate now that the FBI raid of Trump’s Mar-a-Lago is under judicial scrutiny

“Everything runs off my phone,” Lindell said he told the agent.

The MyPillow CEO said he finally surrendered his cell phone after calling a lawyer who advised him to do so.

According to The New York Times, the FBI’s interaction with Lindell was related to his alleged ties to Colorado county clerk Tina Peters, who has been “accused of tampering with voting machines.”

Peters has pleaded not guilty to state charges related to an alleged effort to download data from election machines after the heavily-contested 2020 election.

Lindell’s comments regarding his interaction with the FBI come just over a month after FBI agents carried out an unprecedented raid on Donald Trump’s Mar-a-Lago home in Palm Beach, Florida.

Meanwhile, this isn’t the first time Lindell alleged he has been targeted over his support for Trump.

In January, Lindell said two banks wanted to cancel his accounts after the January 6 committee issued a subpoena for his phone records. He also said major retailers had opted to pull items from his MyPillow brand. Early last year, Lindell was permanently banned from Twitter.