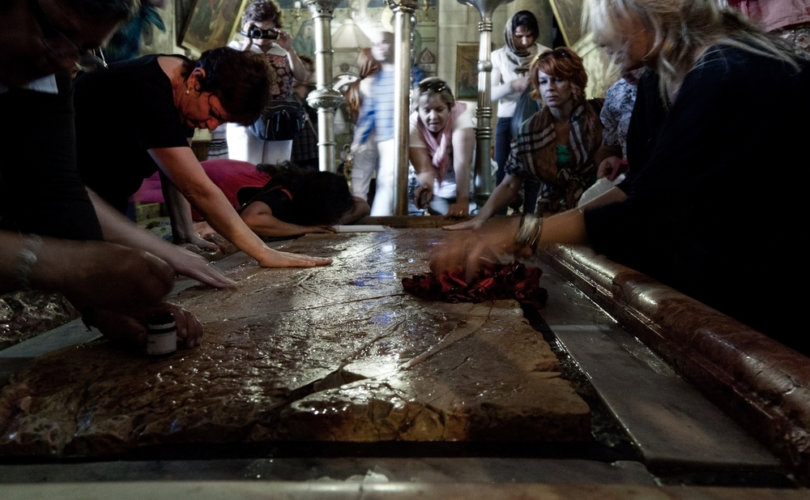 Pilgrims pray at the Stone of Anointing in the Church of the Holy Sepulchre in Jerusalem.Shutterstock.com

JERUSALEM, December 23, 2016 (LifeSiteNews) – At the end of October and for the first time in two centuries, the tomb where Christians believe Jesus was buried and rose from the dead was reopened amidst rumours of inexplicable phenomena.

The first of the rumours reported in Aleteia was that “It was possible to perceive a ‘sweet aroma’ emanating from the tomb,” just as there was at some Marian and saintly apparitions. The second was that the instruments being used to discover what structures lay under the floor of the church and the dimensions of the tomb “were altered by electromagnetic disturbances.”

According to Aleteia, “As soon as [the instruments] were placed vertically on the stone in which Christ’s body rested, the devices either malfunctioned or ceased to work at all.” Previous measures of depth were now proved equally faulty. All estimated the depth of the tomb to be much greater than it was.

Several dozen scientists and church officials had attended the Church of the Holy Sepulchre for the removal of the marble slab forming the roof of Christ’s tomb, a step deemed necessary in order to ensure the structure’s survival in the face of ongoing damage to the stone and mortar from seismic activity and moisture brought in by the 5,000 pilgrims visiting daily.

The tomb was covered over in 135 A.D. during the construction of a Roman temple, but uncovered by Emperor Constantine’s mother St. Helen, and marked by the first of a series of churches that have been pillaged and destroyed by Persians and then Muslims, and by fires, and then repaired, rebuilt and replaced by Christians.

The current structure dates from the late 1800s. Since then it has been jointly but fractiously managed by the Catholic Franciscans, and the Armenian and Greek Orthodox Churches. The permanent repairs begun in October took since the 1940s for the three churches to agree on. Since then iron rods held the tomb together “temporarily.” During the intervening years the three groups each agreed to repair different parts of the church’s structure, but they collaborated on the church’s dome.

An account in the New York Times contains comments from Father Isidoros Fakitsas, who was present at the opening of the tomb on behalf of the Greek Orthodox Patriarchate. He said, “We saw where Jesus Christ was laid down. Before, nobody has. We have the history, the tradition. Now we saw with our own eyes the actual burial place of Jesus Christ.” The priest made no mention of the “sweet aroma.” Nor does Aleteia name a source. It does undermine the aroma rumour with its own interview with Marie-Armelle Beaulieu, editor-in-chief of Terre Sainte Magazine, and a visitor during the 60-hour period the tomb was uncovered. “She did not perceive any particular perfume at all,” reports Aleteia.

However, Beaulieu confirmed the instrument failure as did one of the construction team leaders, Antonia Moropoulou.

Reports Aleteia: “It seems, lacking any other explanatory element, the tomb of Christ indeed affected instruments sensitive to electromagnetic disturbances. However, possible explanations on the motives for such a phenomenon do not fall short of speculation among those who are passionate about the Holy Sepulcher. And, needless to say, those speculations range from the most elaborate to the most ridiculous.”

There was an earlier controversy over how the project was reported by National Geographic, which partially funded the restoration, and subsequently by the Western news media, because their stories mostly left Jesus buried in the tomb, without mentioning His Resurrection and its centrality to the Christian faith. One called LiveScience wore its scepticism on its sleeve to the extent of questioning whether Jesus ever existed or was rather “a literary construct.”

Beaulieu describes an internal conflict over whether to genuflect when she neared the tomb. “I reflected and thought it was absurd, as there was no real Presence there, and that one should rather genuflect in front of the Blessed Sacrament. But in the Holy Sepulcher, in front of this tomb, there is a ‘real absence.’ An empty tomb. A miracle before which all knees bend, in Heaven, on Earth and in Hell.”