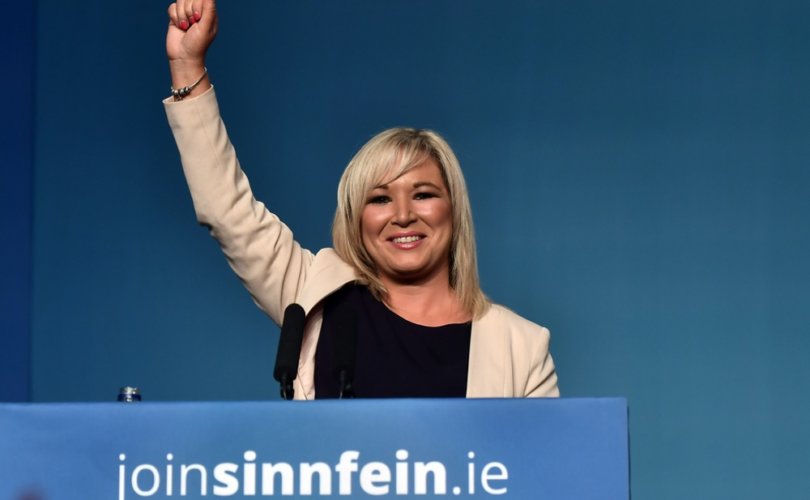 COUNTY TYRONE, Northern Ireland, January 20, 2020 (LifeSiteNews) – A Catholic priest in Northern Ireland has cancelled a meeting organized by the pro-abortion political party Sinn Fein which was scheduled to take place in his parish hall.

According to a press statement by Precious Life, a Northern Ireland pro-life organization, the decision to cancel the meeting came after Precious Life urged their supporters to ask that the meeting be stopped from taking place on Church property. The parish was then reportedly inundated with calls from pro-lifers and parish priest Fr. Eugene O’Neill cancelled the event.

“We welcome the cancellation of this meeting tonight,” said Bernadette Smyth of Precious Life. “We stand in solidarity with Fr. Eugene O'Neill and thank him for having courage in his convictions and taking swift action to ensure this meeting did not go ahead in Church property. Fr. O'Neill…has assured us that this meeting was never endorsed by Coalisland Parish in the first place, and was organised by Sinn Fein, without the permission of the Church. This meeting is no longer taking place in Church property, was not sanctioned by parish personnel and does not have the support of Church figures.”

Smyth cited an October 2019 statement from the Catholic Bishops of Northern Ireland.

That statement “makes the Church's position on abortion unequivocal,” she noted.

“As the bishops state, ‘abortion is a brutal violation of the precious gift of life. The right to life is not given to us by any law or government. Any human law that removes the right to life is an unjust law and must be resisted by every person, every voter, every political representative. For Catholic politicians this is not only a matter of protecting the human right to life but also a fundamental matter of Catholic faith.’”

Smyth added, “Fr. Eugene O'Neill has stood up for the faithful and strongly reaffirmed Church teaching. He has informed us he was not aware of this meeting, but that he contacted Sinn Fein, who have a radical pro-abortion position, to cancel this meeting as soon as people responded to our action alert.”

Smyth thanked O’Neill and his parish, as well as everyone who voiced concerns about the planned event.

“Fr. Eugene must be commended for taking a strong stand for life, and standing up against Sinn Fein's radical and cruel abortion agenda,” she said.

Catherine Sewell of the Tyrone Pro-Life Network told the Belfast Telegraph that she was grateful to Fr. O’Neill for “withdrawing permission” from Sinn Fein to use the hall for their meeting, which she said would have been used to “promote their radical pro-abortion policy.”

Sewell said that her group “got word late on Wednesday night that Sinn Fein were planning a meeting in the hall the next evening, at which Michelle ‘the north is next’ O'Neill, Francie Molloy and other prominent Sinn Fein politicians would expound upon recent developments.”

“As far as we are concerned, no pro-abortion outfit should be allowed to use Catholic Church property to crow about their role in bringing British abortion clinics into Tyrone,” she said.

Catherine added that she believes that “Sinn Fein politicians are deeply embarrassed by their party’s radical pro-abortion agenda and we believe that they are trying to use Catholic Church property in order to confuse the public into somehow believing that the Church is okay with their abortion policies.”

Liam Gibson, political officer in Northern Ireland for the Society for the Protection of Unborn Children (SPUC) and a pro-life leader in Ireland for nearly 20 years, told LifeSiteNews that “sooner or later Sinn Féin will realise that its pro-abortion policies have alienated a section of the Catholic and nationalist population who will neither forgive nor forget their betrayal of Northern Ireland’s unborn babies.”

“In July of 2019, the Westminster Parliament swept aside constitutional safeguards which recognised abortion as an issue to be dealt with through Northern Ireland’s devolved administration by overturning the law which had saved the lives of over 100,000 babies since 1967,” Gibson explained. “Although Sinn Féin rejects the authority of the London government to rule Northern Ireland, the party lobbied British politicians for the decriminalisation of abortion and welcomed the opportunity for unborn babies in Northern Ireland to be lawfully put to death.”

“Despite the fact that the London government is set to impose on us one of the most extreme abortion laws in Europe the pro-life movement remains as determined as ever. The battle to restore legal protection for our unborn children has already begun.”