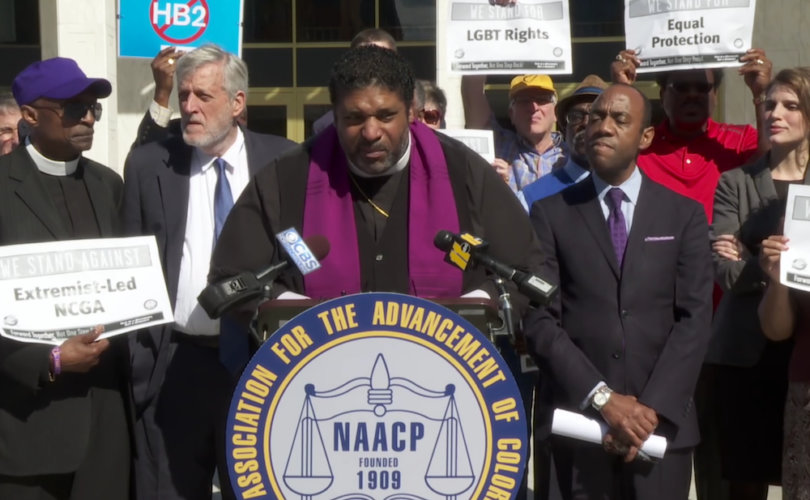 BALTIMORE, Maryland, February 27, 2017 (LifeSiteNews) — The National Association for the Advancement of Colored People (NAACP) is planning a boycott of North Carolina over its law (HB-2) requiring people to use the bathroom matching their biological sex.

The NAACP says the law amounts to “gender discrimination.” They are urging major sports teams and organizations, religious bodies and conferences, and music stars to refuse to schedule any activities in the state.

NAACP national president Cornell Brooks said at a press conference that “children … are being imperiled” by gender separate bathrooms. North Carolina chapter president William Barber called the state “a battleground … for the soul of America.”

The group equates homosexual and transgender affirmation with civil rights.

“The pro-abortion NAACP decries bathroom 'discrimination' but has no problem with the real and violent discrimination that results in more black babies being aborted than born alive,”

“Bathrooms are, by nature, gender discriminatory,” Bomberger explained. “If gender is fluid, why isn't 'race'?  Why isn't age?”

The NAACP governing board unanimously approved their boycott of North Carolina in protest of the state law (“HB-2”). They are creating a “task force” to oversee the boycott.

Barber said the boycott will not end until HB-2 is repealed, electoral districts are redrawn, and the newly elected Democratic Governor Roy Cooper is reinvested with powers rescinded by the Republican-led legislature.

The board's resolution threatens additional steps, including encouraging divestiture of North Carolina-related investments and boycotting all travel to the state.

“If the NAACP wants to promote the belief that self-chosen identification is all that matters, then what's to stop the race-switching, scholarship-stealing Rachel Dolezals of the world?” Bomberger rhetorically asked.

Bomberger was referring to the African studies instructor and a local president of an NAACP chapter in Spokane, Washington, who nine times reported to police that she was the black victim of hate crimes. But in 2015 her Caucasian parents revealed that she is white.

Since being exposed as lying on her biography, Dolezal admitted that she was born white but identifies as black. Her defenders contend her racial identity is “genuine,” even though it is not based on genetics, biology, or actual ancestry.

Last month, Dolezal’s mother told KREM news: “Rachel has wanted to be somebody she's not.” Dolezal is genetically German, Czech and Swedish, with a “smattering” of Native American ancestry.

Dolezal also was dismissed from the Spokane police ombudsman commission over “a pattern of misconduct” and was forced to resign as education director for Idaho's Human Rights Education Institute over accusations of “discrimination.” She told Vanity Fair in 2015 that she was making a living braiding and weaving hair three times a week.

In 2000, the NAACP boycotted South Carolina over flying the Confederate flag, which was eventually removed in 2015.

The NAACP also sued over a North Carolina voting law requiring a photo ID. The lawsuit was upheld by a federal appeals court. That appeal is before the U.S. Supreme Court.