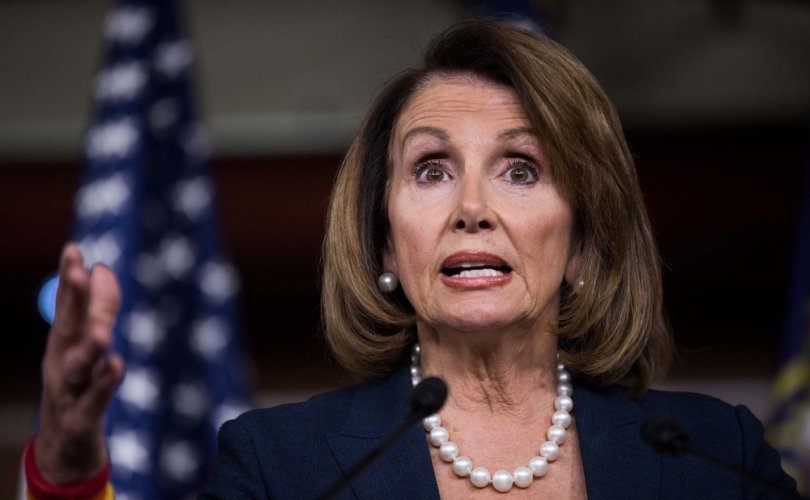 WASHINGTON D.C, January 20, 2021 (LifeSiteNews) – The pro-abortion Speaker of the House, Nancy Pelosi, has launched an attack on Catholics for their support for Trump’s pro-life polices, claiming that they were selling out “democracy” due to their opposition to the murder of the unborn.

Pelosi made the comments a few days ago, when speaking to Hilary Clinton on the failed 2016 presidential candidate’s podcast “You and Me Both.”

The Speaker of the House made her attack upon Catholics, shortly after declaring Joe Biden to be a “unifier” for the country, saying that “women and minorities and LGBTQ people can thrive.”

However, the pro-abortion, Catholic Speaker of the House, revealed she believed that President Trump had been elected due to his pro-life stance: “I think that Donald Trump is president because of the issue of a woman’s right to choose.”

She then proceeded to attack pro-lifers for not supporting the impeachment of the president.

“When he signed that paper saying, ‘These are the judges that I will appoint,’ that was the dog whistle to the Evangelicals, to the Catholics, and all the rest. A woman will not have the right to choose,” Pelosi continued.

“When you see the polls about impeachment now, 80 percent think what happened was wrong; 70-some percent said he’s responsible, but 40-some percent don’t think he should be impeached. Well, why? One issue: abortion.”

Pelosi went so far as to say that support for Trump from pro-lifers is a source of “great grief” for her “as a Catholic.”

“They were willing to sell the whole democracy down the river for that one issue,” Pelosi said.

Clinton was swift to agree with Pelosi, and suggest that Democrats were better at protecting the unborn by lowering the number of abortions through the promotion of contraception and sex education.

“One of the terrible ironies of their position is that starting in the 90s under Democratic presidents, the abortion rate went way down,” the former Democrat presidential candidate said. “And with proper contraception and education and a stigma-free conversation, the numbers can continue to go way down.”

Clinton also claimed that the pro-life cause had been “used” by people who “do not view this issue as a priority” in order to “obtain and use power.”

“If you reject terminating a pregnancy, you should love contraception,” Pelosi added, before seemingly talking up her “Catholic credentials” while explaining that she gave birth to five children in six years.

“And again, there’s a great deal of hypocrisy here, because many of these people, of course, are not having thirteen children. And as somebody who had five children almost exactly to the day in six years, I said to my colleagues, when you have five children in six years, you come around and talk to me as a Catholic.”

Despite attacking those who adhere to the Church’s teaching regarding the sinful nature of abortion, Pelosi has previously described herself as being “with the program” of the Catholic Church. However, in 2015 Archbishop Salvatore Cordileone, Pelosi’s local bishop, responded to her repeated refusal to say whether an unborn child at 20 weeks is a “human being” by reminding Pelosi that “no Catholic can dissent in good conscience” on abortion.

Pelosi’s phraseology is also worthy of note. Her words “sell the whole democracy down the river” are of course an appropriation of the phrase “sold down the river,” with origins linked to the slave trade, and the sale of slaves to go down the Mississippi river. Her use of the phrase is of special observation, since it has received criticism from left-wing media and individuals, particularly in the time since the Black Lives Matter riots during the summer of 2020.

CNN included the phrase amongst a list of words and phrase which it said demonstrated the “systemic racism” in the country, and which should be dropped from use. CNN also reported that Jamaal Muwwakkil, a PhD candidate in linguistics at the University of California, Santa Barbara, said that the phrase “takes away the weight of the reality of chattel slavery.”

U.K. based BBC also included the phrase as one to be avoided, when giving training to its employees last year.