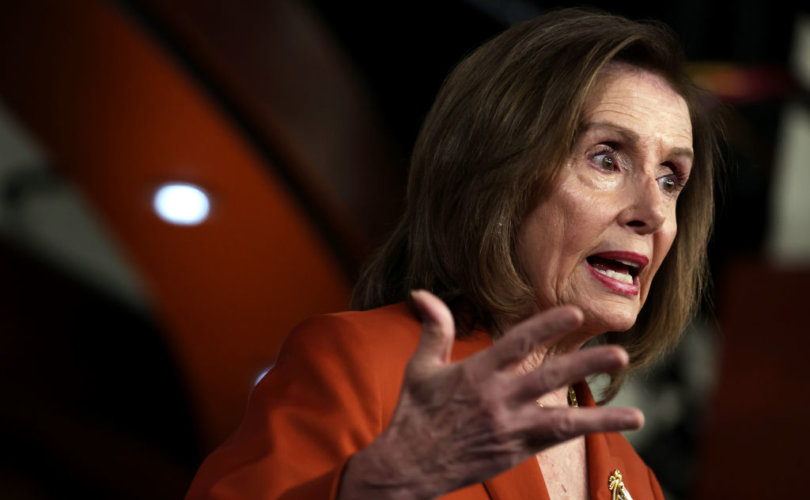 SAN FRANCISCO, California (LifeSiteNews) – Speaker of the House Nancy Pelosi has once again criticized the pro-life movement, calling its efforts to save unborn babies “sinful.”

“It’s wrong that they would be able to say to women what they think women should be doing with their lives and their bodies. But it’s sinful, the injustice of it all.”

The House Speaker emphasized August 26 as a “day of action throughout the country because it’s Women’s Equality Day.” She added that the day was about “women saving our democracy.”

In her sometimes rambling and unclear speech, Pelosi referred to the natural state of pregnancy and of giving birth as “unimaginable pain.”

Referring to California’s commitment to abortion, Pelosi said, “We take pride in California’s leadership on reproductive health, as I mentioned. A beacon of hope and refuge in a time of widespread fear. Emboldened by the radical Supreme Court, extreme MAGA Republicans are inflicting unimaginable pain on women and their families.”

A self-described devout Catholic, Pelosi seemed to conflate contraception, the attempt to prevent the conception of a child, with abortion, the killing of the unborn child, and suggested pro-life Americans are inspired by a “crusade of punishment and control.”

“There’s a battle being waged, a crusade of punishment and control,” Pelosi declared. “It’s funny, they don’t like birth control, but they want to control women’s lives.”

Pelosi stated that Republicans taking leadership in Congress would lead to “a national ban on abortion” and cited pro-life Justice Clarence Thomas’ observation that, following the overturning of Roe v. Wade, legal rulings on same-sex marriage and contraception should be revisited. However, Pelosi didn’t see this in terms of law, as Thomas does, but in terms of  “personal freedom.”

“Justice Clarence Thomas, Clarence Thomas, made it very clear, too, this isn’t all that is there. It’s about marriage equality. It’s about a woman’s right to choose, contraception. It’s about other aspects of personal freedom,” she said before acknowledging that Republican women voters are not choosing pro-abortion legislators.

“So, it’s really important that we know that women turning out and electing pro-choice legislators, whether they’re Democrats or Republicans,” she said. “But the fact is, right now, they’re Democrats. We would love this to be bipartisan. So far, we don’t see that.”

Pelosi also claimed “birth control” is a federal right. She also suggested same-sex “marriage” is an aspect of so-called “reproductive freedom,” which normally a euphemism for abortion.

“… [W]e’ve passed Roe v. Wade to be enshrined into our Constitution, establish, again, the federal right to birth control, reaffirm freedom to travel and we have more to do,” she said. “And even other aspects of reproductive freedom in terms of LGBTQ marriage equality and the rest.”

Pelosi even attempted to fight for abortion under the suffragists’ banner.

“Now, I have spent a great deal of time on this [topic of abortion], because it is the current manifestation of freedom for women. That the women, the suffragists fought so hard for,” Pelosi said.

Famously, Elizabeth Cady Stanton and Susan B. Anthony and other suffragists opposed abortion. In 1869 the American suffragist newspaper Revolution published an article condemning abortion as the “horrible crime of child-murder.”

In her speech, the Speaker also claimed to have had a mystical experience during her first meeting at the White House as the leader of the House Democrats. According to Pelosi, she felt the presence of several heroines of the American women’s movement.

“Anyway, I sit down, and [President Bush is] welcoming me and all that. And all of a sudden, I felt very closed in on my seat…It was – I never felt this before. I was closed in on my seat. And all of a sudden, I realized it was Elizabeth Cady Stanton, Lucretia Mott, you name them, Sojourner Truth, Alice. All – everybody was on the seat with me. And I could hear them say: ‘At last, we have a seat at the table’.”

Meanwhile, Pelosi maintained that pro-life legislation is an attack on women and must be resolved by women’s equality and political participation.

“The more diversity, more inclusion that we have in any of the decision making, the better our policy will be, and the better we can fight these assaults,” she said. “Hostility—this is hostility to women. And on this Women’s Equality Day, we’ll fight back. Hostility.”

Throughout her time in politics, Pelosi has repeatedly and publicly denounced the fight for the right to life, despite her accompanying claims that she is a practicing Catholic. However, her abortion advocacy has met with opposition. Several U.S. bishops, including San Francisco Archbishop Cordileone, have banned her from receiving Holy Communion until she publicly repents of her work to secure access to abortion and contraception.

The Speaker of the House has also refused to acknowledge the violent targeting of pro-life pregnancy centers in the weeks leading up to the Supreme Court ruling of the Dobbs case. In January 2020, pro-life Americans were arrested for a sit-in outside Pelosi’s office in Washington, D.C., calling attention to her support of infanticide.

Following the overturning of Roe v. Wade, Pelosi and the Biden administration continue their attempts to keep the abortion industry afloat. A month after the Supreme Court’s historic ruling, a “public health emergency declaration” was considered to ensure abortion pill providers were cleared of all liability, including in those states in which abortion is now, thanks to the reversal of Roe v. Wade, illegal.

The Biden administration is also pursuing the possibility of using Medicaid, which is funded by taxpayers, to cover travel expenses for women seeking out-of-state abortions.