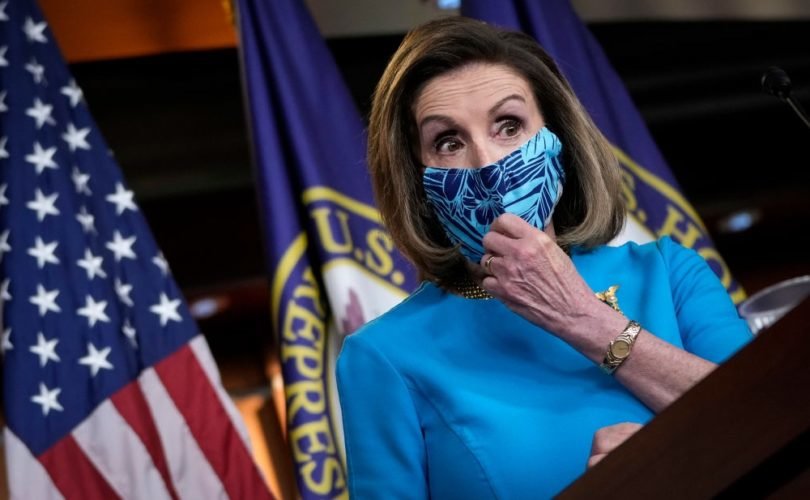 Speaker of the House Nancy Pelosi (D-CA) speaks during her weekly news conference at the U.S. Capitol on April 22, 2021 in Washington, DC.Drew Angerer / Staff / Getty

WASHINGTON, D.C., July 23, 2021 (LifeSiteNews) – Pro-abortion Speaker of the House Nancy Pelosi (D-CA) spoke in favour of tax-funded abortion Thursday, describing it as “an issue of fairness and justice” after calling herself a “devout Catholic” and a mother of “five in six years.”

The comment came as a response to a question at her weekly press conference at the House of Representatives, about the Republican-backed No Taxpayer Funding for Abortion and Abortion Insurance Full Disclosure Act of 2021. The bill prohibits the use of federal funds for abortions or for health coverage that includes abortions.

When first asked about the bill, which Republicans have brought to the House floor 37 times only to be blocked by Democrats every time, Pelosi mistakenly assumed that the question was referring to the Democrat spending bill which seeks to overturn the Hyde Amendment, a legislative provision which has blocked federal Medicaid funding for most abortions since 1976.

Commenting on the plan to overturn the Hyde Amendment, Pelosi explained, “we think it is the right thing to do. It is something that many of us have been concerned about for a long time, as an issue of health, as an issue of fairness.”

When asked about the Republican bill, Pelosi argued that a direct prohibition on abortion funding is already “in the law. There’s no need to have that. That is the law now.” She quickly added: “what we have in our bill is to overturn that.”

While technically true that Hyde already prohibits direct funding of abortions except for cases of rape, incest, or threats to a mother’s life, as a budget amendment it relies on lawmakers to agree to renew it every year, whereas a legislative ban would make the prohibition permanent unless and until Democrats gathered the votes to repeal it.

She went on to justify repealing the Hyde Amendment as “an issue of health for many women in America” and “something that has been a priority for many of us (Democrats) for a long time.”

But perhaps the most shocking comment came when Pelosi described herself as a “devout Catholic” who has been blessed by God with many children.

“It’s an issue of health of many women in America…and it is something that has been a priority for many of us…as a devout Catholic and mother of 5 in 6 years, I feel that God blessed my husband and me with our beautiful family…”pic.twitter.com/iKeCcWA5y0

“As a devout Catholic and mother of five in six years, I feel that God blessed my husband and me with our beautiful family,” Pelosi said. “But it’s not up to me to dictate that that’s what other people should do. And it’s an issue of fairness and justice for poor women in our country.”

Though she calls herself a devout Catholic, Mrs. Pelosi is well known for her pro-abortion stance. Only last month, she ducked a question from a reporter who asked her if a 15-week-old unborn baby is human. Pelosi refused to answer directly, instead using the occasion to publicly express her support for Roe v. Wade. On that occasion too, she mentioned her children in an argument in favour of “a woman’s right to choose.”

“Let me just say that I am a big supporter of Roe v. Wade,” she said at the time. “I am a mother of five children in six years. I think I have some standing on this issue as to respecting a woman’s right to choose.”

When reporter Julia Johnson attempted to press Pelosi further by repeating the question, the Speaker of the House ignored her and took questions from other reporters.

Following Pelosi’s last comments on abortion, Archbishop Salvatore J. Cordileone of San Fransisco issued a statement condemning her views and pointing out the irony of her comments.

“No one can claim to be a devout Catholic and condone the killing of innocent human life, let alone have the government pay for it,” he said. “To use the smokescreen of abortion as an issue of health and fairness to poor women is the epitome of hypocrisy: what about the health of the baby being killed?”

His Excellency also addressed the fallacious “pro-choice” argument by calling for more support for poor mothers: “What about giving poor women real choice, so they are supported in choosing life?”

Pelosi’s Thursday comments shed more light on the Biden administration and congressional Democrats’ intent to get rid of the Hyde Amendment. A plan which, were it to succeed, would mark the end of a policy which is estimated to have prevented more than 2 million abortions over the past 40 years.